It was supposed to be a week celebrating basketball in Asia, with some of the sport’s top stars due to play preseason games and host charity events in Japan and China. But the escalating showdown between the NBA and Beijing over free speech is fast becoming the latest hot potato in deteriorating Sino-U.S. relations.

That Morey’s tweet received a furious backlash in China is hardly surprising. But it’s the muddled and inconsistent response by the NBA, its teams and owners that threatens to cast the spat as an inflection point undermining sport’s time-honored apolitical, and thus unifying, role.

“The most disappointing thing about this whole incident is that sport does appear to be tarnished,” says Mark Dreyer, a Chinese sports industry analyst. “It’s not even neutral any longer but actually seen as a negative.”

Initially, the NBA said it was “extremely disappointed” by Morey’s “inappropriate” tweet, while Rockets owner Tilman Fertitta insisted his general manager doesn’t speak for the team. But this prompted American NBA fans, as well as politicians on both side of the aisle, to accuse the league of shameless kowtowing to a totalitarian Chinese Communist Party (CCP) for the sake of revenue. NBA commissioner Adam Silver later backtracked, supporting Morey’s right “to exercise his freedom of expression.”

Profit versus principle is, of course, a timeless quandary, though one thrown into ever-sharper focus as the global economy slows and the world’s number two becomes more repressive and thinner skinned.

Certainly, Silver’s U-turn in the face of domestic pressure ended any prospect for a quick resolution. A statement by CCTV announcing the suspension of broadcasts said, “We believe any speech challenging national sovereignty… is outside of the realm of freedom of speech.” Meanwhile, Brooklyn Nets owner Joe Tsai — the Taiwanese-Canadian co-founder of Alibaba — accused Morey in a lengthy Facebook post of “supporting a separatist movement,” borrowing straight from the language of the CCP.

Chinese basketball fans were just as uncompromising. “You only have a home after you have a country,” Mr. Wang, a businessman who has supported the LA Lakers for over a decade, tells TIME. “When our sovereignty is challenged, not watching the NBA isn’t a big deal.”

While soccer remains China’s national sport, basketball is arguably more popular among young, urban Chinese. Some 300,000 regularly shoot hoops, while almost half a billion Chinese watched an NBA game on television last year. China is the NBA’s second biggest market — Tencent’s streaming deal alone is worth $1.5 billion — and one of its main avenues for growth. But that opportunity comes with strings attached.

In recent years, international brands as diverse as Marriott Hotels, Daimler, Swarovski and Samsung, as well as fashion labels Gap, Givenchy, Coach and Versace, have all been forced to apologize for perceived slights that damage their China business interests.

In today’s China, under the jingoistic rule of strongman President Xi Jinping, nobody can afford to have their patriotism called into question. In the wake of the Versace scandal, which like many of the above erupted after the brand suggested that the Chinese special administrative regions of Hong Kong and Macau were independent states, a slew of top Chinese celebrities cut ties with the fashion house.

The NBA spat has prompted a similar chill. Chinese sportswear brand Li-Ning, Tencent, Shanghai Pudong Development Bank and the Chinese Basketball Association (CBA) all dropped ties with the Rockets. The latter particularly stings given that CBA’s current chair is none other than Yao Ming, China’s most successful basketball star, who played for the Rockets from 2002 to 2011, and helped transform it into one of the NBA’s most popular teams in China.

It remains to be seen what happens next. For now, the two scheduled games in Shanghai and Shenzhen — both between the LA Lakers and Brooklyn Nets —remain on track (even if no Chinese outside the arena will be able enjoy them.) Silver is expected in China today and will hope to smooth things over with Yao and other stakeholders. But the “nuclear option” would be for CCTV and Tencent to expand their coverage suspension into the NBA season proper, which begins Oct. 22, says Dreyer.

“I would be staggered if that happens,” Dreyer adds. “But you just don’t know, because once it becomes a political situation, other rules are followed.”

It’s certain to not be the last moral quandary to beset foreign companies chasing China’s 1.4 billion potential customers. As China regresses on human-rights, censorship and myriad other issues, U.S. firms turning a blind eye to egregious abuses — not least the imprisonment of over a million ethnic Uighur Muslims in restive Xinjiang province — to maintain their China business will alienate customers at home. For one, Google’s plan to return to China with a search engine that complies with Chinese censorship was shelved following a very public staff revolt.

Of course, that sport has been thrown into the spotlight is unfortunate, given it has historically served as a key soft power avenue for building bridges between political adversaries. North and South Korea marching under a united flag at the 2018 Pyeongchang Winter Olympics helped mend ties between the estranged neighbors, despite them technically remaining at war. In China, the thaw with the West that began in the 1970s with ping-pong diplomacy gathered pace over the following decades with the swelling popularity of the NBA, Premier League Soccer and even NFL in the Middle Kingdom.

But in recent years political rapprochement has slowed and even regressed. The U.S. under Trump has taken aim at China’s economy and key industries amid what analysts have dubbed a “new cold war.” The E.U. earlier this year branded China a “systemic rival.” Not even sport, it seems, can escape this chill. As one netizen mused on Chinese social media Wednesday, “The China-U.S. relationship started with table tennis and ends with basketball.”

—With reporting by Zhang Chi/Beijing 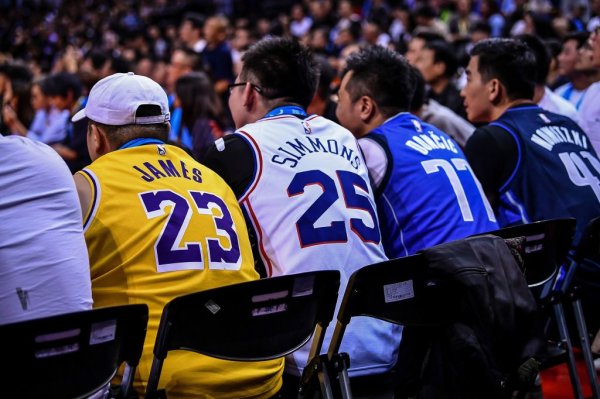 How a Quickly-Deleted Tweet About China Got Pretty Much Everyone Mad at the NBA
Next Up: Editor's Pick