Less than three days after ex-Dallas police officer Amber Guyger was sentenced to 10 years in prison for murdering Botham Jean in his own apartment, a key witness in the case was fatally shot.

Joshua Brown was killed Friday night at a Dallas apartment complex, as confirmed to TIME and originally reported by the Dallas Morning News.

The Dallas Police Department told TIME that law enforcement responded to a report of a shooting at a Dallas apartment complex just after 10:30 p.m. on Friday and found the victim “lying on the ground in the apartment parking lot with multiple gunshot wounds,” but did not identity the victim. Spokesperson Kimberlee Leach with the Dallas County District Attorney’s Office confirmed to TIME that the victim was Brown.

The victim died from his injuries at Parkland Memorial Hospital, police said in a statement. Several witnesses had heard gunshots and noticed a silver four-door sedan speeding away from the parking lot, police said. But authorities did not provide more details about the suspect and noted that no one is currently in custody.

Brown, who was also Jean’s neighbor, testified during Guyger’s trial that he met Jean for the first time the same day that he was shot on Sept. 6, 2018. After talking in his testimony about how he would hear Jean singing gospel or Drake songs inside his apartment, Brown became emotional and had to take a break from questioning.

Lee Merritt, a civil rights lawyer who represented the Jean family during trial, has spoken extensively on social media about Brown’s death, and said “his murder underscores the reality of the black experience in America.”

“A former athlete turned entrepreneur—Brown lived in constant fear that he could be the next victim of gun violence,” Merritt said, adding that Brown’s mother asked that he “do whatever it takes to get to the bottom of his murder.”

Brown’s death has also elicited concern from politicians. Alexandria Ocasio-Cortez tweeted on Sunday that “just when when we caught a glimpse of justice for Botham Jean, much of it feels stolen back with the murder of Joshua Brown.”

Jean’s trial has received national attention in the midst of a nationwide debate about police misconduct against people of color as Guyger is white and Jean was black. 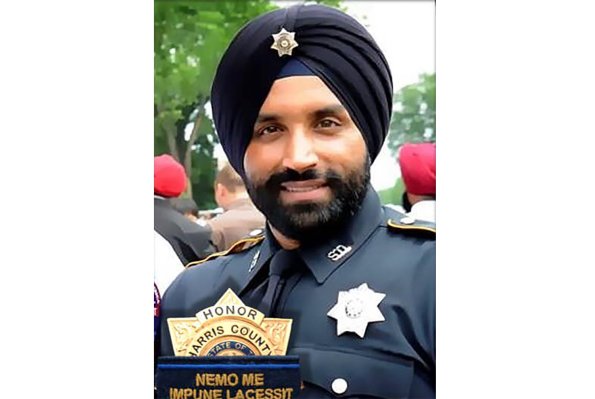 'Trailblazer' Sikh Deputy Killed on Duty in Texas
Next Up: Editor's Pick