'Companies Should Not Be So Greedy.' Some in the Oil and Gas Industry Fear Trump's Aggressive Deregulation Could Haunt Them

Demonstrations erupted at COP24 after Wells Griffith said the U.S. will not be rejecting coal mining or fossil fuel use in Katowice, Poland on Dec. 10, 2018.
Beata Zawrzel—NurPhoto/Getty Images
By Justin Worland

President Trump touted his deregulatory agenda on climate and energy in a speech in Pittsburgh Wednesday, describing his support as key to the industry. “We’ve ended the war on American energy,” he said, surrounded by energy workers in hard hats. “You were under assault.”

Trump’s energy agenda, which includes backing pipeline projects and a planned withdrawal from the Paris Agreement, has indeed delivered a short-term boost to some sectors of the fossil fuel industry. But not all industry executives—the intended beneficiaries of Trump’s rollbacks—are celebrating the massive scope of his deregulatory agenda. Many worry that public backlash over the industry’s role in causing climate change, as well as its reputation as an ardent opponent of environmental regulations, poses a serious, long-term threat to their business.

This frustration was on full display at an American Petroleum Institute (API) event in Washington D.C. last month. The influential oil and gas industry trade group billed the event as an opportunity to cheer U.S. natural gas exports. But many in attendance were eager to discuss how to deal with increasing pressure to act on climate change. “We’re fighting pitched battles all over the place,” said Brian Kelly, vice president of federal government affairs at Sempra Energy, a natural gas company, at the event. “I don’t have a solution for how to deal.”

Fossil fuel executives don’t agree on what to do. Some players argue that the industry should double down on its messaging touting natural gas as an economic and environmental winner while fighting the activist agenda tooth and nail. “It’s very important that we talk about the benefits,” Kelly said. But others recognize that old talking points aren’t resonating with consumers increasingly concerned about the catastrophic impact of climate change.

“Arguments along the lines of bridging fuel, energy security, and your iPad, your iPod is made from plastic…that just doesn’t work,” said Octávio Simões, an advisor to the CEO of Tellurian, a Texas natural gas company, at the API event.

Bigger companies, like BP, are more likely to support limited climate regulation like methane rules than small ones because their deep pockets make it easier to meet regulatory costs. And European oil and gas firms are more likely to see a future beyond oil and gas than their American counterparts, in large part because of pressure in their home countries.

That division came to a head earlier this year when the Trump Administration rolled back rules requiring oil and gas companies to halt methane emissions, the second-most common greenhouse gas. The move from the Environmental Protection Agency (EPA) was a win for small producers, many of which are saddled with debt and don’t want to pay to capture methane. But several big oil companies protested, arguing that addressing methane emissions would make natural gas more credible as a low-carbon energy source. “We have to reduce methane emissions for natural gas to realize its full potential,” said Susan Dio, president of BP America, in an emailed statement at the time.

At the API event, International Energy Agency (IEA) head Fatih Birol, a frequent guest at industry events, offered some tough love, warning that the industry risks going the way of coal—bankrupt and irrelevant—if it doesn’t deal with methane. “Companies should not be so greedy,” he said, calling addressing emissions from methane an “asset protection strategy.”

Some bolder measures to fight climate change have also won the support of the oil and gas industry. Most significantly, carbon pricing measures like a carbon tax, which target emissions reductions by imposing a cost on polluting, have gained some support among industry players. A handful of oil majors, BP, ConocoPhilips, ExxonMobil, Shell and Total, are supporting a coalition pushing a proposal for a carbon tax at the federal level that would distribute the revenue back to taxpayers. (That group also includes other major corporations like Microsoft and environmental groups like the Nature Conservancy). But many other oil and gas companies remain opposed, fighting anything that might reduce their profit margin.

The discord leaves powerful lobbying groups in a strained position. Denying climate change is no longer viable, but trade groups often end up supporting the policy views of their lowest common denominator. They try to bridge the gap by offering positive messaging about supporting a cleaner environment that’s notably light on details. In the days leading up to Trump’s speech, for example, API blasted out emails to reporters highlighting the role natural gas has played reducing emissions, praising the launch of a Senate climate group looking into potential bipartisan climate solutions, and saying that when it comes to climate change “we’re on it.”

A decade ago, support for regulations or a carbon tax might have earned oil and gas companies applause, but it will take more today to quell growing activist demands. One reason for that reticence, climate activists say, is that they simply distrust the industry, which over the past several decades has engaged in a concerted campaign to obscure the science of climate change. Just this week a group of researchers released a new report outlining the industry’s methods ahead of a Congressional hearing on the topic next week. “The rhetoric has evolved to keep up with the times,” says Geoffrey Supran, a researcher at Harvard University who worked on the report. “But, frankly, the same patterns exist.”

But another explanation for the tough demands is just the science: incremental policy shifts aren’t enough anymore. A landmark report released last year by the Intergovernmental Panel on Climate Change (IPCC) showed that energy systems around the world need to shift dramatically to keep temperatures from rising more than 1.5°C by the end of the century, the maximum level of warming that scientists say could stave off some of the worst impacts of climate change. The planet has already warmed 1°C since the dawn of the industrial age, and oil and gas use would likely need to decline dramatically to meet the 1.5°C target.

Massachusetts Senator Elizabeth Warren and Vermont Senator Bernie Sanders, who are polling alongside former Vice President Joe Biden in a close race for the Democratic presidential nomination, have both said they would ban fracking as part of a suite of policies targeting the industry. And this week, a case claiming ExxonMobil misled investors about the risk climate change poses to its business went to trial in New York. “Until they tender business plants that are consistent with 1.5°C warming and their share of the carbon budget,” says Ellen Dorsey, executive director of the Wallace Global Fund, a non-profit that funds environmental campaigns, “they must lose their social license to operate.”

Support for nearly any environmental rule puts companies at odds with President Trump, who regularly claims the climate measures amount to a “war” on American energy. On Wednesday, Trump hinted at how he might address the issue in next year’s presidential campaign. Instead of denying the science of climate change, he claimed that climate measures would increase the cost of energy and harm the economy. “The shale revolution saves Americans $203 billion every year,” he said. “Despite these terrific benefits, many politicians in our country are targeting your industry and your jobs for literally total destruction.”

Trump is right that the transition away from fossil fuels will come with growing pains, especially in places that rely heavily on the energy industry. But the science is also clear that simply not addressing the issue will bring much worse economic catastrophe, from submerged cities to mass migration fueled by extreme weather. The fossil fuel industry is just starting to grapple with their new reality: it may be economically painful to take on new regulations; but soon they may not have a choice. 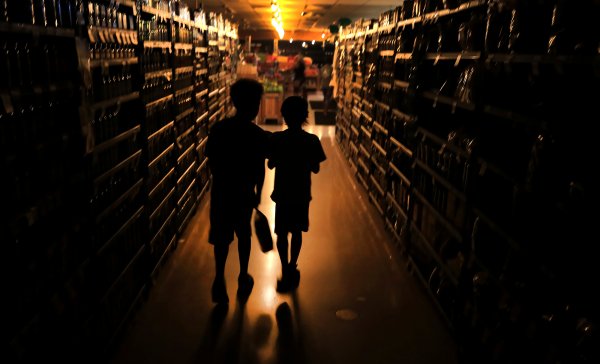 What to Know About the Kincade Fire in Sonoma County
Next Up: Editor's Pick