Louis Theroux, Britain's Documentary Trailblazer, Turns the Spotlight on Himself

The fever swamps of conspiracy have a hold over mainstream discourse now.’—Louis Theroux
Paul Marc Mitchell
By Suyin Haynes/London

Within minutes of our meeting in a central London coffee shop, Louis Theroux starts peppering me with questions. How I am, how I came to be in this job and where I’ve traveled from to meet him. He’s friendly yet persistent, the approach he’s built a career on. Within a matter of minutes, and without meaning to, I find I’ve revealed to him my abridged autobiography.

Such is the award-winning technique of Theroux, 49, widely regarded as the face of modern British documentary filmmaking. For the past 25 years, he has been making and presenting television programs featuring quirky subjects, ranging from UFO investigators to committed Nazis, Miami megajail inmates to big-game trophy hunters. Persuasive but not pushy, challenging but not judgmental, his knack for convincing his interviewees to (often unwittingly) reveal more of their psyches has endeared him to millions of viewers around the world. Whether speaking to a transgender woman and her cellmate about their relationship inside San Quentin prison, or asking a member of the Phelps family why she exiled herself from the incendiary Westboro Baptist Church, Theroux elicits poignant, genuine responses.

Now Theroux has become his own subject. His new book, Gotta Get Theroux This, is a memoir of his life and career on camera, from his early days in 1994 as a fresh-faced correspondent for Michael Moore’s satirical NBC news show TV Nation. Putting himself in the hot seat does not come naturally, he says. “I’ve made it my habit to be slightly invisible in my programs. Although I’m on camera, I don’t really give that much of myself. I think that’s what’s needed, because of the nature of the programs. I’m a straight man in a world that is somewhat weird, mysterious, dangerous or just emotionally charged in one way or another.”

Theroux was born in Singapore in 1970 to an American father (the writer Paul Theroux) and British mother, and eventually settled in London. He and his brother Marcel, now a writer, were encouraged to be interested in the world, and grew up spending summers in Cape Cod with their American family. “That was a big thing growing up: you weren’t tribal. [My parents’] outlook was very much cosmopolitan, striving to be open-minded, unblinkered as to how other countries and other cultures see the world.”

Those themes run clear through Theroux’s films, in which he is often a slightly bemused bespectacled British observer interacting with people living in unusual worlds or subcultures. “I think we have a tendency to settle in certain ways of thinking, or select data sets that confirm prejudices we have on a given subject,” he says. To upend these assumptions, several of his programs bring dimensions to subjects that a viewer might not expect. One program focusing on convicted sex offenders showed a woman welcoming Theroux into her home with a crumb cake while wearing an ankle monitor, telling him the hardest part about being on parole is being separated from her children. “I’m interested in those inconvenient bits of data, or those points at which you are forced to acknowledge that something does not fit the template or the paradigm.”

In 1998, the BBC aired Louis Theroux’s Weird Weekends, in which he spent time with people on the extreme fringes of American society—right-wing militia members, UFO enthusiasts and porn stars. Four years later, When Louis Met … , a series of interviews with high-profile British personalities, would follow. One of these was When Louis Met … Jimmy, in which Theroux spent time with then popular entertainer and television presenter Jimmy Savile. Two years after Savile died in October 2011, U.K. police investigations uncovered that he had been guilty of hundreds of criminal sex-abuse offenses, targeting mostly children. That revelation has had a lasting impact on Theroux—who had formed a “quasi-friendship” with Savile after filming together-—and was partially the impetus for writing the memoir.

The lighthearted nature of Theroux’s questioning of Savile led to retrospective criticism of his interview style, best described as “faux naive.” In an early segment on TV Nation, for example, Theroux interviewed neo-Nazis in Montana and earnestly discussed their theories of different races being banished to different planets after an impending apocalypse. Is it all an act? He says that is in the top three questions he is ever asked. “Am I exactly the same person on camera as off camera? Well, evidently no because I’m doing a job on camera, and part of that is asking questions to which I know the answer sometimes.” That statement circles back to his immersive approach, talking to subjects in the languages of their own worlds. “Maybe it’s my sense of humor to ask something really obvious … I don’t know if that’s a helpful answer or not, but basically I think me saying stupid things sometimes is funny. I plead guilty to that.”

Still, his approach risks seeming like he is letting his subjects off the hook—something survivors of Savile’s abuse charged him with when he met with them for a follow-up documentary in 2016. At one point, Theroux is called “gullible and silly,” and confronted with accusations of failing to recognize evil in plain sight. “I needed to hear that, actually,” he says now.

Some of the “weird” ideas Theroux helped introduce to viewing audiences have since become more widely accepted. In a 1998 edition of Weird Weekends, for example, he traveled to Idaho to meet survivalists preparing for the apocalypse. Theroux says the story hasn’t really changed. “Most of those guys or guys like them are still doing similar sorts of things, with the slight difference that sometimes they’re being retweeted by Donald Trump Jr. or President Trump himself,” he says. “In other words, the fever swamps of conspiracy have a hold over mainstream discourse now.”

Theroux’s early films—which have won a new generation of fans after being added to Netflix—-frequently involved partial integration into the world he was in: stripping for a Polaroid photo on an L.A. pornography shoot, or getting liposuction at a Beverly Hills clinic. While these kinds of stunts were what he calls “the price of admission” for making programs that would keep people entertained, today he keeps the antics to a minimum. Instead, in recent years Theroux has turned his attention to more serious matters. Recent films include 2016’s Drinking to Oblivion, an unsparing look at alcohol addiction, and this year’s Mothers on the Edge, in which he met sufferers of post-partum depression. He made his first feature-length documentary, My Scientology Movie, in 2016—once again shedding light on an outlier community. The linking factor, he says, is human beings themselves. “What all the films entail is a certain level of psychological angst, or complexity, or contradictoriness. I want to go deeper into why people behave the way that they do.”

As we stand up to leave, a woman approaches, seemingly keen to take a selfie with Theroux. Instead she hands him her phone and asks him to take a photo of her, standing in front of the park’s colorful flower beds. Theroux smiles politely and fulfills her request, at ease again behind the camera. 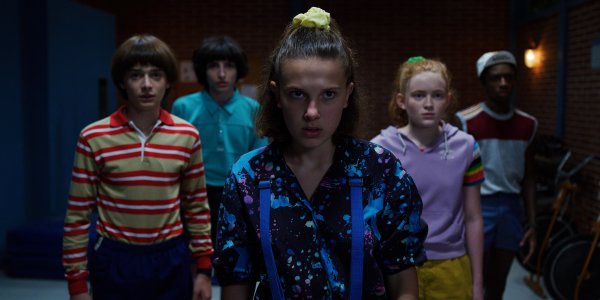 We Just Got a Look at Who's Coming Back for Stranger Things Season 4. Here's Everything We Know About Your Favorite Netflix Binge.
Next Up: Editor's Pick