It finally feels like fall in the Northeast, but in the alternate-universe Westchester County of Netflix’s Big Mouth, spring is in the air. And for the tween characters whose growing pains are the subject of this beloved adult cartoon, which returned for a third season on Friday, that means emotions—and hormones—are running high. Budding feminist Jessi (Jessi Klein) finds outrage fuel everywhere she looks. After humiliating himself in a desperate attempt to win back his ex-girlfriend Missy (Jenny Slate), in February’s Valentine’s Day special, dweeby Andrew (John Mulaney) remains a pariah at Bridgeton Middle. Jay (Jason Mantzoukas), a voracious horndog who’s starting to realize he’s bisexual, can’t stop staring at so much newly exposed flesh.

Within the first few minutes of the season 3 premiere, Jay’s chaotic libido causes a shop-class crisis: distracted by two attractive classmates in tank tops (who he pictures as juicy cooked turkeys), he saws off the tip of Andrew’s finger. Especially if you’re not familiar with the show, this probably doesn’t sound like the setup for one of the year’s best TV episodes. Yet there’s no better example of the genius of Big Mouth—a comedy that nails the sophomoric physical humor of preadolescence but whose hilarious portrait of puberty is really a mirror held up to adult sexuality—more than what follows. In the space of a half hour, writers Hayley Adams, Joellen Redlingshafer and Kelsey Cressman demonstrate in remarkably nuanced detail how cultural ideas about women’s sexuality can make people of all genders miserable. And they keep you laughing the whole time.

When it comes out that Jay was salivating over shoulders when the accident happened, Bridgeton’s Dean of Students decides that instead of punishing the boy, he’s going to instate a dress code. “The male students can’t control themselves. They’re animals. That’s not their fault,” the performatively woke administrator explains at an assembly on “toxic masculinity.” A ban on revealing clothing for female students, he says, will “protect our strong, empowered women from the white-hot male gaze.” What’s absurd isn’t just that Jay was actually ogling a girl and a boy when he hurt Andrew; it’s that the dean simultaneously calls female students “empowered,” frames them as victims and punishes them for a boy’s actions. To further compound the ironies, the girls keep raising good questions (“Why don’t you just teach the boys some impulse control?”) and getting ignored.

If you’ve watched much TV in the past decade, you can probably see the writers winding up to a statement against slut-shaming; in this case, it comes complete with the Bridgeton girls’ very own musical “Amber Rose SlutWalk” protest. But where many other shows would be satisfied with that tidy moral, Big Mouth keeps zooming out to examine how the adults’ mixed messages about female sexuality—and the kids’ own miscommunications—affect each of the characters. Jessi reluctantly dons a crop top, but feels uncomfortable in her own skin. Missy battles her self-hating alter ego, “Mirror Missy,” and ultimately comes to the protest in the same gender-neutral clothing she always wears, only to be branded a traitor by the other girls.

The boys are even more confused by the protest. Why would the girls dress in their skimpiest clothes, they wonder, if they didn’t want male attention? And what are they actually supposed to do about sexual urges they’ve been taught are impossible to control? Insecure, under-developed Nick (co-creator Nick Kroll) knows sexism when he sees it, but, as he explains to his family, “I don’t want to be the guy who calls other guys misogynists.” When he finally musters the courage to be a “good ally,” the wrong words come out of his mouth, and he offends the girls anyway. Already smarting from Missy’s very public rejection, Andrew turns mean. In a subplot that skis the slippery slope of white male anger, he airs his grievances—”It’s just hard to be a boy these days!”—on the internet and ends up at a “men’s rights” meeting that soon devolves into a veritable neo-Nazi rally.

There is traditionally a lot of hugging and learning in shows set at middle school, which are mostly aimed at even younger kids. Yet this episode, titled “Girls Are Angry Too,” leans into messiness. An argument that pits well-meaning but clueless Nick against an increasingly irate Jessi acknowledges that, because we can’t physically inhabit each other’s bodies, communication between men and women will always be fraught. “You don’t know what it’s like being a girl!” she cries, before reaching the sudden epiphany that the only way of bridging the gender divide “might just be this long conversation that we have to keep having!” “It’s not that bad!” Nick yells back. If only more adults could have such productive fights.

Despite the animation, the masturbation jokes and the presence of furry “hormone monsters” who guide the characters through puberty, something like maturity grounds the show’s best episodes. Kroll and his co-creators, Andrew Goldberg, Mark Levin and Jennifer Flackett, understand that preadolescence is more than just a series of awkwardly funny rites of passage; they set the tone for our lifelong relationships with gender, sexuality, ourselves and other people. (In a telling scene from “Girls Are Angry Too,” a parents’ meeting about the dress code quickly devolves into a screaming match.) In revisiting middle school, Big Mouth sorts through some of the heaviest cultural baggage we all acquire during those years without even realizing it. 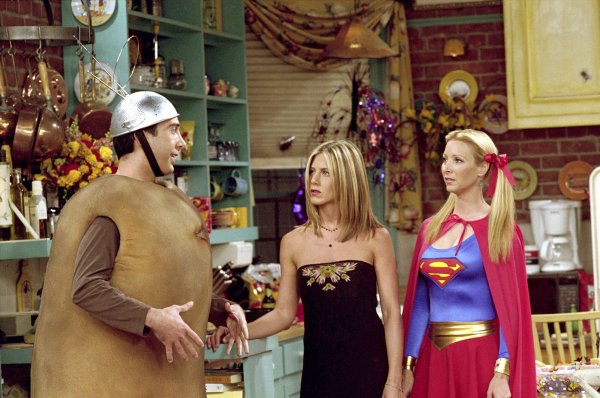 The 20 Best Halloween TV Episodes of All Time
Next Up: Editor's Pick