Jennifer Lawrence and director David O. Russell don’t need a third time for the charm to kick in — they were showered with accolades for their work together on American Hustle and Silver Linings Playbook — but they may be already cooking up another project together anyway. Deadline reports that Russell has started planning his next film, and (unsurprisingly) he wants Lawrence to play the lead.

Given their track record? It’s all but destined to be a doozy come Oscar season.

The movie doesn’t yet have a title — but it does have a script by Bridesmaids co-writer Annie Mumolo — and reportedly, it’s a “rags to riches” biopic of Joy Mangano.

As detailed in a 2001 New York Times profile of the Long Island entrepreneur, her story began in 1989 when Mangano, a divorced mother of three, found herself frustrated by pretty much every aspect of mopping floors. So, over the course of the next few years, she developed a product — the Miracle Mop — that would last longer and be easier to wring out. She convinced QVC executives to let her pitch it herself in a TV appearance that led to 18,000 mops selling in just 20 minutes, and ten years later, she sold her growing company to the parent company of Home Shopping Network. By 2006, ABC reported that she was living in a 14-bedroom mansion.

And, bonus for Jennifer Lawrence, there’s plenty of Joy Mangano footage out there so she can work on the performance. She’s bound to nail the line about how she can’t live without her little steamer… 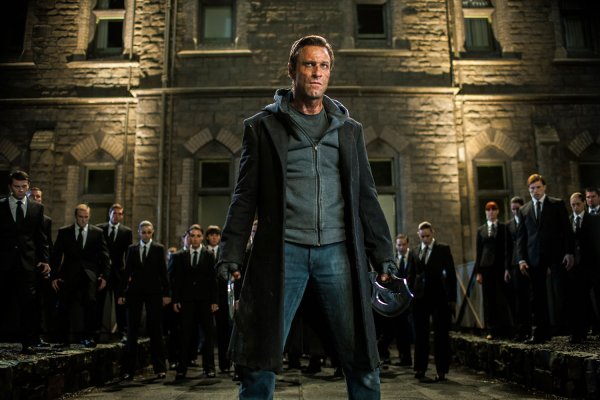 'I, Frankenstein': NOT the Worst Movie Ever
Next Up: Editor's Pick