When Lin-Manuel Miranda was in rehearsals for his breakout theatrical production In the Heights, he—along with his cast and crew—would break up the grueling schedule by sneaking off and improvising, spitting bits of rhymes and jokes. “We did it as a fun way to blow off steam,” Miranda says. His colleague Anthony Veneziale, who had an extensive improv background, suggested they perform it in front of people.

So they did, in a show they called Freestyle Love Supreme, borrowing its name from John Coltrane’s 1965 album A Love Supreme, and billed as a hip-hop improv show. Miranda and his cohorts first performed it in the cramped basement of the temporarily closed theater-district location of New York City staple Drama Book Shop in 2003, basing the show on audience suggestions and making up the rest on the spot. Starting Oct. 2, the show will make its official Broadway debut at the Booth Theatre. “This was not a show that would, in our wildest dreams, play Broadway,” says Miranda. “I could show you footage of us with flyers, busking and making up raps and begging people to come to the show. We’ve come very far—and at the same time, it’s also been five blocks.”

That the show is on Broadway at all is a testament to the power of Miranda’s brand. Following the success of In the Heights, the writer-director-performer won universal acclaim for his show Hamilton, which has led to an eclectic career: he’s behind an upcoming remake of The Little Mermaid, a big-screen take on In the Heights and a movie version of Jonathan Larson’s play Tick, Tick … Boom!, which he’ll direct—plus he’ll star in an adaptation of the fantasy novel series His Dark Materials, which premieres on Nov. 4 on HBO. Yet the joys of Freestyle Love Supreme continued to ricochet around his creative psyche. “It never went away,” he says. “It was always this supporting exercise that made all other things possible.”

Dusting off the show for Broadway was a way for Miranda to honor his creative past while helping push into the future. Improv is an art form mainly relegated to tiny stages, rarely performed at this scale. “We tried to do research into improv on Broadway,” says Veneziale, “and only came up with one or two things that fall vaguely into the realm of it. It feels pretty singular.” Director Thomas Kail, a longtime Miranda collaborator who also directed Hamilton and In the Heights, worked to give the show some basic structure while still allowing it to stay loose. “There’s a liberation in doing something like this,” he says. “Unlike anything we’ve ever done, it takes this strange skill set we have and celebrates it.”

The 16-week Broadway run features a rotating group of freestylers—among them Miranda and Veneziale as well as Chris Sullivan, a beatboxer known as Shockwave and longtime member Utkarsh Ambudkar. Though Miranda’s calendar is jam-packed, it’s a priority for him to work in this way, without the restraints of scripted projects. “We do it for the joy of doing it,” he says, “and for the freedom that comes with getting onstage without a plan and connecting with an audience in the most visceral way possible: ‘Tell us what’s on your mind, and we’re going to make a show for you.’”

Though that may sound intimidating—standing in front of that many people onstage without a plan—Veneziale says it gets more natural after decades of practice. “It comes from a subliminal part of your subconscious, so you’re able to trust your abilities,” he says. “When you freestyle enough, you start dreaming in freestyle.” Miranda agrees, noting that the ability to improvise rhymed verses now comes as organically to him as speaking another language. “A lot of my life is pretty scheduled,” he says. “I’m juggling two kids, a marriage and a lot of projects. When I get to do a freestyle show, I don’t think of any of that.” 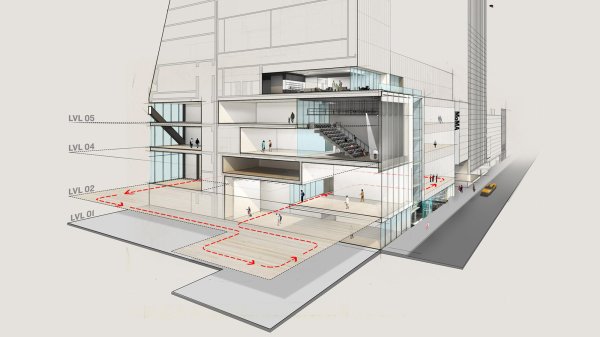 The MoMA Will Soon Reopen Following Extensive Renovations. Here's What to Expect From the Revamped Museum
Next Up: Editor's Pick