What Happens Next With Trump, Ukraine and Impeachment

U.S. President Donald Trump and Ukrainian President Volodymyr Zelensky meet in New York on September 25, 2019, on the sidelines of the United Nations General Assembly.
Saul Loeb—AFP/Getty Images
Ideas
By Ian Bremmer
Bremmer is a foreign affairs columnist and editor-at-large at TIME. He is the president of Eurasia Group, a political-risk consultancy, and GZERO Media, a company dedicated to providing intelligent and engaging coverage of international affairs. He teaches applied geopolitics at Columbia University’s School of International and Public Affairs and his most recent book is Us vs. Them: The Failure of Globalism.

For two and a half years, Donald Trump has pursued an unorthodox “my nation first/my interests first” approach to governing the US with relatively minimal political blowback. But with formal impeachment inquiries launched against him this week, he now enters the most dangerous phase of his political career.

Because the US is about to face its greatest test yet of how well its system of governance can work in a time of hyper-polarized politics, something it has struggled with for the better part of three years now.

Before diving into what’s next, it’s important to lay out the basic points that brought us to this moment. While Joe Biden was still vice president, his son Hunter had a lucrative contract with a Ukrainian natural gas firm called Burisma that paid him as much as $50,000 a month. Given that amount of money, it’s a good bet that the Ukrainians hoped to be buying influence and access (though there is no evidence that they succeeded in doing so). At the same time that Hunter was on their payroll, Joe Biden—in line with a broader constellation of actors that included the EU, the IMF and World Bank—called for Ukraine’s prosecutor general to be fired because he was not doing enough to weed out corruption in the country. That prosecutor general was eventually fired.

Fast forward a few years. It’s the summer of 2019, and Trump is now sitting in the Oval Office. The Mueller investigation has fizzled, and Trump has now turned his sights to his upcoming reelection campaign. Ahead of a phone call with Ukraine’s new president Volodymyr Zelensky (a comedian who rode an anti-establishment, anti-corruption wave to power), Trump decides to freeze a $391 million disbursement of military aid earmarked by US congress that was intended for Ukraine. In his call with Zelensky, Trump asked his Ukrainian counterpart to do him a favor and work with his Attorney General William Barr and his personal lawyer Rudy Giuliani to investigate the Bidens’ dealings with Ukraine, a request that, according to the Wall Street Journal, he repeated eight times in the phone call. A member of the intelligence community was so alarmed by the requests that they filed a whistleblower complaint to the inspector general, which concluded it was a matter of “urgent concern.” But the acting Director of National Intelligence didn’t share that complaint with Congress as per federal whistleblower law (citing issues with executive privilege, the subject of today’s congressional hearings), triggering the current outcry. Trump has since disbursed the military aid marked for Ukraine, but the perception that he used the power of his office to try to force a foreign leader into hurting a political rival caused enough House Democrats to reassess their previous skepticism of impeachment and launch an official inquiry, which officially kicked off this week.

Political drama of the highest order. For Democrats that are pushing for impeachment articles to be drafted against Trump, there are two primary areas of concern from this latest round of revelations. The first is whether Trump used U.S. taxpayer money (in the form of military aid to Ukraine) to strong arm a foreign country into investigating his political opponent and boost his own chances of reelection. The second is whether and how the whistleblower’s complaint was stopped from reaching members of Congress, potentially reviving those obstruction of justice complaints that featured so prominently during the Mueller saga. For now, the triggering of formal impeachment inquiries is more about the optics than changing the nature of the work that Democratic-controlled committees were already doing in investigating the sitting U.S. president, though it does provide them with more resources to pursue those investigations.

It’s not yet clear that the impeachment proceedings will move forward beyond the inquiry stages. Absent enough public support, it becomes difficult for centrist Democrats in key swing districts to continue supporting the impeachment push. Democrats have the numbers to likely pass impeachment articles in the House (a slow-moving process which will likely take until the end of 2019 at earliest) with a simple majority, but Senate Republicans’ continuing support for Trump—driven by his overwhelming popularity with the GOP base—makes the actual removal of Trump from office a near impossibility, particularly as it requires a two-thirds majority in that chamber.

Trump can count on impeachment hearings galvanizing his political base, but that will be offset against both his legislative agenda and reelection campaign coming under the long shadow of the word “impeachment.” The impeachment cloud will also make it harder for a politically imperiled Trump to drive a harder bargain with the Chinese in the coming months. So too with the Iranians. And the North Koreans. And the Afghans. And the Europeans. And… you get the idea.

That this is all unequivocally bad news for Trump. Trump has built an impressive political career out of repeating accusations long and loud enough that eventually (assisted by the mainstream media that repeats them ad infinitum) it becomes conventional wisdom. Yes, Biden did call for Ukraine’s special prosecutor to be fired (and then bragged about it), but for his failure to investigate corruption seriously enough. Not that the level of nuance matters for Trump; there’s enough smoke there that simply repeating the words “Biden” “fired prosecutor” and “corruption” could be enough to displace the Democratic frontrunner that was already faltering in polls, which is good news for Trump since the centrist Biden posed the most formidable challenge to him in a general election. That’s especially true if Democrats decide that there’s just too much shadiness around Biden and his son and decide to jettison him a la Al Franken to avoid any appearance of impropriety. It could happen.

81 percent of Americans believe that members of Congress act unethically all or most/some of the time. In other words, impeachment is not just about Congress convincing the American public that the president acted unethically, but also that they themselves are acting in good faith by using constitutional procedures to remove a political rival. It’s an uphill battle.

Once the word “impeachment” gets thrown out in public, everything gets filtered through that lens. Read this piece about Hunter Biden and Ukraine from the New Yorker published a couple months ago for a tad less spin.

Democrats should be thankful Mueller wasn’t better at selling the case for impeachment to the U.S. public. If he was, Trump probably wouldn’t have felt as emboldened as he did to lean on Ukraine in such an unprecedented manner. Sometimes, it pays to lose the battle for a chance to win the war.

If all this ends up with Bernie Sanders being the Democratic nominee and Trump surviving impeachment, Trump is the greatest political strategist the world has seen since Machiavelli. 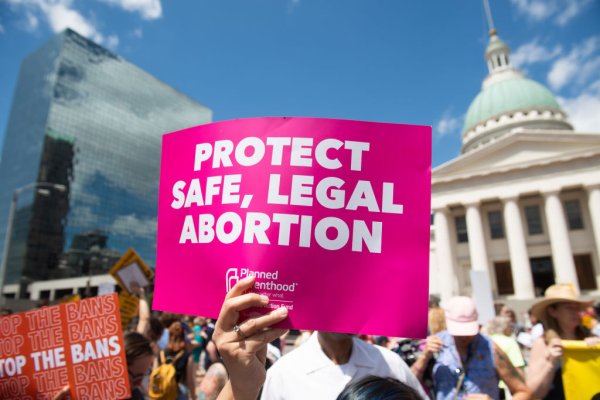 Abortion Bans Strip People of Their Human Rights. Here's Why We Must Stand In Solidarity Against Them
Next Up: Editor's Pick