After four months of unprecedented violent demonstrations in Hong Kong and no end in sight, the city’s beleaguered leader has one more thing to worry about: the suspect in the murder case that led to the social unrest could soon walk free.

When Chief Executive Carrie Lam proposed amending the extradition law in February, she cited the case of Chan Tong-kai, wanted in Taiwan in connection with the February 2018 slaying of his girlfriend, Poon Hui-wing. Chan was sentenced by a Hong Kong court in April to 29 months for money-laundering after he used Poon’s bank card for ATM withdrawals, but no legal framework exists for him to be returned to Taiwan to face the murder charges.

While Lam was forced to eventually say she would withdraw the extradition bill, it wasn’t enough to appease the protesters who’ve since broadened their demands to include an independent inquiry into police conduct and a more democratic form of governance. Meanwhile, Chan could be released as early as October on good behavior, Hong Kong’s security head John Lee said in April. Emails sent to Lee and his department this week went unanswered.

“This administration has all the reasons to bring Chan to justice — not only was his alleged conduct serious and lethal, but also it was this administration who presented the victim’s mourning family as a moral motive to push the now-withdrawn extradition bill,” Alvin Yeung, a barrister and pro-democracy lawmaker in Hong Kong, said this week. “Now the chief executive has abandoned the murder case and the victim’s family.”

Emails to Ronnie Leung, a lawyer who represented Chan in Hong Kong, and to the Secretary for Justice’s Office went unanswered.

Chan and Poon, both Hong Kong residents, went to Taiwan on vacation in February 2018, the South China Morning Post reported. When Poon failed to return, her parents filed a missing persons report and her father traveled to Taiwan to find her, it said. Poon’s decomposed body was found by Taiwan police on March 13, the day Chan was arrested, according to the Post.

Hong Kong police said that Chan confessed under caution to killing his pregnant girlfriend in Taiwan, the Morning Post said. Chan said that after an argument he strangled Poon and stuffed the body in a suitcase, which he later disposed of in a park, according to the report, citing evidence at his trial. He was remanded in custody for 13 months, it said. Reports gave their ages at around 19 and 20.

“I suppose he will be a free man but I doubt he can stay in Hong Kong with such attention on his every move,” said Bernard Chan, a top adviser to Lam and convener of the executive council.

Taiwan officials made requests to Hong Kong for judicial assistance in March and April 2018, and in December asked that the suspect be sent to Taiwan for investigations, Chiu Chih-hung, deputy chief prosecutor in Shilin district, said in a phone interview on Sept. 23. They received no reply, he said.

Still, the government in Taiwan made it clear that it would not agree to the extradition bill, which it said could infringe on its sovereignty. President Tsai Ing-wen in June said she rejected Hong Kong’s use of individual extradition “as an excuse to make legal amendments.”

“We cannot work together to crack down on crime using laws that infringe on human rights as a precondition,” she said. “We will not be an accessory to the passage of this unconscionable law.”

Lam’s proposed law sparked protests because it would have permitted the extradition of criminal suspects to mainland China, opening the possibility that Hong Kong residents could become subject to its laws. In the 1984 joint declaration, Britain and China agreed among other things that the city would follow English common law under a “one country, two systems” arrangement for 50 years.

In Taiwan, sympathizers of Hong Kong’s protests have held their own rallies since June, ranging from small gatherings to several thousands of demonstrators surrounding the legislature. Others have rallied to the cause by donating tear gas masks and helmets to be shipped to the Hong Kong activists, according to the Taipei Times.

Poon’s family has lobbied the government to return Chan to Taiwan to face justice. Her mother appeared in February in front of the press in a baseball hat, mask and sunglasses and urged the administration to take action. While the parents initially backed the plan for an extradition bill, after the protests erupted her father asked Lam in a letter on June 26 to consider a one-off arrangement or other measures, instead of a introducing a new law, HK01 reported.

Both Lam’s office and Poon’s family declined to comment on the report, HK01 said.

The Hong Kong Law Society said in an 11-page submission in June that the government should consult all stakeholders and the community before rushing into legislation regarding extraditions to China, Taiwan and Macau, which was proposed in the bill.

“The circumstances which have now purportedly given rise to this sudden need for legislation are not persuasive, notwithstanding the repeated reliance by the government on a murder case in Taiwan,” the society said in the submission.

“What is happening now politically and on the streets does not necessarily prohibit the administration from pursuing other legislative proposals” to bring Chan to justice, he said.

The government’s initial reluctance to withdraw the bill allowed protests to develop beyond the original demand and increase in intensity. Almost every week for about four months police have fired tear gas, pepper spray and non-lethal firearms to disperse demonstrations. There have been almost 1,500 arrests, and extensive damage to train stations and government buildings since the civil unrest began.

“The entire unrest is caused by the government’s work in amending the extradition law,” Lam told a town-hall style meeting in Hong Kong on Thursday.

When Lam suspended the bill on June 15, she said she told the Poon family the government has “done their best” to deal with the murder case, drawing an angry response from protesters.

“The case has only been an excuse to introduce the extradition bill,” said Ventus Lau, a 25-year-old protester and organizer for the rallies.

“From our perspective, our priority is not this case,” he said. “I don’t believe the movement will come to a halt if the Chan Tong-kai case has been dealt with.” 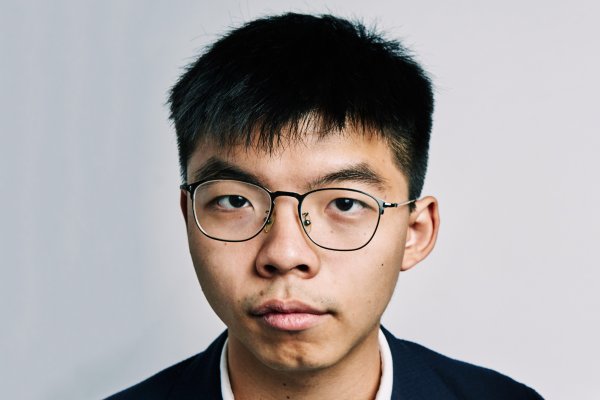 Joshua Wong on the Umbrella Revolution's 5th Anniversary
Next Up: Editor's Pick