The best-selling author on totally rewriting her new book, being mad at her neighbors and the inaccuracy of memories

Your new novel, The Dutch House, is about families who circle in and out of a grand house in Pennsylvania. Did you have a particular house in mind?

No. It was important to me to only have a few details because I believe that everybody has one, if not several houses, that they are completely in love with that they’ve either been in or been past. The book was going to be called Maeve, and because I own a bookstore, I really did understand that The Dutch House was a much better title. The words Dutch and house have the same number of letters; I knew it would look really good. To me, the house is just symbolic of the life. It’s a book about wealth and poverty, and the sort of whiplash of going back and forth between those two states.

The book is about Maeve, but from the point of view of her brother. Did you have any trepidation about writing as a young man?

Danny was a very easy character for me to write because, oddly enough, I have known many men who are smart and charming and funny and interesting, who have no understanding of the fact that their whole life is built on the shoulders of the women who carry them around.

Andrea is the only character whose bad behavior you don’t explain. Why?

The greatest lack I think in my body of work, if, God forbid, you were to read it all, is that I don’t write villains. I have this shortcoming that whenever I get too close to anybody, I become sympathetic to them. And I just really wanted a villain. That was why I wrote this book in first person, because all Danny knows is what Andrea chooses to show him.

This book is also about good people who are not very good mothers. From the point of view of somebody without kids, do you feel that mothers are judged overly harshly?

I wrote this book, got all the way to the end, read it, hated it, threw it away and started over. And I mean completely. What I realized in having it bomb so completely is that you cannot write a sympathetic character who leaves her children for ethical reasons. There is definitely a different standard for men and women, and I wanted to take that on. And I realized that I couldn’t. We sing songs about Odysseus, and we pray to the Buddha [both of whom left home], and nobody thinks about their sons. I sat down on the carpet in the middle of my office. I imagined every mother on my street who has young children, and her leaving her children to go and do important work for the poor. And I was angry at all of them.

You write, “By 1968, pretty much every representation of hope in the country had been put up against a wall and shot.” Is that true now?

People are trying to hold up their light, and God love them. But it’s a very, very tough time, and this book definitely came out of the presidential election, and the celebration of wealth, the idea that nothing could be better than being rich.

You looked after your grandmother in her declining years. Did you identify with Elna during those scenes?

It was really hard work. It was heartbreaking and just so time- and labor-intensive, and people were always saying to me, “Oh, you’re so lucky.” And I would think, “Oh, f-ck you.” And yet, here I am, I’m 55, she died when I was 41, and I am sitting in my office looking straight at a picture of her. I miss her, I miss taking care of her. I miss her little body, vacant of her mind, and I would say to someone who was taking care of their grandmother, “You’re so lucky, enjoy every minute of it.”

Do you think it’s possible to ever see the past as it actually was? 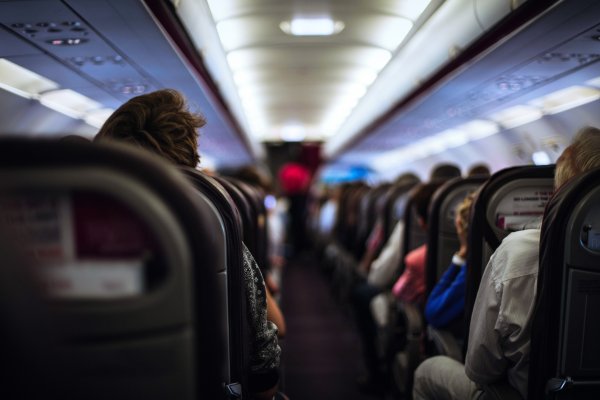 Planes Weren’t Built for Big People Like Me. Here’s What I Want My Seatmates to Know
Next Up: Editor's Pick