The U.S. is imposing penalties on a handful of Chinese shipping firms for continuing to carry Iranian oil after sanctions waivers lapsed in May.

China Concord Petroleum Co., Kunlun Shipping Co., Pegasus 88 Ltd., and COSCO Shipping Tanker (Dalian) Seaman & Ship Management Co. have been charged with knowingly violating restrictions on handling and transacting Iranian petroleum. Additional restrictions were also imposed on five executives at the companies, as well as Kunlun Holding Co. and COSCO Shipping Tanker (Dalian) Co., which own or control one or more of the sanctioned entities.

The sanctions bar U.S. citizens and companies from dealing with the shipping companies, effectively blocking them from American banks at the heart of the global financial system. They also block any property or interests the firms or people have in the U.S. and forbid any American assets from being paid or transferred to them.

China, the world’s largest crude buyer, continues to import relatively small amounts of oil and petroleum products from the Persian Gulf nation in the face of the White House’s sanctions on the OPEC producer. It took 788,000 tons of crude from Iran in August, compared with a monthly average of 2.4 million tons last year, Chinese customs data show. The sanctions could complicate talks to end the U.S.-China trade war, which resume in Washington next month.

The penalties don’t apply to COSCO’s ultimate parent, COSCO Shipping Corp., or any of its other subsidiaries or affiliates, the Treasury Department said in a statement on its website.

COSCO Shipping Energy, the parent of COSCO Shipping Tanker (Dalian), halted trading in Hong Kong on Thursday after the announcement.

“This is one of the largest sanctions actions the United States has taken against entities and individuals identified as transporting Iranian oil since our sanctions were re-imposed in November 2018,” Secretary of State Michael Pompeo said in the statement.

The move is aimed at denying the Iranian regime critical income to engage in foreign conflicts, advance its ballistic missile development, and fund terrorism around the world, Pompeo said. These sanctions are over the transport of Iranian crude oil, and the U.S. is similarly concerned about the export of Iranian refined petroleum products, he said.

This isn’t the first time Kunlun Holding and Kunlun Shipping have been involved with Iran-related transactions. Last month, the companies were linked to several seized tankers in Singapore, after a bank sought to take over the vessels due to suspicion that their owners appeared to breach U.S. sanctions, leading to a loan default.

In July, the U.S. sanctioned Chinese state oil trader Zhuhai Zhenrong Co., a secretive company with links to the Chinese military. The company has a history of taking Iranian crude and fuel, at times as part of barter deals for goods or services, and then selling it on to refiners in China. 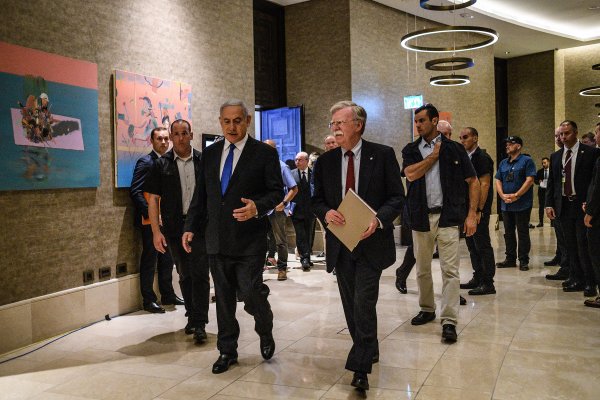 Breaking Point: How Trump and Bolton Finally Hit Their Limit
Next Up: Editor's Pick