Should You Stop Eating Red Meat? A New Paper Has a Controversial Answer

Nutrition research is consistently conflicting. Everything from a study’s design to the way its data is analyzed can affect the outcome of a particular experiment—hence the frustrating and common phenomenon where something considered healthy today is condemned tomorrow.

But new nutrition recommendations published in the Annals of Internal Medicine are causing even more of a stir than usual. The guidelines say individuals do not need to eat less red and processed meat to stay healthy, despite prior studies that have linked these foods to conditions such as heart disease and cancer, and years of scientific support for a largely plant-based diet.

“For the majority of people, but not everyone, continuing their red and processed meat consumption is the right approach,” says first author Bradley Johnston, an associate professor of community health and epidemiology at Canada’s Dalhousie University. That’s three to four servings per week for most North Americans, Johnston says.

Not everyone in the nutrition community agrees with that assessment. “Their recommendations are really irresponsible,” says Dr. Frank Hu, chair of the nutrition department at the Harvard T.H. Chan School of Public Health and co-author of a recent BMJ study that linked eating red and processed meat to higher mortality risk. Ahead of the new paper’s publication, Hu and his colleagues completed their own analysis of data from studies used to form the new recommendations, and “calculated that a modest reduction in red meat consumption could hypothetically reduce mortality by 7.6% [at the U.S. population level], or approximately 200,000 deaths a year,” he says. “That’s a huge estimate.”

Red meat is a staple of the American diet: By U.S. Department of Agriculture estimates, the average American adult ate 222 pounds of red meat and poultry in 2018. Data from the National Health and Nutrition Examination Survey suggest about 60% of meat eaten in the U.S. is red, with processed meats like bacon and sausage accounting for about a quarter of total meat consumption, according to a separate study published in June.

The new recommendations break with that conventional wisdom. They were compiled by a panel of 14 people—three of whom voted against the final recommendation—representing fields including research methodology, nutritional epidemiology, dietetics, family medicine and internal medicine. Conclusions were based on five different reviews of prior research on red and processed meat consumption, touching on both health outcomes and cultural preferences. To assess those studies, the team used a research approach that rates the certainty of existing evidence, giving more weight to things like randomized controlled trials—in which one study group carries out a certain behavior, while another acts as a control group—and less weight to observational studies, which use patterns in a dataset to find associations between a behavior and an outcome.

The panel also focused on the “absolute risk” associated with eating meat, rather than changes in “relative risk,” which Johnston says can sometimes distort the magnitude of an effect. “If the baseline risk in the population of an illness is 2% and after a study it’s shown to reduce to 1%, that’s a 50% relative risk reduction, but it’s actually only a 1% absolute risk reduction,” he explains.

Using that framework, the group found “only low-certainty evidence of a very small reduction in cancer or other adverse health consequences from reducing meat consumption [by three servings per week,]” Johnston says. “For most people who enjoy eating meat, the uncertain health benefits of cutting down are unlikely to be worth it.” (The authors did not consider non-health-related reasons for cutting back on meat, such as ethical or environmental concerns.)

But Hu says the panel’s methodology is most appropriate for drug research, which relies heavily on randomized controlled trials. By contrast, most nutrition research is observational, since it’s difficult logistically and ethically to ask people to change their eating habits to the extent and length necessary for a randomized controlled trial. In this case, that distinction “led the authors to dismiss massive amounts of data from large cohort studies,” Hu says.

Dr. John Sievenpiper, an associate professor of nutrition sciences at the University of Toronto, voiced his own concerns in commentary posted on Harvard’s website. “Unfortunately,” he said, “the leadership of the paper chose to play up the low certainty of evidence by [the assessment methodology] as opposed to the protective associations that directly support current recommendations to lower meat intake.” Sievenpiper also added that the study did not assess things like substituting animal protein for plant protein, which is generally thought to be a healthy swap. That’s potentially important, since replacing red meat with an equivalent plant protein, like beans or nuts, would likely have a different effect than replacing those calories with refined carbohydrates or other processed foods.

The American Institute for Cancer Research also disputed the panel’s findings in a statement. “Regularly eating processed meat, and higher consumption of red meat, increases your risk of colorectal cancer; suggesting that there is no need to limit these foods would put people at risk of colorectal cancer and further undermine public confidence in dietary advice,” Dr. Nigel Brockton, the group’s vice president of research, said in the statement.

Still, Johnston stands by his findings. “If [guidelines are] based on observational studies, it’s hard to make strong causal inferences on red meat or processed meat, given other possibly confounding factors” such as a person’s socioeconomic class, lifestyle and other dietary habits, Johnston says. “There is some evidence of an association between red meat and important outcomes and processed meat and important health outcomes—but there’s a lot of uncertainty.” 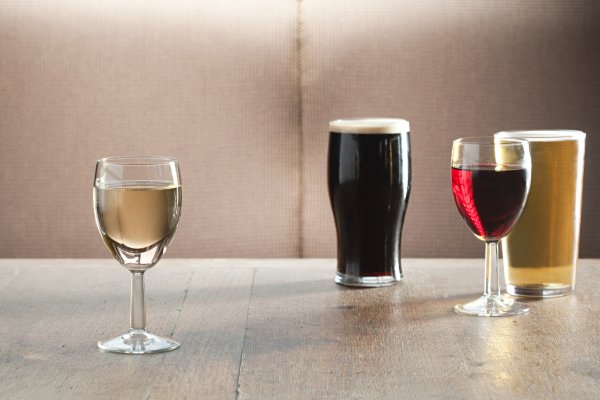 Is Wine Really Healthier Than Beer?
Next Up: Editor's Pick