The World's Oceans Are in Trouble. And So Are Humans, Warns U.N. Report

A view of major bleaching on the coral reefs of the Society Islands on May 9, 2019 in Moorea, French Polynesia.
Alexis Rosenfeld—Getty Images
By Justin Worland

To most people, the world’s oceans can seem dark and distant. Billions live in close proximity to them and rarely venture in; billions more live with the world’s bodies of water out of sight and out of mind.

But as humans continue to pump global-warming causing gases into the air, oceans are playing a role shaping all of human civilization, according to a new report from the United Nations’ climate science body.

“The world’s ocean and cryosphere have been taking the heat for climate change for decades,” says Ko Barrett, a vice chair of the IPCC. “The consequences for nature and humanity are sweeping and severe.”

Changes to oceans caused by man-made global warming have worsened the impact of hurricanes, shifted the food supply and contributed to rising sea levels. Significant no matter where you live on the planet, oceans have absorbed heat in recent decades that would otherwise have led to warmer — and unsustainable — land temperatures, but the report warns that the oceans will soon no longer be able to play that role.

Since the 1980s, oceans have absorbed as much as 30% of global carbon dioxide emissions and an even larger share of the excess heat, according to the report. The rate of ocean warming has doubled in the last quarter century since the rate in 1970 as humans as have rapidly grown their carbon emissions. “For decades the ocean has been acting like a sponge,” says Barrett. “But it can’t keep up.”

The ocean’s role absorbing carbon and heat is a good news for humans concerned about the warming — at least in the short term — but it’s bad news for the underwater ecosystems disrupted by the change in the resulting change in acidity. Warmer temperatures lead to a spike in marine heat waves, which disrupt life much like a terrestrial heat wave. Meanwhile, higher carbon levels lead to ocean acidification and in turn contribute to a slew of effects, including the destruction of coral reefs.

As with most of effects of climate change, the challenges of the changing ocean will not be distributed equally. Coastal communities will face sea levels that rise increasingly quickly. Event with urgent action to stem emissions sea levels may rise by almost half a meter on average by the end of the century; if climate change is left unaddressed sea levels could rise by almost a meter, especially if Antarctic ice sheets collapse. “Sea level rise has accelerated and will accelerate further,” says Regine Hock, a study author and a professor at the University of Alaska, Fairbanks.

The report also addresses the effects of climate change on what’s known as the cryosphere, or frozen water. Changes to ice coverage in the Arctic are “likely unprecedented for at least 1,000 years,” according to the report. Ice coverage is decreasing every month of the year, and coverage at the lowest point, in September, has declined around 13% per decade since 1979.

The report is the latest in a string of influential reports from the IPCC. Last October, the organization released a landmark report warning of the dramatic consequences of 1.5°C of global warming, from the loss of the world’s coral reefs to the displacement of millions of people. And in July the IPCC released a report showing how climate change is reshaping land.

The recent reports come as world leaders continue to struggle to commit to a bold global agenda. The latest report comes just days after a Sept. 23 U.N. summit that brought together heads of state. More than 70 countries committed to net-zero emissions, but the summit fell short of expectations.

The ocean report is a reminder of the powerful role these bodies of water play shaping our lives. For centuries, humans viewed the oceans with skepticism, relying on it to trade but appreciating its dangers. The world’s first port major cities — from London to Guangzhou, Amsterdam to Dhaka — were built on inland rivers rather than on the coast.

“It is as if, before the early modern era, there had existed a general acceptance that provision had to be made for the unpredictable furies of the ocean,” writes Amitav Ghosh in his acclaimed book The Great Derangement. A lot has changed since then, but maybe we have something to learn. 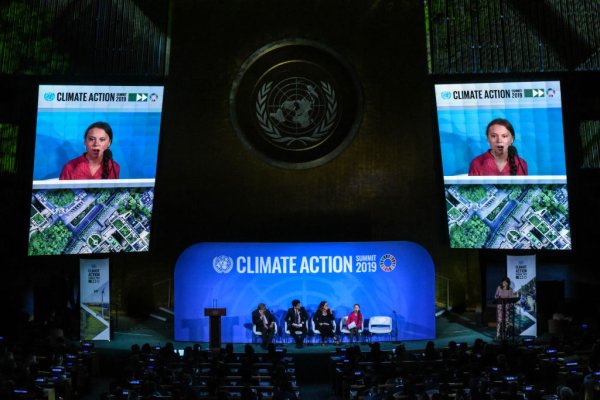 Global Action on Climate Change Blocked By Political Disruptions
Next Up: Editor's Pick