Researchers Discover What Became of a Lost Continent, Now Hidden Under the Adriatic Sea

Researchers with Utrecht University in the Netherlands have uncovered what became of a lost continent that broke off from Africa and wedged itself under Europe, creating mountain ranges that span across 30 different countries from Spain to Iran.

“What we have studied is the very complex history of the geology of the Mediterranean region,” Utrecht professor Douwe van Hinsbergen, the lead researcher on the project, tells TIME. Researchers had already known for decades that a continent created the mountain ranges of Europe and the Middle East. “What that continent might have looked like, however, was until now estimated with rather schematic cartoons,” van Hinsbergen says in an email. With the help of modern software, a clearer picture of that hidden continent emerged.

“What we have done is use very elegant and useful and free plate reconstruction software, called ‘GPlates’ to systematically piece together what that continent looked like… how many there were… and how [it] broke away from Africa,” van Hinsbergen writes. The project was originally scheduled to take three years, but ended up taking 10.

They found that over 200 million years ago, shifting continental plates caused a continent — which the researchers named Greater Adria — to break off from Northern Africa. This created a deep ocean, the last remains of which are the Ionian sea and the Eastern Mediterranean sea between Libya and Turkey.

If you look at a map of modern day Africa, van Hinsbergen points out, you can see a “bite” from where the continent broke off, running from Tunisia to Israel.

Greater Adria was then pushed under southern Europe, creating the mountains the region is known for today, such as the Apennine Mountains of Italy, the Dolomites of Italy, the Balkan mountains of Slovenia, Croatia, Serbia, Bosnia and Herzegovina, Montenegro, Northern Macedonia, Kosovo, and Albania. It also created Greece and much of Turkey.

The last intact remains of the continent lie under the Adriatic Sea. He adds that while Greater Adria was “by far” the biggest continent, there were more, smaller continents that broke away from Africa and were consumed under Europe.

How did researchers figure this out? Using the software GPlates, they analyzed data that, as van Hinsbergen put it, revealed “motions between rock units,” piecing together the history of Greater Adria like a puzzle. They looked at magnetic stripes on the ocean floor, fault motions and magnetic fields stored within rocks themselves. All their data was collected from published literature — around 1,500 papers from scholars in 30 countries — some of which van Hinsbergen and his co-authors had contributed to. The full methodology appears in their published paper.

“The reason why we gave this [continent] a new name, is that these mountains belts, which run from Spain to Iran, cover about 30 different countries… and almost every country had their own names and their own assumptions for what [they] looked like in the past,” van Hinsbergen says.

When explaining his choice of name, van Hinsbergen writes, “I used nomenclature from the Himalaya: the rocks of the Himalaya were also derived from continental crust, but then of the Indian plate. The region from which these rocks derive is known as ‘Greater India’ in the literature, so I exported that addition and called it Greater Adria.”

Van Hinsbergen explains that much of the building materials that are widespread in Italy, Greece and Turkey come from the mountains created by Greater Adria. Marble for example, comes from buried carbon rock that have undergone heat and pressure.

“The marbles that were used by the Romans to make their temples, that is a relic of Greater Adria,” he explains.

When TIME asked him if there’s anything readers should know about his project, he added: “It’s a lot of fun.” 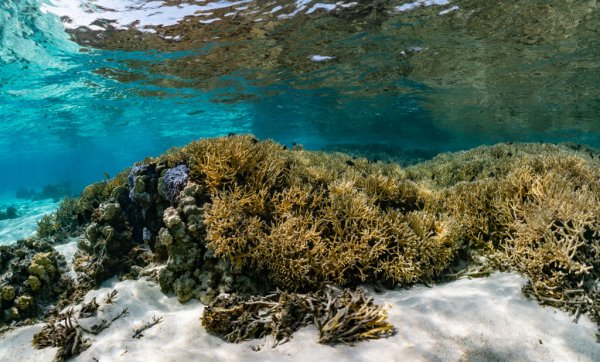 The World's Oceans Are in Trouble. And So Are Humans, Warns U.N. Report
Next Up: Editor's Pick