These Types of Screen Time May Be Worst for Kids' Grades, a New Analysis Suggests

Excessive screen time has been blamed for everything from mental health issues and developmental problems to weight gain among kids, leading many parents to worry about how much is too much.

But a new JAMA Pediatrics analysis of dozens of past studies on screen time and academic performance suggests “how much” may be the wrong question, even at a time when almost half of teenagers say they’re online almost constantly. It found that the types of screen-based technology kids were using—rather than the total amount of time they spent looking at screens—seemed to have the strongest bearing on learning.

The paper examined the findings of almost 60 studies on screen time and academic performance published between 1958 and 2018, which included more than 480,000 kids ages 4 to 18 living in 23 countries. The authors also completed a statistical analysis of about half of those studies’ results, comprising about 106,500 people, to dive deeper into the connection between screen time and school performance.

When pooling the studies’ results, the authors did not find a strong link between total screen time and academic performance—unlike prior studies on the topic. (The authors hypothesize that the differing results may speak to the myriad reasons and ways that young people use technology, which can be difficult to capture in studies.) The study did, however, find specific effects associated with certain forms of technology use.

Increases in television viewing were associated with lower language, mathematics and composite test scores, according to the paper. When broken down even further, adolescents’ grades seemed to suffer more from TV-viewing than those of younger kids, perhaps because young children, who learn from repetition, are more likely to reap educational benefits from watching TV, the authors write. U.S. teens ages 15 to 19 spend more than two hours per day watching television on average, according to data from the Bureau of Labor Statistics; the average child eight or younger spends about the same, according to Common Sense Media.

Playing video games, which the paper says kids do for about 40 minutes per day, was also linked to lower composite academic scores, but not weaker math and language performance, the authors found. Here, too, the results were stronger for teenagers than younger children, the paper says.

This analysis doesn’t, however, prove cause and effect, and it’s not clear why some forms of screen use are more strongly correlated with kids’ school performance than others. It’s possible that excess time in front of a television or computer prevents kids from engaging in more productive behaviors, such as studying, sleeping or exercising, the authors write. Excess TV-watching may also decrease attention span or disrupt cognitive development, the paper says.

While the paper did not uncover strong links between academic performance and time spent on the internet or social media, the authors note that those activities warrant more study, especially since their effects can depend heavily on how and why mobile devices are used. It’s also worth limiting kids’ screen time in general, since sedentary behavior is linked with an array of physical and mental health issues. The American Academy of Pediatrics recommends kids ages two to five cap their screen time at an hour a day, and says parents should also limit older kids’ use. 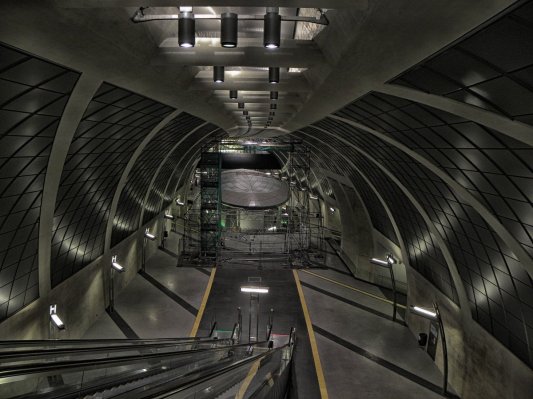 Why DARPA Wants Underground Tunnels For 'Experimentation'
Next Up: Editor's Pick