Michelle Williams spoke about the power of pay equity while accepting the award for Lead Actress in a Limited Series at the 71st Primetime Emmy Awards.

Williams, who won for her portrayal of the dancer and Broadway star Gwen Verdon in FX’s Fosse/Verdon, thanked the studios behind the show for paying her equally, saying she felt consistently heard and respected throughout the process of making the series.

“My bosses never presumed to know better than I did about what I needed in order to do my job and honor Gwen Verdon,” she said. “Thank you so much to FX and Fox 21 studios for supporting me and paying me equally. Because they understood that when you put value into a person, it empowers that person to get in touch with their own inherent value. Where do they put that value? They put it into their work.”

Williams continued, taking the moment to call for equal pay throughout the entertainment industry.

“The next time a woman, and especially a woman of color, because she stands to make 52 cents on the dollar compared to her white male counterparts, tells you what she needs in order to do her job, listen to her, believe her, because one day she might stand in front of you and say thank you for allowing her to succeed because of her workplace environment, and not in spite of it,” she said.

Williams drew cheers and brought the Emmys audience to its feet—but it was her best friend and Emmys date Busy Philipps’ teary and prideful reaction that continued to set the bar for friendship ever higher.

Williams’ speech comes more than a year after it was reported that she was paid less than $1,000 for reshoots on the film All the Money in the World while her co-star, Mark Wahlberg, was paid $1.5 million. (Wahlberg later donated $1.5 million to the Time’s Up Legal Defense Fund in his co-star’s name.)

Her words drew widespread praise from people across Hollywood and beyond. 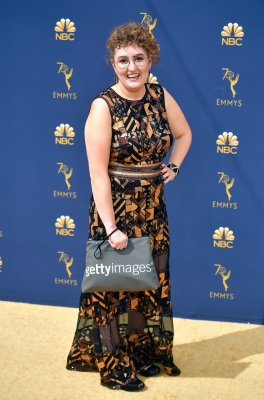 A Writer for Barry Allowed Twitter to Dress Her For the 2019 Emmys
Next Up: Editor's Pick