Out of all of the roughly 100 truth-seeking earth-dwellers who showed to the “Area 51 raid” before dawn on Saturday, “plunger guy” may have had the most flair.

Even if you didn’t believe enough to make the trip to Area 51 to see things for yourself this weekend in Nevada, there are still shenanigans to enjoy. And this video capturing a band’s best intentions is that primo essential viewing opportunity.

It all went down at around 3 a.m. Saturday, when a man, aptly dubbed “plunger guy,” raised a plunger high in the air and led a group of like-minded individuals toward the Area 51 barricade for a “trial run.” And you better believe they did the trademark Naruto run from the popular manga series. It was the original raid-plotting method proposed by the total hoax, though totally widespread Storm Area 51 Facebook event that captain-of-the-chaos Matty Roberts began as a joke.

Read More: Laughs, Masks and a ‘Sense of Community.’ Most People Came in Peace to the Area 51 Raid. Here’s What Actually Happened

The shaggy blond-haired plunger man named Ben Schneider a.k.a. Reckless Ben on YouTube, who told reporters he was Gary Winthorpe (a Danny Duncan reference!) from Ohio, and a his fellow Alienstock attendees got just steps before the gates of the secretive military facility before stopping, but that doesn’t make it any less glorious.

While they may not have gotten to poke around to see what’s being so closely guarded, luckily for us, news teams were on the scene to witness their valiant truth quest below.

Plunger guy did go on to admit that people weren’t going to really raid Area 51.

“It was a bunch of millennials that came out. They all came out with their camera just trying to vlog the whole thing so nobody ended up storming. It was kind of lame,” he said.

Like the Naruto runner legend before him who raced through a live broadcast, plunger guy has made quite an impression.

“We’re gonna plunge the truth,” he told Mashable. Plunge on.

Even though as many as two million people signed up, far less were in Rachel and Hiko, Nev., for the far more practical music festivals. Happily, a jovial interplay between guards and “raiders” has prevailed, but there have been some arrests.

One thing’s for sure. No military warning could ever stop his steadfast commitment to a close encounter with the gates. 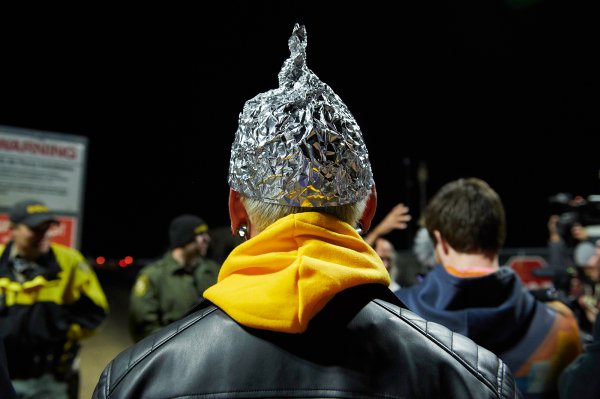 Area 51 Raid But Make It Fashion: It Takes a Lot to Stand Out at Alien-Themed Festival But This Guy's Tin Foil Hat Is Working
Next Up: Editor's Pick