Could Trump Lose the Republican Nomination? Here's the History of Primary Challenges to Incumbent Presidents

From the very beginning of his presidency, Donald Trump has never really left “campaign mode” — but as the next election gets closer, that approach has turned into a more concrete play for victory in 2020. But Trump is not alone. He has challengers in the 2020 Republican primary, most notably, former Massachusetts Governor Bill Weld, former South Carolina congressman Mark Sanford and former Illinois congressman Joe Walsh.

This campaign is the first time an incumbent president has faced a challenger with name recognition within his own party since 1992, when Republican president George H.W. Bush faced a challenge from more conservative Pat Buchanan — but that wasn’t the only time a sitting President has had to fight for his spot on the ballot.

Before primary elections became the dominant way to pick a nominee, party leaders were more able to either shut down challengers or smoothly pass the nomination to someone else. Notably, four incumbents who were denied the nomination in the 19th century — John Tyler, Andrew Johnson and Chester A. Arthur — had been Vice Presidents who rose to the Presidency following the deaths of their predecessors, perhaps suggesting they’d never won their parties’ full support in the first place.

Both Tyler and Fillmore, who were Whig Party presidents, were denied the nomination because the political battles surrounding slavery: Tyler in 1844, over the annexation of Texas, which he supported but which would upset the balance of free and slave states; Fillmore in 1852 over his support of the Fugitive Slave Act. (Democratic President Franklin Pierce, who ended up winning the 1852 election, also lost his party’s nomination after one term, as many Northern Democrats felt his support for the Kansas-Nebraska Act was too conciliatory to pro-slavery Southerners.) Johnson was the first president to be impeached, in February 1868, so he didn’t get either party’s nomination. And Arthur, who succeeded President James Garfield, was denied the 1884 Republican nomination, though he didn’t actively seek it because he was suffering from kidney disease.

Some of the first primaries were held in 1912. Barbara A. Perry, the Director of Presidential Studies at the University of Virginia’s Miller Center of Public Affairs, who spoke to TIME as part of a presidential-history partnership between TIME History and the Miller Center, points out that those 1912 primaries were products of the progressive-era populist movement, as former President Teddy Roosevelt unsuccessfully tried to unseat incumbent President William Taft by forming the Progressive Party, also known as the Bull Moose Party.

Even after that period, not all primaries can be evaluated the same way. In fact, the system in use today is only about 50 years old. Candidates didn’t usually have to compete in all of the primaries until party reforms in the early 1970s made primaries (rather than party leaders) key to determining who gets the nomination.

“New rules make it easier for anyone to run,” says Hans Noel, professor of Government at Georgetown University and co-author of The Party Decides: Presidential Nominations Before and After Reform, “but also created more need for informal pressure for making sure things don’t go awry.”

While an incumbent President has never lost a primary nomination in modern U.S. history, these five challengers put up a serious fight.

In 1952, Tennessee Senator Estes Kefauver challenged President Harry S. Truman for the Democratic Party nomination. Even though he didn’t win the nomination, he changed the entire state of the race. When Kefauver won the New Hampshire primary — the first primary of the campaign season — Truman decided not to run for re-election.

At the time, Democrats were bitterly divided. The Northern Democrats had spearheaded the addition of a civil rights plank to the party platform at the 1948 convention, leading the Southern Democrats to form a spin-off “Dixiecrat” coalition. Any candidate would face trouble securing widespread support. “[Truman’s] defeat by Kefauver in the New Hampshire preference primary emphasized that he was not the unanimous choice of Northern Democrats,” TIME reported in its April 7, 1952, article on Truman’s dropping out.

On top of that, once it became clear that World War II hero Dwight D. Eisenhower was poised to get the Republican nomination, Truman, whose Administration had been entangled in scandals in 1951, realized he probably wouldn’t be able to win anyway. Illinois Governor Adlai Stevenson ended up winning the Democratic Party nomination, but losing the general election to Eisenhower. Meanwhile, Truman would tie Richard Nixon for the dubious honor of the lowest approval ratings upon leaving office.

While President Lyndon B. Johnson won the New Hampshire primary on March 12, 1968, politicos thought he should have beaten radical anti-war Democratic Senator Eugene McCarthy of Minnesota by a larger margin than the seven points with which he pulled it off. “People thought that it was close for an incumbent president and [Johnson] looked vulnerable because of the Vietnam War,” says Perry.

TIME reported that McCarthy’s surprisingly strong showing in the New Hampshire primary was a statement that was “as much anti-Johnson as antiwar,” citing a NBC poll that found more than half of Democrats didn’t even know McCarthy’s position on Vietnam. Less than a week after New Hampshire, Attorney General Robert Kennedy jumped into the race. Then, on March 31, Johnson announced he wasn’t going to run for re-election.

As TIME reported in the April 12, 1968, article on Johnson dropping out, “So low had Johnson’s popularity sunk, said one Democratic official, that last-minute surveys before the Wisconsin primary gave him a humiliating 12% of the vote there.” But even with Johnson out of the race, his decisions on Vietnam plagued his Vice President, Hubert Humphrey, the eventual nominee. Protesters took to the street during the 1968 Democratic National Convention in Chicago to protest the fact that Humphrey won the nomination without campaigning in a primary, and Humphrey went on to lose the Presidential election to former Vice President Richard Nixon.

As a result of this race, both the Democratic and Republican parties made rules changes in the early 1970s that created today’s modern primary-centric nomination process.

The 1976 campaign season was the year in which primaries started to matter more than ever before, and is considered the closest a sitting President has come to losing his party’s nomination in modern history. President Gerald Ford — who was elected to the House of Representatives, but became first Vice President then President thanks to the resignations of Spiro Agnew and Richard Nixon — was vulnerable, thanks especially his unpopular decision to pardon Nixon. The nomination was still up for grabs when the Republican National Convention started in Kansas City, Mo., but Ford eked out win the day before the convention was supposed to end.

That summer, TIME reported that 55% of Americans believed it was wrong for Gerald Ford to pardon Nixon, and that polls showed Republicans rated Ronald Reagan higher than Ford in leadership and decisiveness. But some politicking by Ford’s strategists enabled the incumbent president to edge out his opponent. He racked up 1,187 delegates compared to Ronald Reagan’s 1,070, which was barely more than the 1,130 he needed to secure the nomination.

In the general election, Democratic Georgia Governor Jimmy Carter ended up winning for, as pundits said, being the opposite of Nixon. “Battered by the Vietnam War, Watergate, scandals and abuses in high places,” TIME noted in a cover story that year, “many Americans clearly welcome Carter’s confidence in them and the worth of their country, and his soft-spoken promise to restore a moral purpose to national life.”

After Jimmy Carter’s first term in the White House, he got a challenge in the form of Massachusetts U.S. Senator Ted Kennedy, the brother of John F. Kennedy and Robert F. Kennedy. Carter won 36 primaries that year, but Kennedy’s 12 victories included important ones in New York and California, and he didn’t concede until Aug. 11, 1980, at the Democratic National Convention at Madison Square Garden in New York City. Unlike his brothers, “Kennedy could not articulate any appreciation of the economic anguish of Middle Americans,” as TIME put it back then.

At the DNC, he endorsed Carter in a sentence and laid out the Democratic Party’s vision in what TIME called “the speech of his life” in his 2009 obituary. That speech was also the launchpad for a new chapter in his Senate career.

Ronald Reagan went on to win the general election, and Carter’s loss made Democratic Party officials think that perhaps they needed to once again have more of a role in choosing the nominee — leading to the introduction of superdelegates as part of the nominating process for the 1984 election.

When he decided to challenge President George H.W. Bush in 1992, conservative pundit Pat Buchanan never won a primary, but he helped expose a rift in the GOP — thus opening room for Ross Perot to make a third-party run, and arguably foreshadowing Trump’s eventually election. As Buchanan framed the difference between the candidates, while launching his campaign in December 1991: “[Bush] is a globalist and we are nationalists. He believes in some Pax Universalis; we believe in the old Republic. He would put America’s wealth and power at the service of some vague New World Order; we will put America first.” On top of that, Buchanan and his supporters felt betrayed by Bush’s having broken his famous campaign pledge, “Read my lips: No new taxes.”

Does a primary challenge hurt an incumbent?

“The conventional wisdom is that primary opponents harm incumbents in the general election, although this is hard to prove,” says Robert G. Boatright, editor of The Routledge Handbook of Primary Elections.

Crucially, it’s difficult to establish cause and effect when a challenged incumbent loses the general election. For example, embattled incumbents Ford, Truman and LBJ had all come to the presidency either upon the death or departure of their predecessors, the Miller Center’s Perry notes, so it’s possible the public thought they didn’t “live up to the previous president.” And even those challenged incumbents who weren’t in that situation were facing troubles of their own.

“It’s probably not that the challenge itself weakened the nominee,” says Noel, “but the fact that they were weak drew their challenge in the first place. So just being challenged is not a good sign.”

That may be one reason why it’s not more common for Presidents today to get primary challengers, even though the current system of primaries gives party leaders less power to steer the selection process. Party leaders still hold critical sway behind the scenes and can discourage people from running altogether, and, adds Noel, fewer people may be interested in disagreeing with a President from within a party anyway.

“Parties were still big tents and had factions and wings, and now parties are so polarized and monolithic,” says Perry. “If our parties are becoming more monolithic, then who is there to challenge?” 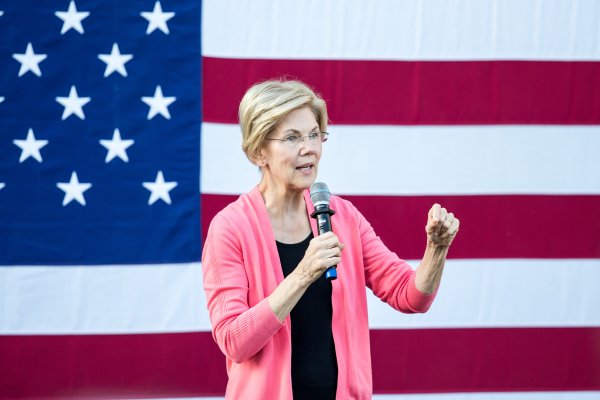 Warren Defends Saying She Was Fired for Being Pregnant
Next Up: Editor's Pick