'This Is an Emergency. Our House Is on Fire.' Greta Thunberg Addresses New York's Climate Strike

On Friday, hundreds of thousands of young people around the world took part in strikes to demand action on climate change. More than 4,500 strikes were planned worldwide in over 120 countries, and more than 500 strikes are registered in the U.S. alone.

The strike, which is organized by The Climate Strike Coalition, was intended to kick off a week of events to highlight climate change.

One of the flagship protests on Friday was in New York City, three days before the U.N. Climate Summit. Tens of thousands of people turned out for the strikes with climate group 350.org estimating that as many as 300,000 attended. New York’s strike was held jointly with a Puerto Rico Day of Action; Friday marks the second anniversary of Hurricane Maria, which experts estimate killed at least 2,975 people on the island.

The New York protest culminated in a rally featuring speeches from several prominent climate leaders, including Greta Thunberg, the 16-year-old Swedish climate activist who launched the global Fridays for Future — which led to the climate strike — movements last year. In August of 2018, Thunberg began protesting in front of the Swedish parliament, rather than attending school, to demand action on climate change. Her actions soon sparked a movement and led young people around the world to start to “strike” from school on Fridays to demand action.

To reach the United States, Thunberg sailed across the Atlantic for two weeks in a racing sailboat designed to be emissions free.

Last week, the New York City Department of Education announced it would grant excused absences with parental consent of all students participating in the New York climate strike.

“This is an emergency. Our house is on fire,” Thunberg told the crowd. “We will do everything in our power to stop this crisis from getting worse.” “Why should we study for a future that is being taken away from us. That is being sold for profit.”

“We demand a safe future,” she said. “Is that really too much to ask?”

A rally for Puerto Rico Day of Action was held at 11:00 a.m. in Foley Square, Manhattan. A rally in support of the climate strike is taking place at 12:00 p.m. in Foley Square, and protestors will march to Battery Park, where Thunberg and other climate activists will start to speak at 3:00 p.m.

Besides Thunberg, speakers include Vic Barrett, a 20-year-old plaintiff in the climate lawsuit Juliana vs U.S. in which 21 young people are suing the U.S. government for inaction climate change, and Xiuhtezcatl Martinez, a 19-year-old climate Activist and Youth Director of the advocacy group Earth Guardians who’s also a plaintiff in Juliana v. U.S., and performances from actors and musicians Haden and Willow Smith.

Many school children are among the crowd who have turned out. Beatrix Worthington, age 11, tells TIME she came out because she “really feels like there should be a change.” Leah Josephson, age 12, took the day off from her school in Brooklyn to attend the strike. “It actually really scares me… the condition our planet is in,” she says. “This is a call to attention, that is what we need right now, and I wanted to be a part of it.”

“I feel like to inspire change… you need a lot of people.” “I felt inspired to come here,” Nora Spingarn, age 12, who also came to Manhattan from Brooklyn for the strike tells TIME.

Colorful slogans are a feature of the strike. “Make America Greta again,” read one, “if climate can change, you can too,” read another.

“The world is taken for granted a lot… people are just destroying it without any attention,” Nineteen-year-old Lisa Cochran tells TIME, holding a sign that says “Bill Nye is Counting on You.”

Jilda Parisi, age 66, held a sign with a photo of the burning Amazon rainforest cut into the shape of lungs, and tells TIME that she’s deeply worried the recent forest fires in the Amazon rainforest because it’s “literally the lungs of the earth.”

There were people of all ages in the densely packed crowd. Teenagers sat in circles on the grass; parents carried small children on their shoulders. People walked around selling water and pins that read “there is no planet B.”

Davia Decroix held her eight-year-old son Henry on her shoulders, and he held a white sign that read “CLIMATE STRIKE!” She tells TIME Henry and his twin brother Oliver feel inspired by Greta.

What are the climate strike protesters demanding?

The strike in New York has three central demands. First, they ask for an “immediate” end of the “extraction and consumption” of fossil fuels, and an end to the sway they argue fossil fuel companies have on the media and politics.

Second, they ask that “frontline communities, workers, and those least responsible for the climate crisis” be prioritized in transitioning to renewable energy. Third, they ask for “accountability from fossil fuel executives, the Global North countries and institutions most responsible for causing the climate crisis,” ask that big polluters be excluded from decision-making spaces, and “they make reparations both by paying for climate damages and investing in a just transition to renewable energy.”

“We want our elected officials to know we won’t take no as an answer. We’re striking because we can’t sit idly by,” 18-year-old Arielle Martinez-Cohen, the partnerships director of Zero Hour, a youth-led climate movement, tells TIME. “This is the biggest crisis of our time, and so we’re out here doing something about it.”

When asked what she hopes to accomplish today, Varshini Prakash the co-founder and executive director Sunrise Movement, tells TIME that “we want our politicians to understand that we expect nothing short of a Green New Deal.” The Sunrise Movement is an American youth-led political action organization that advocates political action on climate change. Originally founded to election supporters of renewable energy in the U.S.’s 2018 midterm elections, Sunrise has since become focused on supporting the Green New Deal.

Varshini says she’s proud of children all over the world who have turned out, and feels the strike today is “truly historic.” “I woke up and saw images of 400,000 people marching in Australia… one point four million people in Germany. People in Mumbai, India.” She said the turnout has been “far bigger than anything [she] could have imagined.”

She said so many people she knows are getting involved. “Young kids who are 16-years-old, saying, ‘every single person I know and go to school with,’ not just here but like my cousins in India, ‘are on strike right now’.”

Varshini said she encourages children to protest, talk to their classmates, talk to their neighbors and having uncomfortable conversations to highlight the issue of climate change. “Our politics is set up to make you believe that the way you participate in our democracy is by voting every two or four years. It’s not. This is how you show what you believe and what you need from our government and its people,” she says.

Activists from all over the world have gathered in New York

Youth activists from all over the world have flown to New York for the strike, ahead of the U.N. Climate Summit next week where world leaders are gathering to discuss action on climate change.

Nineteen-year-old Artemiza Xakriabá, a youth leader in the National Articulation of ind Peoples of Brazil, tells TIME via a translator that she’s in New York to “representing all the youth of Brazilian indigenous people. I’m once again asking for help to end the climate crisis in the world… I would like our voices to be heard and respected and for people to bring solutions to the climate crisis to help us.” Xakriabá has been involved with climate organizing since she was seven.

Youth organizers from New York city have been taking part in protests each week for some time, many inspired by Greta Thunberg. Fourteen-year-old Alexandria Villaseñor, one of the first climate strikers in the U.S. who first started striking 41 weeks ago, tells TIME that “just seeing how many more students are getting involved every single Friday, is really inspirational.” She says she didn’t expect the movement to grow so quickly in just a year, “but seeing that is just really shows how powerful the youth are.”

Villaseñor became involved with the climate movement after her family in Northern California was affected by the Paradise fire — one of the worst wildfires in California history. “Seeing how my community was being affected by climate change, [and] communities all around the world is what really made me start to see how I really need to do something,” she continues.

After seeing Thunberg speak at the 2018 United Nations Climate Change Conference, Villaseñor started a climate strike of her own. For the past 41 consecutive Fridays, Villaseñor has sat outside the U.N. in New York rather than go to school. Slowly more children have joined her, and her strike grew into a movement across the U.S. She has also helped other students organize strikes around the world. 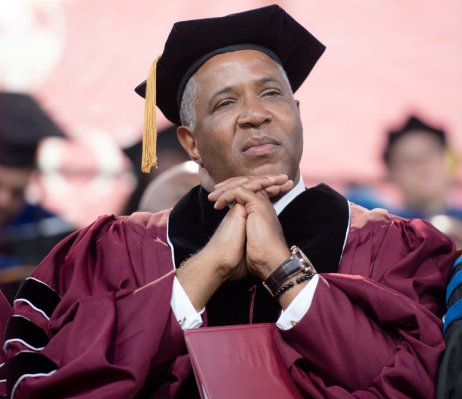 The Billionaire Who Pledged to Pay Off Student Debt for Morehouse Students Extends His Promise to Parents, Too
Next Up: Editor's Pick