Canadian Prime Minister Justin Trudeau admitted Thursday that he’s unsure whether there are more images of him in blackface or brownface beyond the ones that have already been released.

Trudeau has been under fire since Wednesday, when TIME published a photograph of him in brownface at a party at the private school where he was teaching in the spring of 2001.

In his initial apology on Wednesday night aboard his campaign plane in Halifax, Nova Scotia, Trudeau admitted to wearing blackface once before, during a high school performance of “Day-O,” a Jamaican folk song famously performed by African American singer and civil rights activist Harry Belafonte.

Since then, a third instance of the Prime Minister with darkened features has emerged—a video from the early 1990s that shows Trudeau in blackface, raising his hands in the air and sticking out his tongue. Zita Astravas, the media relations head of the Liberal Party of Canada, first confirmed that the video was of Trudeau.

On Thursday afternoon, Trudeau—who is currently in the midst of a reelection campaign—spoke in Winnipeg, Manitoba, about the scandal. After he was asked multiple times whether more photographs or videos of him in blackface or brownface exist, Trudeau said, “I am wary of being definitive about this because the recent pictures that came out I had not remembered.”

“And I think the question is: ‘How can you not remember that?’” he continued. “The fact is I didn’t understand how hurtful this is to people who live with discrimination every single day.”

The 47-year-old leader of the Liberal Party of Canada also reiterated his apology for the scandal while speaking to the press.

“I want to begin by saying a few words directly to racialized Canadians who face discrimination every single day in their lives, even in a country like Canada. What I did hurt them … This is something that I deeply, deeply regret.”

Justin Trudeau, now the prime minister of Canada, appears in dark makeup on his face, neck and hands at a 2001 "Arabian Nights"-themed party at the West Point Grey Academy, the private school where he taught.
TIME

Trudeau was also questioned more than once on when he became aware that blackface was racist. The Prime Minister cited his time working with the community in Papineau—a diverse area of Montreal—as his moment of realization.

“Darkening your face, regardless of the context or circumstances, is always unacceptable because of the racist history of blackface,” he also said.

When a reporter used the word “makeup” to describe Trudeau’s usage of blackface, the Prime Minister responded, “I appreciate you calling it makeup, but it was blackface. And that is something that is just not right.”

“It is something that people who live with the kind of discrimination that far too many do because of the color of their skin, or their history, or their origins, or their language, or their religion, face on a regular basis. And I didn’t see that from the layers of privilege that I have. And for that, I am deeply sorry and I apologize,” he added.

The revelations have placed Trudeau’s reelection campaign under scrutiny, and the story has dominated Canadian media since TIME published the exclusive after obtaining a copy of the school’s yearbook, which included a photograph of the incident, earlier this month.

The picture was taken at an “Arabian Nights”-themed gala and shows Trudeau, then the 29-year-old son of the late former Prime Minister Pierre Trudeau, wearing a turban and robes with his face, neck and hands completely darkened. The photograph appears in the 2000-2001 yearbook of West Point Grey Academy, a private day school where Trudeau was a teacher.

The United States has a fraught history of white performers darkening their faces to demean and dehumanize African Americans, including in minstrel shows in the 19th century. Minstrel shows were also performed in Canada, and McGill University in Montreal notes that blackface “dates back to the days of blackface minstrelsy—a form of 19th and early 20th century entertainment that expressed nostalgia for slavery and racist violence.”

Write to Madeleine Carlisle at madeleine.carlisle@time.com and Anna Purna Kambhampaty at Anna.kambhampaty@time.com. 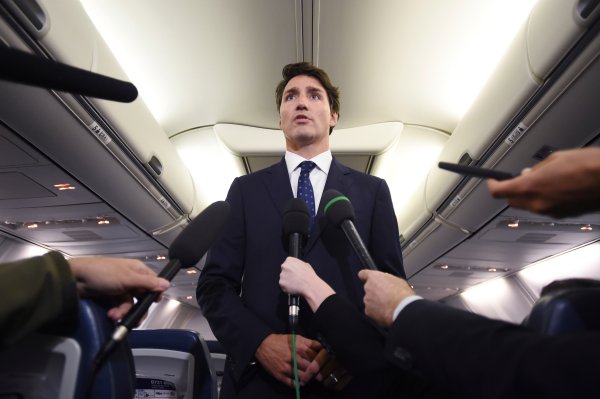 Trudeau Also Admits to Blackface After TIME Report
Next Up: Editor's Pick