Colt Says Its Decision to Stop Making AR-15 Rifles for Civilians Is Driven by Customers. Experts Aren't So Sure

In a statement, Colt’s CEO Dennis Veilleux said the decision to suspend production was entirely market-driven. The statement made no mention of the mass shootings that involved the style of semi-automatic weapon, which include the Sandy Hook and Parkland tragedies. And though neither of the firearms in those two shootings were manufactured by Colt, the gunmaker did own the patent for the design of the widely popular AR-15 until it expired in the 1970s, when other companies could begin making and selling similar types of weapon.

“The fact of the matter is that over the last few years, the market for modern sporting rifles has experienced significant excess manufacturing capacity,” he said, while also emphasizing that the company “is committed to the Second Amendment.”

The gunmaker also cited a need to focus its manufacturing capabilities on outstanding contracts with military and law enforcement groups.

“Currently, these high-volume contracts are absorbing all of Colt’s manufacturing capacity for rifles,” Veilleux wrote.

Despite their statement, experts wonder whether the company made the decision with other factors in mind.

“The public is getting very alarmed about what’s happening with assault rifles in the hands of potential mass shooters,” John Donohue, a Stanford Law professor with expertise in gun policy, tells TIME. “Colt may just be feeling better to get out of that particular market, and they’re offering this purely economic manufacturing argument rather than addressing the political realities right now as the justification for this decision.”

AR-15-style rifles were used in the mass shootings that took place at Sandy Hook Elementary in 2012, an Aurora, Colo., movie theater in 2012, the Vegas Harvest music festival in 2017 and Marjory Stoneman Douglas High School in 2018. The Las Vegas gunman had several Colt rifles among the 24 guns found in his hotel rooms. The guns used in the other shootings were made by other manufacturers.

Timothy Lytton, author of Suing the Gun Industry and a law professor at Georgia State University, has a similar view to Donohue.

“They don’t want to be associated with a gun that’s becoming increasingly viewed as a shabby crime gun, when their brand is supposed to be bigger,” he says. “The danger for them in this—and this is something that they’re well aware of in their messaging, is that when gun companies tend to respond to this sort of pressure, there’s a huge backlash from the gun rights community.”

Following pressure from gun control advocates, some retailers have risked losing gun rights proponents as customers while they take steps to enhance their safety policies. National chains including Walmart, CVS, Walgreens, Publix and Kroger all asked customers to stop openly carrying firearms inside their stores after gunmen killed more than 30 people at an El Paso, Texas, Walmart and in a Dayton, Ohio, entertainment district less than 24 hours apart last month. Dick’s Sporting Goods also announced it would remove firearms from 125 of its retail locations. (The company had already banned the sale of assault-style weapons after the Parkland shooting.)

But those percentages are likely much, much lower among Colt’s customer base. And the last time Colt tried to make the industry a little safer by designing a firearm that could only be unlocked and fired by a user wearing a radio-frequency wristband, the plan backfired. Consumers began to worry whether the innovation would affect what kind of firearms they could purchase in the future. “There was a lot of pressure in the gun rights community against these sorts of weapons,” Lytton said.

Now Colt, like other gun makers, has to balance pressures from both gun control advocates and its customers. Though the gunmaker says it has been “a stout supporter of the Second Amendment for over 180 years, remains so, and will continue to provide its customers with the finest quality firearms in the world,” its full reasoning for ending the production of AR-15 rifles for civilians might be a tad more complicated than that.

“This is a sort of delicate dance,” says Lytton, “to sort of walk that thin line between pressure on both sides of this debate.” 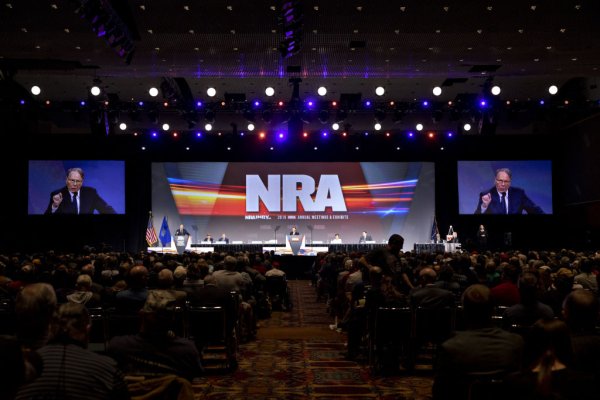 NRA Is Suing San Francisco Over 'Domestic Terrorist' Label
Next Up: Editor's Pick