Parts of southeast Texas saw catastrophic flooding after Tropical Depression Imelda dumped more than 40 inches of rain in some areas. At least five people have died as a result of the storm, according to the Associated Press. Hundreds of people called authorities for rescue and a cleanup effort is now underway.

One man thought to be in his 40s or 50s died after his vehicle was found submerged in water in the Houston area, Harris County Sheriff Ed Gonzalez said. The driver was approaching a freeway when the water level was about eight feet high, Gonzalez tweeted.

“The driver paused briefly, then accelerated into the water, causing his van to go under,” he wrote.

A 19-year-old man, Hunter Morrison, died after being electrocuted and drowning while he was trying to move his horse, according to a Facebook post from his brother, Caleb Morrison, that was shared by the Jefferson County Sheriff’s Office. The office received numerous calls about Morrison’s death, according to the post. “We will let his family’s statement stand,” read the post.

Authorities found a 52-year-old man, named Mark Dukaj, dead inside his pickup truck along a highway near the Texas-Louisiana border on Thursday, the Associated Press reported. An autopsy should clarify why he died. A Jefferson County spokeswoman told the AP that investigators currently believe Imelda caused Dukaj’s death but don’t think that he drowned, even though floodwaters had entered his truck.

In other areas hit by the storm, people reported being trapped by flooding, and floodwaters caused several people to abandon their vehicles on the freeways. Houston Police Chief Art Acevedo said more than 200 vehicles were towed in the city as of Thursday night; he said there were likely to be more.

Imelda stopped all flights at Houston’s George Bush Intercontinental Airport, forced the evacuation of a hospital and a TV station and flooded roads and homes on Thursday. The Houston airport announced Friday morning that its airfield had opened to arriving and departing flights as of 4 a.m. Central Time. More than 900 flights were cancelled or delayed in the Houston area, according to the AP.

As of Friday morning, a total of 337 flights were cancelled at the airport and 45 flights were delayed. Several airlines issued flight waivers earlier in the week, including United, Delta and Southwest.

Imelda set a new record for daily maximum rainfall in Houston, with 9.18 inches on Thursday, the National Weather Service said. The record amount of rainfall breaks a previous record of 6.92 inches of rain in one day, which was set in 1979. The storm also set a record for the wettest day in September, surpassing the 7.73 inches of rain that fell on Sept. 13, 2008.

Jefferson County received more than 40 inches of rain during Imelda over a span of 72 hours, according to the National Weather Service, which would make it the seventh-wettest tropical cyclone in the U.S., the AP reports.

While the tropical depression subsided by Friday morning, the National Weather Service warned of severe thunderstorms and flash flooding across the Southern Plains and parts of Texas, Louisiana and Arkansas. Imelda’s damage is still being felt in parts of southeast Texas, where high water levels remain and several roads stay closed.

Officials with Harris County, where Houston is located, told the AP that there were at least 1,700 high-water rescues and evacuations in an effort to get people to shelters, as the sheer amount and length of rainfall took several by surprise. Imelda also hit and flooded portions of southwestern Louisiana.

KPRC Click2Houston reports that two barges broke loose at San Jacinto River and hit a bridge due to rising waters and strong currents. Authorities closed down the East Freeway in both directions and said the bridge could not reopen until the contents of the barge were investigated because of the possibility they contain combustible materials.

Imelda drew immediate comparisons to Hurricane Harvey, which set record-breaking amounts of rainfall when it hit the Houston area in 2017, with totals around 51 inches of rain in some areas.

Local officials said that residents were fearful that flooding caused by Imelda could be even worse than the slow-moving and more-powerful hurricane from two years ago, which was blamed for the deaths of at least 68 people.

“It is stressful. People are remembering Harvey,” Ryan Holzaepfel, spokesperson for Chambers County’s emergency management agency, told TIME. “These same people were affected by Harvey so this is fresh on their minds and we’re getting reports from people that it’s worse than Harvey. It’s more water in this area than they received during Harvey.”

An aerial view of Sargent, Texas, which has been affected by the massive rainfall amounts dumped by Tropical Depression Imelda.
Mark Mulligan—Houston Chronicle/AP

While Harvey focused much of its rain on Houston and the surrounding area, Imelda drenched areas farther east into Beaumont, Texas and southwestern Louisiana, by Wednesday evening. The worst conditions were just west of Beaumont as of Thursday morning, Deger, the Accuweather meteorologist, told TIME.

In Jefferson Count, which saw more than 40 inches of rain, officials said on Facebook that they are “seeing unprecedented flooding,” “rain is falling faster than we can drain,” and ordered that residents evacuate Bevil Oaks.

Texas Gov. Greg Abbott tweeted on Thursday afternoon that “a state of disaster had been declared in 13 counties.”

“It does appear the rain is decreasing and heading south and the weather conditions do appear to be improving, although there is still rain in the area,” Houston Mayor Sylvester Turner said at a press conference Thursday afternoon. He urged caution, noting that “Mother Nature has a mind of her own”, but maintained, “we’re not anticipating anything like this tomorrow.”

Acevedo, the Houston police chief, started a Facebook live broadcast as he trudged through a flooded neighborhood, and helped shepherd adults and kids to higher ground. More than once, he is asked by residents if they can bring their cats and dogs. He responded, “Yes.”

One boy told Acevedo through tears that his name was Logan and he was nine years old. “You’re OK,” Acevedo said, trying to console him. “It’s OK, mommy and daddy are there,” a woman who appeared to be his mother was heard saying in the background. He was later heard screaming for his parents, as Acevedo continued to reassure him.

Videos appeared to show water rising to as high as waist-deep in some areas. A man in a yellow poncho was seen wading through the water with a toddler in his arms. As thunder crackles above, Acevedo said, “I don’t want to be in the water with that stuff going on. That makes me nervous.”

Not all residents felt they need the help though: “We’re good, I’m a couple of houses down. We’re good right now,” one man said. Another man responded, “Look, you said ‘right now’ but it’s still raining and more rain is coming so the best thing is to get out of here to high ground.” Acevedo chimed in, saying “I would recommend you go to high ground.”

Several times, Acevedo tried to persuade reluctant residents to leave. Sometimes it seemed to work. In one case, Acevedo told a man, “with little kids, I would really recommend you come with us.” After he appeared to agree, Acevedo said, “We just talked a family into going, thank God.”

The original version of this story misstated the county where Houston is located. It is in Harris County, not Harrison County. 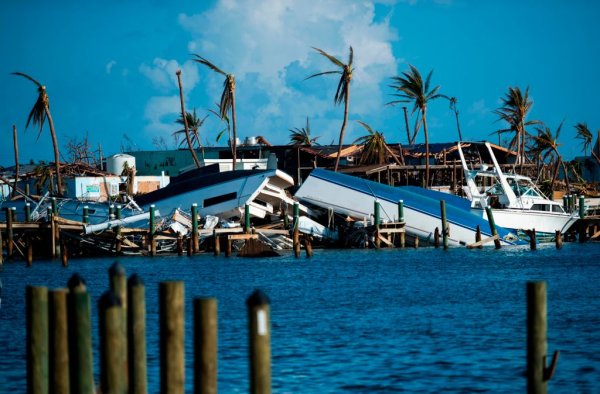