'Workers Are Tired and Frustrated and Angry.' Uneven Economic Growth Fuels Walkouts Like the GM Strike

United Auto Workers (UAW) members picket line at a gate at the General Motors Flint Assembly Plant after the UAW declared a national strike against GM at midnight on September 16, 2019 in Flint, Michigan.
Bill Pugliano—Getty Images
By Alana Semuels

The labor movement has long been struggling in the U.S., as fewer workers join unions and as high-profile organizing drives, like a June attempt to unionize Volkswagen employees in Tennessee, fall short.

But American workers, feeling left behind as the economy grows around them, are joining together to demand a bigger slice of the pie. On Sept. 16, 50,000 General Motors workers walked off the job in their first strike since 2007, protesting idled plants and low wages. Nearly 8,000 Marriott workers went on strike in eight cities last year, while 31,000 supermarket employees in the Northeast did the same in early 2019. In the past year, tens of thousands of teachers walked out of their classrooms to demand better pay and funding. In all, nearly half a million workers participated in strikes and work stoppages last year, the most since 1986. The labor disruptions show no sign of abating; over 80,000 Kaiser Permanente workers in six states say they are walking out for a week starting on Oct. 14 in what would be the largest American strike since 2000.

The recent labor unrest is in part fueled by uneven economic growth. While companies are prospering and the stock market hovers near all-time highs, the benefits haven’t been felt by many workers, who are often stuck in temporary jobs with no benefits.

Paradoxically, the strong economy also emboldens workers. For a long time, the memory of the Great Recession made many afraid to jeopardize their jobs. But today there are more than 7 million job openings in the U.S., compared with just 2.2 million a decade ago, according to government data. When more jobs are available and unemployment is low, people feel more confident in demanding better pay and benefits. “Workers are tired and frustrated and angry with stagnant wages and job insecurity, and in a tight labor market they are gaining the confidence to do something about it,” says Harley Shaiken, a University of California, Berkeley, professor who studies labor. The number of workers voluntarily quitting their jobs is at its highest level in decades. “Fire me, and I’ll find another job somewhere else,” says Tracy Pease, a -Detroit-area waitress who recently testified in front of the Michigan statehouse advocating for a higher tipped minimum wage.

Many nonunion workers also want change. Those in the gig economy, many of whom are considered- independent contractors and thus not eligible to unionize or receive benefits, have been demanding higher pay and steadier hours. “The economy is going back up for people that are buying the $72 million homes, it’s not going back up for people like me,” says Mia Kelly, a former Instacart driver who now helps organize protests through a campaign called PayUp. Kelly and other gig workers handed out peanuts at Postmates’ Bellevue, Wash., offices earlier in September to protest declining pay; some have also testified before lawmakers. Legislators have paid attention: on Sept. 11, California passed a landmark bill that could make it harder for companies like Postmates to classify workers as independent contractors.

While the GM walkout and similar large-scale strikes are getting plenty of attention, only 10.5% of the country’s workforce was unionized as of last year, an all-time low. That’s in part because a strong economy can inhibit unionization. Gary Chaison, a professor emeritus of labor relations at Clark University, says workers who are doing better than they were a few years ago are often skeptical that unions will do any good. But Chaison argues those are often the same workers who could most benefit from the safety net that unions can offer if and when the economy starts to sour. That may happen sooner than later. In August, the stock market plunged after the yield curve, a closely watched economic indicator that has predicted past recessions, hinted at an upcoming downturn, spooking investors into a sell-off. “That’s the irony of the situation—as things become worse, there’s more of a need for collectivism,” says Chaison. 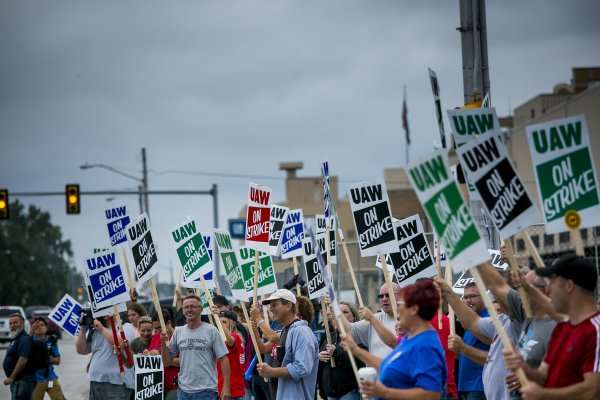 The GM Strike Is Also a Protest Against the Gig Economy
Next Up: Editor's Pick