L.G.B.T. activists and their supporters rally in support of transgender people on the steps of New York City Hall, October 24, 2018 in New York City.
Drew Angerer—Getty Images
By Suyin Haynes

Merriam-Webster announced Tuesday that gender-neutral pronouns “they” and “themself” have been added to the dictionary, along with more than 530 other words.

Added to “address the complex ways we view ourselves and others,” the word “they” is “used to refer to a single person whose gender identity is nonbinary,” meaning that they do necessarily not identify with the binary language of male or female. Nonbinary and gender nonconforming people have existed throughout history and across cultures, but as Merriam-Webster noted, “we’ve struggled to find the right language to describe these people — and in particular, the right pronouns.”

The use of “they/them” has gained greater visibility in recent years as a pronoun. “‘They’ is interesting, it’s of course ancient and has been around since the 14th century. The new thing is that some people are choosing to refer to themselves as ‘they’ not just in a singular way, but in a non-binary or non-gender specific way,” Peter Sokolowski, an editor-at-large at Merriam-Webster, tells TIME.

Sokolowski points to an example of “they.”

“‘Everyone knew where they stand.’ That use is so unremarkable that it paves the way to the next step, where if we’re not counting number, now we can not count gender,” he says. “Because its use as a pronoun has become so frequent and so public, it’s simply time for it to go into the dictionary.”

The criteria is always the same for adding new words to Merriam-Webster’s dictionary: “if a word is frequently used and likely to be encountered, then it goes in,” says Sokolowski. He also likens the change in language to the changes in the 16th century, when “you” replaced “thee” and “thou” as it became a more polite form of addressing people. “There’s an interesting part to this that shows that social forces change language, and we are part of monitoring that change.”

In 2016, writer-producer and LGBTQ advocate Jacob Tobia wrote about gender-neutral pronouns for TIME, saying that “the pronouns “he” and “she” come with a certain set of expectations about how someone should express their identity and relate to the world.” The following year, Tobia was one of several young people in the U.S. profiled in a TIME cover story who identified as gender fluid, with some saying they preferred using the pronoun “they.” Pose star Indya Moore, Orange Is the New Black actor Asia Kate Dillon and The Hunger Games actor Amandla Stenberg have all said that they identify with “they/them” pronouns, as did British singer Sam Smith over the weekend.

Several words and phrases about race and identity are among the hundreds of new words that Merriam-Webster has added, including inclusive, colorism, and Bechdel test. “The important point for these new words is that revision is our job, and updating the dictionary is just keeping up with the language,” says Sokolowski. “We don’t invent these terms, we’re trying to record them, and record them responsibly with lots of evidence. Some people are surprised and think these are innovations, but in lots of instances, we’re recording changes in language that have already taken place.” 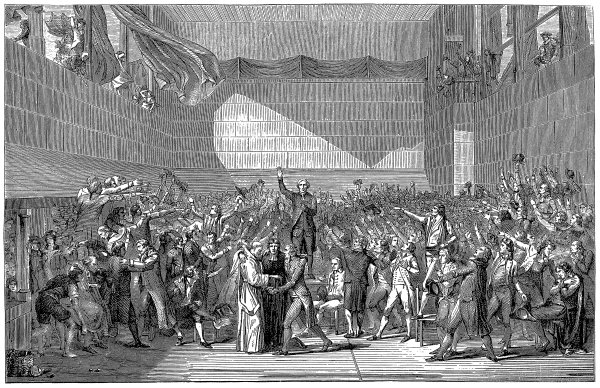 What to Know About the Origins of 'Left' and 'Right' in Politics, From the French Revolution to the 2020 Presidential Race
Next Up: Editor's Pick