'I Will Not Allow That to Be Your Life.' A Mother's Letter to Her Black Sons on Growing Up in America

Code Pink for Peace and Mothers Against Police Brutality organize a protest outside the Justice Department, joining mothers whose unarmed sons where killed by police and other demonstrators in Washington, D.C. on Dec. 10, 2014.
Chip Somodevilla—Getty Images
Ideas
By Imani Perry
Imani Perry is the Hughes Rogers Professor of African American Studies at Princeton University and the author of Breathe: A Letter to My Sons.

In Breathe, Imani Perry, a professor of African American Studies at Princeton University, writes a letter to her sons Freeman and Issa about the challenges they will face growing up as black men in America.

You were both little bits when President Obama was elected. That night was jubilant. We celebrated with friends, then, on the ride home, black people cheered and danced in the streets. It reminded me of the night when Harold Washington won as mayor of Chicago, and strangers hugged my father and me. Such joy. It was a palate cleanser, for a fragment of a moment. A season in which pundits speculated we might be post-racial, in which scholars speculated that black children would be less wounded; they called it a turning point, a point of no return. When Obama won, for a time black tongues were scraped of bitterness and bile. Then the aftertaste came back like an earthquake.

Troy Davis. He was the first whose name you knew. Before either of you were born, he witnessed a fight. A cop tried to break it up and was shot. And died. Troy Davis saw everything, but he insisted he wasn’t the shooter. Someone else said he was.

The police were looking for Davis and so he turned himself in. Someone still said he did it, and there was a trial, and Davis was convicted. This was Georgia, a death penalty state. And Troy Davis was sentenced to death. His appeals for habeas relief — the potential grace note for unjust and unlawful detention — was denied.

Troy Davis became a household name because there were so many holes in his case. Seven witnesses recanted their (apparently coerced) testimonies. Eyewitnesses said it was his accuser and not Davis who did the shooting. The evidence of fabrication grew, and so did attention to Davis’s plight. Archbishop Desmond Tutu and Pope Benedict both insisted on a halt to the killing machine. Former presidents and parliaments, even Republicans, implored. This man was innocent, and that fact was clear irrespective of what the court’s procedures would recognize.

We went to demonstrations. We talked about the case. We joined the chorus pleading for Troy Davis’s life. In the same way I was taught, I was teaching you how to think about injustice from an early age. No one understands fairness as much as young children. If you explain the way the world works, its pernicious efficacy, you will create justice warriors for a lifetime. They know what is right and wrong.

We sat together, me and you, Freeman, on that pretty pale-yellow denim couch. It wasn’t stained yet from juice boxes and pizza. The night was Sept. 21, 2011. You were up way past your bedtime. The news cameras covered the crowd outside the prison. The journalists told us what was happening inside, in that echoing lonely quiet. Troy Davis died at 11:08 p.m.

You looked at me, wide-eyed. “They killed him?”

They killed him. They. America. It. And whenever we forget and say the word we, it slices deep into our flesh. “Remember, n—. Remember your place,” is the national coda. I cried. You nestled in my arms. My poor child. You know intuitively that there are far more Troy Davises than Obamas.

More protest; that was my first answer. That was what I knew to do. When I was a child and was prohibited from celebrating the Fourth of July (because, as Frederick Douglass asked, “What to the Slave is the Fourth of July?” and what is Independence Day to the oppressed?), I asked for a demonstration instead. The first time I was in the newspaper it was under a sign that read, “Stop the War Against Black America.” I was much younger than five.

Something distinct has happened in your time. It is the product of camera phones, the diminishing whiteness of America, the backlash against a black presidency, the persistence of American racism, law-and-order policing. The epistrophe of our era: Hands up, don’t shoot, can’t breathe, can’t run, can’t play, can’t drive, can’t sleep, can’t lose your mind unless you are ready to lose your life, dead dead dead. We wail and cry, how many pietas? We protest their deaths; we protest for our lives.

Once our house alarm was tripped twice in one night. I tried to remain calm. But there was a loud banging sound at the back door the second time. The alarm company called again. I had said the police officers should not come the first time. I agreed the second time. You both were frightened. I was too. I called you, Freeman. Thank goodness you had a cell phone. I told you, softly, to lock your bedroom door and to not come out until I told you to. The first degree of fear, and I wonder at this, was not about the intruder who I thought was trying to get in. It was about the police, who I knew could get in, had a responsibility to get in, because they had been called.

I said lock your door, because the possibility flashed before my face. You might be tipping out of your room, looking to come upstairs to me, or, in your breathtaking and youthful courage, looking to protect the home. And what if the police officers saw you, mahogany in the shadows, tall and lean and dreadlocked, and decided you were the intruder, the one who didn’t belong in this big house with lilac bushes and manicured Japanese trees in front? And what if they took you out?

There are fingers itching to have a reason to cage or even slaughter you. My God, what hate for beauty this world breeds. They say they are afraid. I do not believe it is fear. It is bloodlust.

People will say I’m being melodramatic. They have. But police kill middle-class black children and adults, too. Not with the same frequency, but class is no prevention. It is a reduction of the odds at best. As a black mother, when I read about one of those children whose life has been snatched, at first blush I think, “That could have been my child.” But I have demanded of myself that I turn away from such egotism. The truth is that is not my child. My children are here, and they stand with me, to honor their dead.

When Mamie Till shared the bloated distended face of her beautiful son Emmett, who was murdered, she did not offer other black parents possession. Mamie Till’s pieta was one in which she could not hold his wounded but still beautiful body across her lap. Her personal tragedy became the public’s grief, one of so many during the freedom movement. Emmett’s abused face resonated. Yet still he was her baby and not the onlookers’. The same is true of the myriad who have followed. We witness private grief and feel it turn into our collective grief. But we must not snatch it up out of their loved ones’ hearts and colonize it with our fears. Instead we stand in the chorus of mourners. I am sorry, Mrs. Till, Mrs. Fulton, Mr. Martin, Mrs. Davis, I am sorry we did not protect your child with every fiber of our beings. I am sorry we go on doing the same as yesterday while you collect the shards. It is not enough, but we will try to prevent the next.

When I stopped watching the killings, and declared it, people argued with me. They insisted that public executions would turn the tide. They were wrong. They just ratified the truth: summary execution is a feature of American life. Awareness is not a virtue in and of itself, not without a moral imperative. I knew the imperative wasn’t there. I wanted to be wrong. But I wasn’t. And I won’t beat my chest, beat our minds to a bloody pulp, in order to keep trying to have faith in a place that doesn’t deserve it, in an American consciousness that hates more than it recognizes.

We cannot make of our lives a nightmarish Fortnite game with the guns cocked and ready for you as a target and our hands inexplicably empty of self-protection. Sons, I will not allow that to be your life. Your testimony is living with the passionate intensity of one whose presence matters despite the violence of this world.

Fairly soon, Issa, the protests became too much for you. You and your brother watched as we failed. We marched, we spoke out. We testified, we cried. And then there was another one, and another one. We lost, repeatedly. We watched conflagrations that burned into ashes and nothing was changed. The next day, or week, someone else was choked or shot in the back or stomped to death. Someone else encased in brown flesh like us. It was too much. No more marches; it made life too terrifying.

I had hoped that standing shoulder to shoulder with people of conscience, people who knew like us that the tocsin peal of black death is wrong, would help you feel powerful, a part of something. I may have been right, but it was never enough.

Excerpted from Breathe: A Letter to My Sons by Imani Perry. Copyright 2019. Excerpted with permission by Beacon Press. 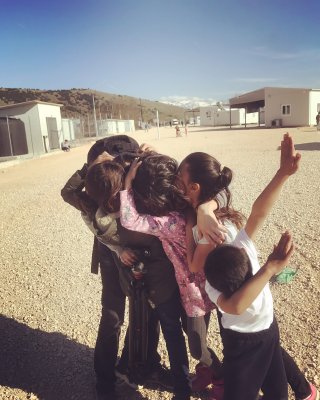 Waiting is a Boot on Your Neck: How Refugees Summon Joy and Why They Hide It From Us
Next Up: Editor's Pick