Although he took pains to avoid on-camera interviews and press briefings during his 23-month tenure as Defense Secretary, James Mattis has embraced the media circuit rounds to promote his new book Call Sign Chaos.

The book details lessons learned from more than 40 years in the Marines before his retirement in 2013, but says surprisingly little about his tumultuous time in the Trump Administration as Pentagon chief. Though the book does contain Mattis’ candid resignation letter criticizing the President’s treatment of allies and warming relations with China and Russia, the dearth of information on his time in the Administration has drawn fire from critics who say Mattis has a duty to let American voters know about his experiences and opinions. During an hour-long sit-down interview with TIME, Mattis said he has a “duty” to keep such internal matters on a sitting President to himself.

However, in the book, Mattis does criticize decisions made by the George W. Bush and Barack Obama Administrations and their implications on the battlefields where he commanded. From August 2010 until March 2014, his final years in uniform, Mattis headed U.S. Central Command and oversaw the wars in Iraq and Afghanistan as well as other military operations in the Middle East. Unmarried all his life, Mattis, 69, was known as a scholarly general who preferred being close to front-line combat, earning him the nicknames “Mad Dog” and “Warrior Monk.”

He left the Administration in December 2018 after President Donald Trump’s abrupt decision to pull out all 2,200 troops fighting ISIS in Syria. To Mattis, the pullout was abandoning a key ally, the Syrian Democratic Forces, a militia of mostly Kurdish and Arab fighters that was vital in the four-year-long war against ISIS. It marked the end of a nearly two year-long run as Defense Secretary, much of which was spent trying to thread the needle between implementing Trump’s policy objectives and maintaining long-standing American principles.

TIME: In the book you reference qualities in leaders that you respect. For instance, you say a person is illiterate if they haven’t read hundreds of books. You say the best leaders aren’t in it for money and fame. And I can’t help but think that we have a president who doesn’t share those views. Was that intentional?

Mattis: A couple of points: From 2013 to 2017, we basically write the book. But think of 2013, you know President Trump was not even considering running, so it has — again I understand that many of you are very caught up in the political ways of Washington and of the country, and I salute that. But it was written — and you’ll notice the direct audience is young leaders in business or in coaching or in school districts or on the military battlefield. So they understand the intersection of ethics and competence, of morality and military necessity. It was not written to juxtapose my leadership style against a President. That was never my point.

You’ve been criticized a fair amount for not talking about President Trump in the book. How do you feel about that?

Well, my response would be that when you leave an administration over a policy issue, when I write a letter to the President that is released to the press that basically sums up the policy issue, at that point when you walk out, you owe what the French call a devoir de reserve, “a duty of quiet.” And the reason is, the threats to the Western democracy, the democratic tradition haven’t gone away. Now the Constitution that I swore an oath to uphold when I went in as Secretary of Defense, the same one I swore when I was enlisted in the Marines at age 18.

Now I understand those who say, who want to see Mr. Trump out of office. O.K., in a democracy you can always do that. But when the election is over, after you’ve done dividing the country into different blocks in order to gain votes, then you go into governance. Governance isn’t about dividing. Governance is about unifying.

You do criticize the Obama Administration, though, particularly the decision to withdraw from Iraq. You also criticize former Vice President Joe Biden, the leading Democratic candidate for President. So how do you square that?

With the Obama Administration I talked about the policy. I don’t criticize President Obama politically, I criticize a policy decision that was taken in contravention of the advice of the intelligence community that said if we pull everyone out [of Iraq], if we back [former Iraqi Prime Minister Nouri] al-Malaki who did not, whose party did not have the majority of the votes, then we were going to end of having to go back in. And sure enough, that’s what happened. And the Vice President at that time [when we pulled out of Iraq] was Biden. Remember, the book came out, we finally got it done last April I think, I think the first of May was my deadline at that Random House laid on me. And we turned it in.

Where was Biden at that point as a nominee? I don’t even remember. And so I’m writing about history here. And I think that’s a legitimate policy and strategy point that an officer can make.

How do you feel about the peace negotiations taking place with the Taliban?

I know no more about these negotiations than you. What I’ve learned is that in any war political will is every bit as important as the troops on the battlefield, as the military activity.

There was no doubt after one of the World War II conferences that we were going to go for the unconditional surrender of Germany. It was going to be over. When we finished this, it would be over, we would occupy their ground.

What they had done was such a crime, what they were doing right then, concentration camps, occupying other territories, viciously, we were going to take them. And when Eisenhower landed at Normandy he said, “Now what did I come here for? It completely escapes me.” He’s going to Berlin, he’s going to kill Hitler. It’s that simple.

It sounds you think you believe the Administration’s will is nebulous.

Yeah, I can’t make the assessment. And if I had all the information, if I was still in government and I could make the assessment, I would, certainly to my boss. But right now anyone who talks about knowing what are the details is giving you more their impressions or their political vision than the reality of what’s going on. I just don’t know.

I want to shift gears a bit. When you look back at your tenure as Defense Secretary, why did you roll back the policy regarding transgender military service?

Well it’s an issue that’s right now in the courts and I have to be very careful about saying things that would then be taken into the courts when I’m no longer in a responsible position. It was not a roll back; it was a study.

It was absolutely a study because when I came in and I asked the Joint Chiefs to bring up their concerns about anything that I needed to work on. These are the decisions that are pending and one of the points was where to start bringing in transgender [service members] to our basic training. And we’re not ready. I said, “What do you mean you’re not ready? Do you have any guidance on what the expectations are? Well, where was your input?” They said we didn’t have input. I put together a study group that was composed of everything from combat veterans to medical officers and others.

I am not going to lose any military efficiency or effectiveness. And that’s why I called for a study. And then I just need to leave it there because it’s in courts right now and I shouldn’t be addressing things when I’m no longer privy to the ongoing discussions or where the policy is at.

Since you’ve left the Defense Department, the Administration has tapped into $6.1 billion in Pentagon funding to build the border wall. Given that you’ve consistently maintain that the military should stay out of politics on this book tour, do you have reservations about money being funneled into this entire process?

I think I’m paraphrasing Einstein who said, “I’d spend 55 minutes defining the problem, and five minutes coming up with a solution.” Now think of that. Have we defined the problem well enough between the governors and the President, the executive branch and the legislative branch that we all agree on what is the problem?

And so I’m not going to comment on the specifics of this issue, again, I don’t believe I should be getting into political discussions, having been in the military and the Secretary of Defense. But if we don’t spend more time agreeing on what is the specific problem we’re trying to solve, I found in my time in leadership positions then the solution never satisfies people because they never agreed on what the problem was.

Why did you include your resignation letter as Defense Secretary in the book?

I thought that the publisher made a good point. You can’t simply put the book out at this point in time as if the last two years didn’t happen. It was never written to be a political book.

Banish the thought. I think I’ve done with four and a half decades of service I think I’ve done about what I can do. I’m more than willing to talk to young people, I hope to continue lecturing at colleges and talking with young people and encouraging them to recognize the nobility, but also the privilege of serving. 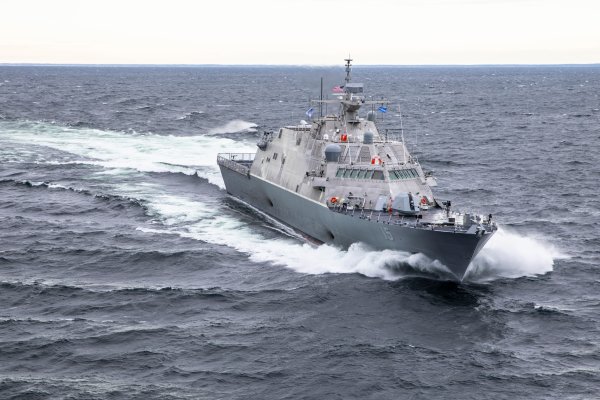 U.S. Navy Sends 6 Ships Out to Sea to Ride Out Hurricane Dorian
Next Up: Editor's Pick