Election campaign billboard of Chairman of Qalb Tounes Party and detainee Nabil Karoui is seen ahead of the presidential elections in Tunis, Tunisia on Sept. 13, 2019
Anadolu Agency via Getty Images
By Rachael Bunyan

Tunisians head to the polls on Sunday in national elections that will decide the next president, in a major test for the nascent democracy.

The death of secularist President Beji Caïd Essebsi, 92, in July forced the presidential elections to be held earlier than originally scheduled.

Tunisia, the only democracy to emerge from the 2011 Arab Spring, is plagued by economic stagnation, security threats, and political instability – all key themes of the candidates’ campaigns.

There are 26 candidates vying for the position, including two women, a current prime minister, a defense minister and a former president. Although the race is still wide open the pollsters’ favorite is Nabil Karoubi, a media mogul who is currently campaigning to be president from behind bars. The secular candidate was sent to jail on charges of tax evasion and money laundering.

When does voting begin in Tunisia?

Tunisians will head to the polls on Sunday, Sept. 15. Over seven million are registered to vote – an increase of nearly two and a half million since the May 2018 local elections.

Voters will be selecting their second democratically elected president from 26 candidates. A second-round vote could be held in November if no candidate secures an absolute majority. This is likely, given the high number of candidates this year.

Who is top of the polls?

Nabil Karoui, a media mogul, is one of the most noteworthy secularist candidates for the presidency. Karoui, who owns Nesma, a private TV station critical of the government, was imprisoned on charges of tax evasion and money laundering in August. He denies the charges, and is appealing. On Wednesday, he started a hunger strike demanding to be allowed to vote in the presidential elections this week, media reports say.

The 56-year-old is only able to continue his bid for the presidency because his charges do not explicitly disallow him from running. However, if he’s found guilty and wins the presidency, he wouldn’t be allowed to take up the position.

Recent polls suggested the founder of the Qalb Tounes (“Head of Tunisia”) party has a narrow lead over his rivals. His lead has grown while he is behind bars.

Who are the establishment candidates?

As the current Prime Minister of Tunisia, Yousef Chahed is the candidate who represents the most direct continuation of the incumbent government’s policies. He led early opinion polls, but has dropped off as the race draws to an end.

His candidacy will likely be a referendum on his record during his premiership, including his efforts to promote national security following deadly terrorist attacks and his controversial promotion of reforms by the IMF that have antagonised labour unions and the public.

The other establishment candidate is Abdelkarim Zbidi, the former defense minister. The 69-year-old is a popular candidate, garnering support from several secular parties. Upon declaring his candidacy, Mr Zbidi has indicated that he would be the “President of all Tunisians”, suggesting a willingness to work with Islamists in contrast to other candidates who have adopted a stricter anti-Islamist stance.

Is there an Islamist candidate?

Abdelfattah Mourou is the choice of Ennahda, an Islamist Party. Mourou, the party’s vice president, has been described by analysts as a moderate political figure, seeking to promote a more liberal understanding of Islam in politics. The 71-year-old has previously expressed support for a Muslim woman’s right to marry a non-Muslim man.

What are the major issues at stake in the Tunisian election?

The economy is likely to be foremost in voters’ minds. There is a 15% unemployment rate – the rate can be as high as 30% in some regions – whilst one-third of university graduates are jobless. Security will also be an issue; terrorist attacks over the last few years at popular tourist sites have been a factor in the economy’s underperformance, as a sharp decline in the number of visitors has impacted a vital sector of the economy. Tunisia has been under a state of emergency since a series of major terrorist attacks in 2015.

But many Tunisians are also fed up of their government.The state of the economy has contributed to regular protests and public apathy is high – voter turnout at the polls has decreased. Despite progress since the transition towards democratic status, voters believe that the government has largely failed to usher in the economic reforms at the heart of the 2011 uprising – two-thirds of Tunisians say that the government does little or nothing to address their needs.

Why is Tunisia’s election historic?

The election to choose the country’s second ever president will be a key test of the newly democratic state.

There have been several firsts already. Tunisia held its first televised debate for the presidential candidates last week, and it’s the first year Ennahda has nominated a presidential candidate. And for the first time, an openly gay person stood for highest office in the Middle East and North Africa, a region that remains intolerant of LGBT rights. Mounir Baatour’s candidacy was short-lived—Tunisia’s high court blocked his bid for the presidency without giving a clear reason—but remains symbolic.

Finally, it’s the first time a Tunisian presidential election will take place before parliamentary elections, which take place on Oct.6. The shortened campaign period has left little time for candidates to educate voters on the policies and differences between them. 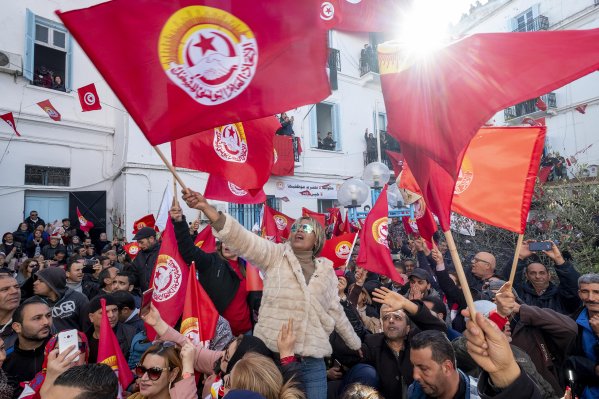 Tunisia’s Fledgling Democracy Shows Signs of Wear and Tear
Next Up: Editor's Pick