The Old City is seen from the Mount of Olives on January 13, 2017 in Jerusalem, Israel.
Chris McGrath—Getty Images
By Dalia Hatuqa / Ramallah, West Bank

On a chilly April evening, several elderly Palestinian men sat in a smoke-filled downtown Ramallah cafe watching the news. The anchor on the enormous flat-screen mounted on the wall read election results that would affect their lives in every way imaginable. The tally was not from Palestinian polls, which haven’t been held in 14 years, but next door, in Israel.

As the days went on, Palestinians saw how much Israeli Prime Minister Benjamin Netanyahu was willing to secure an electoral victory, including vowing to annex West Bank settlements. They watched as Netanyahu, Israel’s longest-serving prime minister, made compromises with the most fringe elements of the Israeli far-right to draw votes from his competitors. Though Netanyahu had won the elections, he failed to form a coalition, spurring a do-over that has left him more politically exposed than he has been in over a decade. And with that, he has gone even further to secure another victory in the next elections on Sept. 17: On Tuesday, he announced plans to annex the Jordan Valley, a large and important part of the West Bank, if his party wins.

“This has gone far beyond lip-service and vows, it’s now just contingent upon finding the right place and the right time for Israel to annex parts of the West Bank,” says Ghassan Zaqtan, a renowned Palestinian writer and poet based in Ramallah. “Netanyahu will not hesitate to do anything — and that includes annexing West Bank settlements — to stay prime minister.”

Zaqtan, and others like him in the West Bank and Gaza, say they have grown used to watching Israeli politicians use them as political pawns. And so, despondency has become a mainstay of Palestinian life. Since the Oslo Accords were signed in the 1990s, Palestinians have placed their bets on successive American administrations, hoping that despite all odds, the U.S. will deliver them a state of their own.

But hearing Netanyahu make promises to formally exercise authority over the West Bank has pushed the already-waning dream of a two-state solution even further away. Palestinians watched in anger over the last two years as the dominoes fell one by one: First, in December 2017, Trump recognized the holy city of Jerusalem as Israel’s capital; then in March, he recognized Israeli sovereignty over the Golan Heights (Syrian territory, considered occupied by Israel under international law), a badly needed boost for Netanyahu as he faced unprecedented election competition. And on Tuesday, Netanyahu confirmed that the annexation of West Bank settlements required “maximum coordination” with Washington. Whether Washington will endorse this move remains to be seen; the Trump Administration is expected to unveil its much-vaunted plan for Israeli-Palestinian peace after the Israeli elections on Sept. 17.

But Zaqtan thinks an endorsement is likely. “The Trump administration has gone beyond supporting the decisions of the right-wing government in Israel to pave the way for annexation,” he says. “It has given a continuous green light for everything it has done so far.”

U.S. President Donald Trump waves next to U.S. Vice President Mike Pence, left, after making a statement on Jerusalem in the Diplomatic Room of the White House in Washington, D.C., U.S., on Wednesday, Dec. 6, 2017.
Andrew Harrer/Bloomberg via Getty Images

Annexation in the West Bank has been occurring on the ground for decades. Starting in and around Jerusalem after the 1967 war, the settlement enterprise soon expanded into the West Bank proper, with an especially large push using “outposts” — settlements built without government permission — during the Oslo years (1993-97) under Shimon Peres’ and Yitzak Rabin’s premierships. But in the years since, the aggressive push in East Jerusalem, along with retroactive legalization of outposts, accelerated settlement construction, and the destruction of Palestinian homes, all indicate that annexation is a primary policy within Israel’s government and has indeed become the new norm.

“Annexation has been de facto the case for a long time, some might argue from the beginning of the occupation, but certainly since the Second Intifada [2000-2005],” said Tareq Baconi, a Ramallah-based analyst with the International Crisis Group. “But this process of creeping annexation has been gathering pace under Netanyahu’s government as officials push for formal annexation and have begun introducing bills to the Knesset in that direction.”

The signs so far from the Trump Administration have led some Palestinians to believe U.S. support is inevitable for Israel to formally annex Area C of the West Bank, where most Israeli settlements lie. This is roughly 60% of the West Bank’s land, and leaves Palestinian cities cut off from one another. The situation, which makes it virtually impossible to squeeze a viable Palestinian state into the areas that remain, once shocked former senior Obama White House officials, including the president himself, when they were shown accurate maps of Palestinian population centers in the West Bank.

“It means less space to navigate, less places to breathe. It’s taking what’s already fractured and ruptured and downsizing it further,” says Mariam Barghouti, a Palestinian-American writer living in Ramallah. In 2014, Israeli authorities charged her with throwing stones and entering a closed military zone during a protest, charges stridently denied by Barghouti, who was a student at the time. She was detained for a week.

“Annexation means more places that Palestinians can’t reach, it means more detours, and divisions. It’s not just taking more land, it’s a theft of our time,” Barghouti continues, “because we need to calculate the time it takes to cross checkpoints, it’s accessibility to resources, it’s settler-colonialism and it’s about time to call these annexations exactly that.”

Given the Trump Administration’s apparent support for Netanyahu’s strategies so far, Palestinians now fear that Israel will push them into a quasi-state comprised of Gaza and possibly some parallel land swaps, or isolated plots of West Bank land, surrounded by Israeli settlements. Jerusalem isn’t even on the table.

“Israel wants the land, just not the people,” says Diana Buttu, a lawyer and former legal advisor to the Palestinian negotiating team during peace talks with Israel. “Is the U.S. leading the way for this annexation? Absolutely.”

Buttu says that a state without a third of the West Bank will not be one that’s free or prosperous, adding that American attempts to support such a state economically would not address these problems. “Not only are they talking about a quasi state; it is one that is contingent upon the Palestinians behaving. That’s the alarming part,” she told me. “That’s what the ‘Peace to Prosperity’ conference is all about: to entice Palestinians and tell them all ‘this can be yours if the price is right’. We’re no longer even talking about rights – the plan used to be ‘land for peace’, now it’s just ‘economy for peace’ without any real political rights.”

This picture taken on September 12, 2019 shows a general view of a central area of the Jordan Valley.
JAAFAR ASHTIYEH—AFP/Getty Images

For decades, international law has maintained that territory seized in war must be returned. But after Trump’s decision to recognize Israel’s sovereignty over the Golan Heights, Netanyahu asserted: “Everyone says you can’t hold an occupied territory, but this proves you can. If occupied in a defensive war, then it’s ours.” His remarks were widely seen as a reflection on how his new government would approach the West bank too. Even if Netanyahu is only rhetorically committed to annexing part of the West Bank, if he wins his extreme right-wing coalition running mates could ramp up the push if they enter government posts.

That rhetoric was on full display in July, at an event in the West Bank settlement of Revava, marking the 40th anniversary of the Samaria regional council (a governing body of settlements in the northern West Bank) when Netanyahu urged attendees to “look at what we did in the Golan Heights and East Jerusalem. To be continued,” he said, referring to the other territories captured in the Six-Day War and later effectively annexed by Israel.

So far almost every member of Netanyahu’s Likud party seeking re-election has publicly endorsed some form of West Bank annexation. A Haaretz poll published in March found that 42% of Israeli voters support annexation of some portion of the West Bank, raising fears among Palestinians that life is about to become even more difficult.

Palestinians like Barghouti say the lack of movement toward solving the conflict, coupled with the Israeli parliament’s deliberations on annexing parts of the West Bank, is particularly dangerous because it could mean Israel gains land—but with a population it does not want, paving the way for a formal Apartheid situation where a minority rules over the ethnic majority of a state. “It’s racial apartheid concealing itself behind democracy,” says Barghouti. “Israel is already in control [of the West Bank]; all that is happening is it’s attempting to legitimize this oppressive system by a slow and gradual annexation.”

Yet Palestinians are aware that none of the Israeli parties running in September’s elections are offering a vastly different reality for them. Netanyahu has never been supportive of a sovereign Palestinian state, repeatedly stating that the Jordan Valley would always be kept under Israeli military control under any future arrangement, leaving the Palestinians a disjointed patchwork of enclaves to call home.

At the West Bank settler regional council meeting in July, Netanyahu outlined his West Bank strategy, laying out his guiding principles: “The first – this is our homeland. The second – we will continue to build and develop it. Third – not one resident [settler] or community [settlement] will be uprooted in a political agreement. Fourth – the Israeli military and security forces will continue to rule the entire territory, up to the Jordan Valley. Fifth – I am working to get international ratification of these principles.”

The Trump Administration, meanwhile, seems to be toeing a similar line. In June, the U.S. ambassador to Israel, David Friedman, said in comments to the New York Times that Israel had a right to annex at least part of the West Bank.

“Friedman’s comments to the newspaper were not off the cuff remarks,” Buttu, the lawyer, says. “Since then, there has been no back-pedaling. Not just from the White House or State Department; I haven’t heard any of the [U.S.] presidential candidates forcefully come out and say ‘If Israel does this, we’re gonna hold it accountable.’ At best, you have people saying, ‘we need to re-evaluate the amount of aid we give Israel.’”

Without external pressure, Israel doesn’t look likely to hand over the West Bank any time soon. Palestinian security forces work hand-in-hand with the Israeli military on a daily basis, in an unpopular practice known as security coordination; it manages to keep a lid on widespread unrest. Meanwhile, Israel has a standard of living on par with Europe, and a busy private sector within the tourism, tech, medical and agricultural industries. Should annexation formally be made, analysts do not expect Israel to face any backlash — since there’s effectively little resistance to its plans right now.

“The debate unfolding within Israel now is not whether annexation has happened or not, but rather whether to formalize it or not,” Baconi of the International Crisis Group explains. “It’s not clear what the benefit for Israel is. Why annex if you have all the benefits of annexation without any of the backlash? De facto is sufficient, [so] why de jure? If annexation does happen, however, I still do not expect any effective international response, beyond fleeting condemnation.” 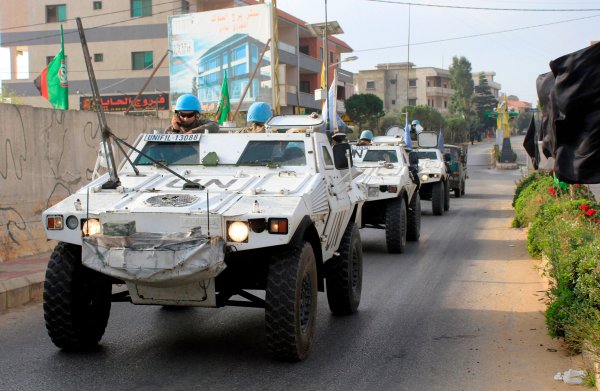 Israel Is Escalating Its Shadow War With Iran. Here's What to Know
Next Up: Editor's Pick