'We Are Breathing a Sigh of Relief.' Here's Why 'Alienstock' As We Know It Will No Longer Be Held Near Area 51

Alienstock, the alien-themed music festival that originated from a viral joke and was all set to invade a somewhat ill-equipped small town, has experienced a bit of a shake-up.

Matty Roberts, the 21-year-old from Bakersfield, Calif., who started the satirical Facebook event, “Storm Area 51, They Can’t Stop All of Us” on June 27, won’t be in Rachel, Nevada, for the festival on Sept. 19.

The small town of Rachel has been bracing for a rush of visitors ever since Roberts created the event, which jokingly encouraged people to “storm” the secretive military base that has for decades been the fodder of conspiracy theorists who believe there is proof of extraterrestrial life there. Two million people have said they are “attending” on Facebook. Even contenders for the Democratic presidential nomination Bernie Sanders and Andrew Yang have committed to further investigation in response to the renewed viral tidal wave of interest in Area 51’s business.

Residents of Rachel, which is 27 miles north of the base and widely considered the real place to visit Area 51, took matters into their own hands. Some worked with Roberts and his own team to coordinate and plan the Sept. 19 to Sept. 22 festival that got people looking forward to the gathering.

But now, Roberts himself has pulled out of the festival. Instead, he’ll headline the “Area 51 Celebration,” a one-night concert and party at the Downtown Las Vegas Events Center. Sponsored by Bud Light, that event was already underway before Roberts reached out over the weekend asking to join forces. He’ll be signing autographs at the alien-themed event, inspired by the popular conspiracy theories that have captured the imagination.

“There were a lot of red flags that popped out as far as business goes,” Roberts tells TIME of his decision to leave the original festival after thousands had expressed interest in attending. He says the decision was made after a dispute over security, sanitation, medical personnel and insurance permits.

As Roberts and his team prepare for the Las Vegas party, some residents of the original setting in Rachel, the remote desert town — which has approximately 50 full-time residents — are thrilled. “Frankly, we are breathing a sigh of relief,” says Joerg Arnu, who has lived in Rachel since 2003 and previously told TIME that he was against Alienstock. “It feels like mission accomplished.” Arnu’s mission included encouraging the county’s Board of Commissioners not to issue a permit for the event and to shut down State Route 375, nicknamed the Extraterrestrial Highway, from Sept. 19 to Sept. 22, the festival’s scheduled dates.

But the board did issue a permit to the event’s organizers — a coalition led by Roberts himself, along with 20-year-old Brock Daily and Connie West, the owner of the only business in town, the Little A’Le’Inn — and declined to close down the highway. Weeks later, with Roberts out of the picture, it’s unclear what’s going to happen in Rachel, nearly 150 miles from the new event in Las Vegas. Arnu, who also runs the town’s website, and his friend Bob Clabaugh, a retired pilot who lives half a mile away, only learned about the festival’s supposed cancelation when news organizations began reporting on it.

West was unavailable for an interview at press time, but she told TIME in an email that the festival was still happening, despite the split with Roberts. West also told the Las Vegas Review-Journal on Monday she found out that Roberts, Daily and their team were out.

“I’ve paid it out of my pocket anyway because nobody had any money,” West said of her planning for Alienstock. “It’s still going full blast. I’ve got a $17,500 down payment to security, and half of that is nonrefundable.”

West wasn’t the only resident of Rachel who was contributing. “We’ve spent a lot of time, energy and money,” to protect private property in Rachel, says Arnu. For him, that money meant spending $1,100 on stadium-level lighting and signage to illuminate and further protect his property.

While residents of Rachel have been busy securing their own properties, Arnu says that on Sunday, less than two weeks from the big day, there were no stages built for Alienstock and there appeared to be little preparation underway. And Clabaugh told TIME on Wednesday that there were still no fences or stages built, but that the event’s area had been smoothed over in preparation.

The site of Alienstock in Rachel, Nevada, on Wednesday, Sept. 11.
Robert Clabaugh

As Roberts tells it, he didn’t leave Alienstock — he took it with him. “Alienstock will be moving to a safe, clean secure area in Downtown Las Vegas as an alternative,” he said in his official statement. “We will no longer offer our logo, social media, website or Matty Roberts likeness or scheduled appearance.”

When asked about why the money donated to Alienstock on their website couldn’t be used for security — as actually confirming and paying for a security had been one of their biggest issues — Roberts and Frank DiMaggio, a consultant who says he has years of experience producing festivals in Nevada, said that money was given back. “Anything that came in as a donation got refunded through PayPal,” DiMaggio says. “These kids never wanted to earn money from this.”

Regardless, DiMaggio says that Roberts himself is the main talent and promoter of the festival, and that he shouldn’t have been responsible for planning Alienstock, despite his past commitment.

“We’re not trying to keep people from going out there, but we’re certainly not going to suggest that they do,” DiMaggio says.

As West continues her efforts to plan the festival — music acts included Wily Savage, The Weird Kids, Daylight Sinners and Madison Deaver will be playing shows in Rachel — Arnu says that the event becoming lower-profile might be the best possible outcome. “I think it’s a blessing in disguise for them,” he says. “This makes it more manageable for [West].”

And there is one good thing that came from it all: more business for Rachel. While he usually passes only one or two cars while driving 20 or 30 miles out of Rachel, Arnu says he now sees 40, 50 or 60 vehicles. “This is a blessing for the businesses,” he says. “Everybody is making tons of money.” 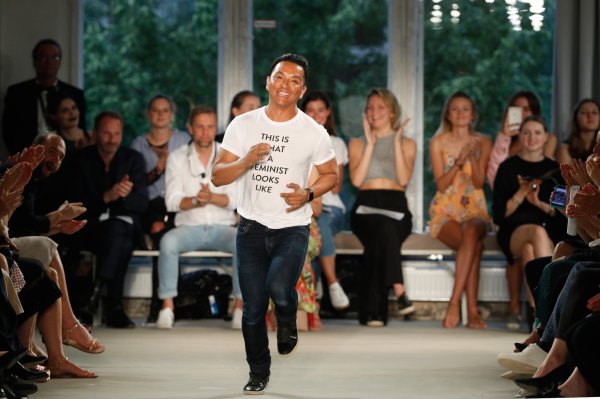 Someone Told Fashion Designer Prabal Gurung 'You Don't Look American.' His Response? A Runway Reckoning
Next Up: Editor's Pick