It’s a rare fashion show that can bring together luminaries from the fields of sports, technology, entertainment, activism and high fashion — and do so naturally. But Serena Williams isn’t an average designer. For the tennis superstar, who finished as the runner-up in the U.S. Open just days before, the usual rules don’t apply. Williams’s Tuesday afternoon debut runway show for her line S by Serena brought out everyone from Kim Kardashian West to Anna Wintour to Tarana Burke.

Before the show began, a hundred-odd brightly-dressed guests milled around the cavernous white warehouse space in midtown Manhattan, filled with lucite stools, orchid decorations and goodie bags stuffed with sneakers, water bottles and hot-pink fanny packs — the usual swag, heavy on the branding and sponsored by — as signs everywhere read — payments system Klarna. Over the dulcet tones of Megan Thee Stallion‘s “Hot Girl Summer,” people began to take their assigned seats. At the front of the runway, a video of Williams played on loop. The sides of the runway were plastered with adjectives: “spectacular,” “smart,” “sassy,” “swag,” “strong.” And one directive: “Be seen, be heard.” Williams has doubled down on her status as a player who insists on the connection between femininity and power; that’s abundantly clear in her line’s branding, too.

Then a crush of photographers converged as reality star and beauty mogul Kardashian West arrived, showing off a sleek new bob. She was invisible in the three-deep throng until she finally took her front-row seat. A few minutes later, a similar rush kicked off, this time for Wintour, editor-in-chief of Vogue. She took her seat at Kardashian’s left hand in her signature dark sunglasses, flanked by Orange Is the New Black actress Dascha Polanco. When the paparazzi parted, TV personality Lala Anthony was found poised on Kardashian’s right, next to Libyan-American activist and model Noor Tagouri. Two chairs down: a glowing and pregnant model Ashley Graham.

Across the runway, CBS anchor Gayle King perched on a stool. Partially hidden behind a pillar next to King stood Alexis Ohanian, Williams’s husband and the co-founder of Reddit. Even though he was tucked in the third row, his six-foot-five stature gave him away. Not far away you could spot Tarana Burke, the activist known for founding the #MeToo movement, as well as tennis star Caroline Wozniacki and Malaysian singer-songwriter Yuna. Then the lights dimmed, Ciara’s “Level Up” came on, and Anthony began to bop her head along to the music as the first models strutted out.

Ostensibly, this cadre of notable names across industries — and the packed crowd of guests and fashion editors — were all there to see the clothes: sporty-meets-dressy jumpsuits in shiny silks, flirty neon wrap dresses, sequined cocktail gowns and work-ready plaid suit separates, priced from $59 – $229 and modeled by women of different body types, skin tones and hair styles.

But even more than the clothes, the celebrities were there to support an athlete and global icon who intends to stand for much more than fashion. “This collection is a celebration for those who break limits, boundaries and tradition,” explained Williams in a pre-show statement. “This is designed for people who turn fear into courage and doubt into confidence — from indomitable mothers, daughters, and sisters to resilient business owners and entrepreneurs, young girls with crazy dreams, and women of color who show no fear in the face of adversity or challenge.”

Certainly, the mood was celebratory: even Wintour, known for her poker face at shows, cracked a smile. Within thirty minutes it was over. Williams herself popped out for less than 10 seconds to wild applause, her daughter on her hip. Just as quickly, the crowd began to disperse, iridescent goodie bags in tow and social media apps lighting up with new Instagram snaps of the fashion — and that powerhouse front row. 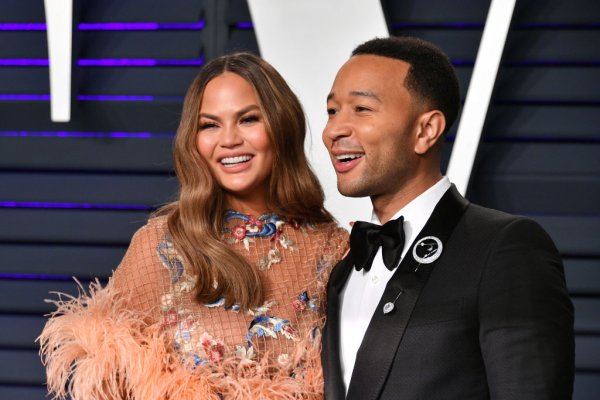 Chrissy Teigen Snaps Back at Donald Trump's Twitter Insult
Next Up: Editor's Pick