Rihanna Knows How to Throw a Party. One Successful Night at Her Diamond Ball Is Proof

The ladies’ bathroom at Cipriani Wall Street in downtown Manhattan is a palatial marble space. But the stalls are small. Rihanna, in a black velvet gown with a dramatic trumpet-flared hem that stuck out several feet, didn’t seem bothered by the constraints. The singer, fashion and beauty mogul and philanthropist was hosting her Fifth Annual Diamond Ball in the venue, and she knew just what to do with her unwieldy skirt in those bathroom stalls. When asked how she fit, she had a quick answer: “Like this — like an upside-down umbrella, sis,” she demonstrated helpfully to TIME, flipping her dress up, before waltzing out to share a meeting of the minds with Kehlani and Megan Thee Stallion.

It may be just another night in the life for Rihanna. But for the 600-odd guests at the Diamond Ball supporting her Clara Lionel Foundation, it was a verified starry evening featuring host Seth Meyers and performers including Pharrell Williams, DJ Khaled, Fat Joe, G-Eazy, Megan Thee Stallion, A$AP Ferg, Fabolous, Yo Gotti, and even Rihanna herself, coming in for a first-ever live performance of the song “Lemon” — to the surprise and delight of everyone assembled. (Even at her extravagant Savage X Fenty fashion show earlier in the week, Rihanna declined to sing, preferring just to dance. And after a three-years-and-counting wait for her next album, the fans are hungry.)

The goal of the night: raising money for the Clara Lionel Foundation, her charitable organization named after her grandparents, which focuses on providing support to global girls’ education programs and humanitarian aid programs in her native Caribbean, with a heavy focus on climate change resiliency. The method of fundraising: a hefty entrance price tag and a live auction. Guests bid on an all-expenses-paid trip to see Serena Williams compete in her next Grand Slam shot ($60,000); a limited-edition 60-lb. coffee table book of exclusive Rihanna photos and custom 2,000-lb. sculpted marble pedestal ($111,0000, to a Cardi B who outbid herself); and a trip to Barbados featuring dinner with the Prime Minister and a submarine trip, among other perks ($275,000, twice). Live donations were matched by Twitter co-founder and former party attendee Jack Dorsey (racking up over half a million from the crowd in the room). Ultimately, they raised over $5 million in total.

It got off to a slow start: guests started filling up the cavernous venue, which was lit up with hot pink, turquoise and yellow floral light projections, lime-green tablecloths and real, lush blooms bordering the giant (open) bar, well before 8:00 p.m. But it wasn’t until half past nine that dinner (baked tagliardi bolognese, beef or fish with potato dauphinoise, chocolate cake) was served. But there was plenty to do during the delay: at a Fenty Beauty booth, guests — like models Karlie Kloss, Shanina Shaik and Slick Woods, or rappers A$AP Rocky, Meek Mill, 21 Savage and 2 Chainz (it was his birthday) — could appeal to the expertise of makeup artists equipped with what looked like the full line of products.

Meanwhile, stations around the room told video stories of some of the women around the world that the Clara Lionel Foundation has supported. A tap of a table assignment card also gifted a $100 donation to the cause, courtesy of American Express. “It’s more than just the party, it’s the give-back,” repeat attendee Biggs Burke, record exec and Roc-A-Fella co-founder, reminded TIME. “First and foremost it’s for a good cause. Second, obviously, it’s a great party. There’ll be some D’usse spilling and Ace of Spades all over the place.” Added first-time guest Saint Jhn: “It’s my favorite night already.”

There was a subdued revelry to the evening early on, though. Maybe it was Rihanna’s late arrival. Maybe it was the fatigue of the end of New York Fashion Week. Maybe it was everyone’s understanding that climate change was very much a present threat. One of the honorees of the evening, Prime Minister Mia Mottley of Barbados, spoke eloquently and urgently about the effects of natural disasters on Caribbean nations like her own, comparing our global race to find solutions to that of the space race of the last generation.

Meyers was a game host, preferring to keep his monologue short. “A lot of charity events, it’s a lot of old white people. Tonight, I looked around and said — ‘Oh. I’m the old white person,'” Meyers joked. Rihanna, too, made quick work of her stage time. “My grandmother taught me that it only takes one person, doing one thing, to help someone else,” she said, urging the community to join her in activism. Other speakers included Justine Lucas, head of the Clara Lionel Foundation, and the activist Shaun King, another honoree for the evening, who spoke briefly about the power of collective organizing. Mottley made sure to remind everyone of Rihanna’s roots: “If you want to know why you’ve been blessed with this gem, come to Barbados.” And a professional auctioneer had a strangely reluctant crowd to start, but kept the bidding fast-paced, coaxing cash out of attendees with his British quips and unorthodox negotiation tactics; bidders held up paddles emblazoned with a giant photo of Rihanna’s face, a tradition at the party.

“Our work has never been more important,” Lucas stressed. Earlier, she discussed the Foundation’s work with TIME. “We’ve hit our stride in the emergency response space,” told TIME. “We’ve moved from reacting to natural disasters to making strategic investments year-round. Climate change is here; it’s going to cause an increasing frequency of these disasters,” she said. To that end, they’ve doubled down on the two pillars of education and climate resiliency, helping “harden” spaces in the Caribbean like reproductive health clinics to bounce back after crises. Lucas also noted Rihanna’s active role: “All of our strategy is informed by Ri. This is something she’s really passionate about,” she said. “Her family all live in Barbados. The Caribbean being particularly vulnerable to natural disasters is a reality for her.”

By midnight Pharrell — in a crisp shorts-suit and backup dancers in sweatshirts and skirts — took to the stage for a rapid run-through of hits, from “Happy” to “Hot in Herre,” and the center of the room turned into a mosh pit of elegantly-dressed attendees trying to get down while recording the rare live performance. (For his part, Pharrell seemed to be having a blast — jumping in on a few verses and traversing the stage with charisma, but mostly enjoying his role as a conductor of the crowd’s energy.) Many of the evening’s buzziest names seemed to have disappeared — only to turn up a few minutes later, once DJ Khaled brought them out one after another to perform. (“Another one!” indeed.) But of course it was Rihanna, singing “Lemon” live for the first time with Pharrell, who got the biggest round of applause. (Runner up: Megan Thee Stallion, the summer’s breakout star, getting her “hot girls” to rally.)

Open bars are dangerous, and it was well after 2:00 a.m. when the party began to break up, headed to after parties at night clubs in Manhattan’s Meatpacking District or straight home, equipped with a hefty goodie bag featuring Fenty Beauty products and bottles of D’usse cognac. (Saint Jhn had predicted there might be diamonds in the bags; sadly, he was mistaken.) Impassive security guards in black suits lined the exit, waiting for their charges to trickle out. Rihanna had disappeared, but the mood was warm as rappers, models and the rest of the guests mingled: it’s nice to feel like you’re contributing to something positive, even if you’re really just partying.

Earlier in the evening, on the lush purple carpet, Grammy-nominated rapper Rapsody talked to TIME about using her music platform to represent for women in hip-hop and lift up women’s voices. “That’s the power of being in this position,” she said. Rihanna is particularly powerful that way, galvanizing the music and fashion communities to support her causes. “There’s no doubt that Rihanna is a global brand, but more than anything she’s a global agent of change,” Prime Minister Mottley told TIME. “She hasn’t rested on her music or her entrepreneurship. She’s using it as a force for good.” 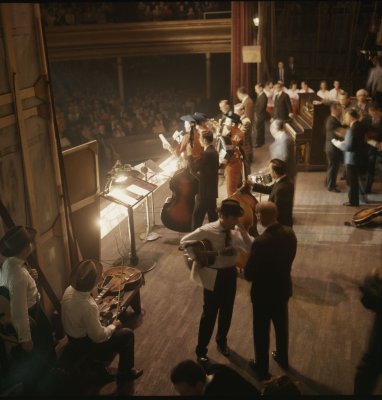 Black Artists Helped Build Country Music—And Then It Left Them Behind
Next Up: Editor's Pick