How My Dying Body Could Help Give Yours a Future

Ady Barkan sings "This Land Is Your Land" in the rotunda of the Russell Senate Office Building with his son Carl, wife Rachael and friends.
Jia-Ching Chen
Ideas
By Ady Barkan
Ady Barkan is a lawyer and an organizer at the Center for Popular Democracy, where he directs the Local Progress project and Fed Up campaign. He is the author of Eyes to the Wind: A Memoir of Love and Death, Hope and Resistance.

The neurologist tried to let us down easy, using tentative language. “I do see concerning signs of upper and lower motor neuron loss, which are indicative of ALS.”

I stared at the ground, then put my head in my hands.

“Are you all right?” she asked me.

“Well, you’ve just given me a death sentence.”

My wife, Rachael, started to shake, tears coming down her cheeks. She held Carl, our wonderfully chubby infant. Then I held them both. The doctor asked if she should give us some space. I said no. I wanted her there, sharing our sorrow. I didn’t want to be just one more patient she saw in her busy day. I wanted her recognition that my case was tragic and shocking and unreasonable.

“This is so outrageous,” I told her. “I’m 32, with a 4-month-old baby.” Had she ever had an ALS patient as young as me? “No,” she said: I was the youngest she had seen. The life expectancy of a patient with Amyotrophic Lateral Sclerosis (ALS), also known as Lou Gehring’s disease, is on average two to five years from the time of diagnosis, with just 20% living longer than five.

“We had our whole lives ahead of us,” I said, “and now it’s all disappearing.” Would I not be able to see Carl grow up into a boy and a man and a father himself? Would I not be able to sit with Rachael in our old age and look back on a joyful life filled with meaningful work and rewarding friendships? Our lives had been so different just the day before.

Zero percent was what I heard.

Just over a year later, in December 2017, I was in a wheelchair in the Russell Senate Office Building, with organizers from Center for Popular Democracy, as well as close friends who had joined us from all over the country. I had been working with CPD advocating for social and economic justice since long before I received my ALS diagnosis. What was new was the way I was using my newfound disability to gain increasing attention for the cause. In this case, I had flown into D.C. to protest the Republican tax bill, which would trigger enormous cuts to Medicaid and other crucial programs.

After a stop at Susan Collins’s office, where it became clear that she was unwilling to use her power to protect the health care of her constituents, we had walked toward John McCain’s office. He was our final hope for a Republican no vote. He was back home in Arizona, being treated for brain cancer. I had written a comically long speech addressed to him, pleading that he not make his final act the destruction of our health insurance system. It highlighted the ways in which Mitch McConnell had spent the last two decades undermining McCain’s priorities, including campaign finance reform and the norms that had long governed the Senate. And it reminded McCain of Trump’s attacks on his military service. My hope was to deliver the speech, get arrested and then try to get him a video of it. We turned a corner and I saw, up ahead, the majestic columns and high ceiling of the Russell Building’s rotunda. That setting would make for a far more compelling end to the day than another crowded hallway.

I directed everyone to come into the rotunda, and we formed a semicircle. Rachael stood next to me, holding Carl in her arms. His toddler friend Layaal and her parents gathered close. Megan Anderson, a disabled activist from Cincinnati, put her wheelchair on my other side.

A guitarist started strumming “This Land Is Your Land” by Woody Guthrie, which I had specifically requested for the occasion. Singing together creates powerful bonds and memories, and yet we do far too little of it in our movement—resorting instead to tiresome chants. I wanted this day to be different. Guthrie’s anthem beautifully weaves together themes of solidarity, injustice, struggle, and natural splendor. It’s a song about loving America while insisting that she become a radically more just nation. Brad Lander, the Brooklyn council member with whom I had founded a network of progressive elected officials Local Progress, stood in front of me, live streaming. So did my uncle, his eyes welling up with tears. I had to look away so as not to lose all control. We put our fists in the air and Carl sucked his thumb, soaking in the intense experience. The police began to move in, but my colleague Jen Flynn Walker begged them to let us sing for a few minutes. They obliged.

After we were done, I began mic checking my speech. I got a few sentences in before the police lost their patience. Over the din of the police bullhorn, with people being arrested left and right, and others escaping behind police lines, I had no hope of actually delivering my epic monologue. So we sang a few more choruses and offered up the obligatory chants. When the police came to arrest me, I stood up from my wheelchair, looked at the TV cameras and cell phones in the balcony above, and raised a framed photo of my family, trying desperately to focus attention on the heart of the matter. The police officer took my arm and walked me out to the elevator.

That night, after I had paid a $50 fine and been released from lockup — after my friends and family had finished eating Indian food out of to-go containers in our hotel suite, and after Rachael had gone to sleep — I sat in my recliner and tried to catch my breath. It had been a whirlwind day. A whirlwind week. A whirlwind year. A few months earlier, when my therapist had asked me whether ALS was giving me anything—in addition to taking so much away — I had struggled to answer. The best I could come up with was that it had created more time with friends and family and had let me skip some passport control lines on vacation.

But as I sat in the hotel room contemplating the possibility that I could use my ALS to block the tax bill — or at least gin up enough resistance to make the vote politically damaging for the Republicans — I realized that I now had a better answer to his question. ALS was giving me newfound power at the very moment that it was depriving me of so much strength. My voice was growing softer, but I was being heard by more people than ever before. My legs were disintegrating, but more and more people were following in my footsteps. Precisely because my days were numbered, people drew inspiration from my decision to spend them in resistance. Precisely because I faced such obstacles, my comrades were moved by my message that struggle is never futile.

Sitting in that armchair late into that night and the nights that followed, I began to understand just what it was that I was doing in Washington, D.C. Of course, I had come to try to defeat the tax bill. But I was in search of so much more. I was in search of a legacy and in search of a personal story that ended in something more than tragedy. It was through collective struggle, I began to realize, that I could find my personal liberation. I could transcend my dying body by hitching my future to yours. We could transcend the darkness of this moment by joining the struggles of past and future freedom fighters. By coming together in pursuit of a different world, we could tell a different story about who we were—who I was. We could, in the words of my aunt, “make meaning” out of our time on earth — make meaning even out of my ALS.

Copyright © 2019 by Ady Barkan. From the forthcoming book Eyes to the Wind: A Memoir of Love and Death, Hope and Resistance by Ady Barkan, to be published by Atria Books, A Division of Simon & Schuster, Inc. Printed by permission. 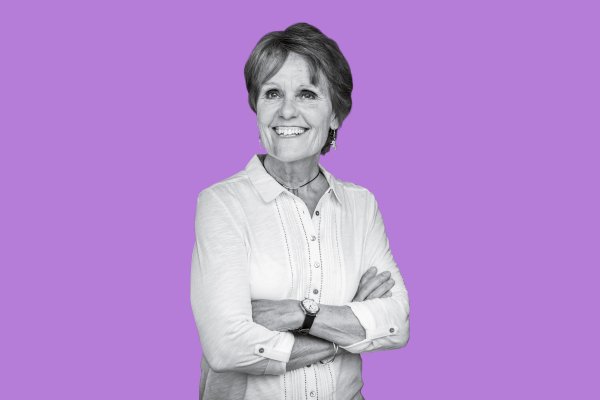 A Cognitive Researcher Explains How Male and Female Brains Aren't So Different
Next Up: Editor's Pick