Obama Is Like LBJ. No wait, FDR, Reagan, JFK, Clinton…

On the front page of the New York Times this week, Peter Baker had a story comparing President Obama’s legacy with that of Lyndon Banes Johnson. But reading the story, I couldn’t help asking myself: LBJ?

I thought he was like FDR—as TIME wrote in a cover story. Or JFK. Or Ronald Reagan (as TIME wrote in another cover), Bill Clinton or Abraham Lincoln, Obama’s favorite predecessor. For the last eight years, Obama has been compared to virtually every notable president, including Richard Milhouse Nixon. When he’s spending money he’s Roosevelt, when he’s cutting it, he’s Reagan or Clinton. If it’s about race, he’s Licolnesque or LBJ’s heir. And when his integrity is called into question, he is Nixonian and worthy of impeachment. And we haven’t even gotten to foreign policy yet, where, as Washington Post columnist Dana Milbank noted last month during the debate over Ukraine, Obama was criticized on all ends of the spectrum: a “king,” “monarch,” “imperial,” “weak,” “indecisive,” “totalitarian.”

I can’t remember any other President drawing so wildly vacillating labels. George W. Bush was pretty much only compared to his father (he likened himself to Dwight D. Eisenhower, who he said was underrated and misjudged at the time). Clinton drew some Kennedy comparisons, both on politics and on extracurricular activities. But there weren’t these regular attempts to liken them to some other figure—let’s not even get started Obama’s non-presidential comparisons from friend and foe, people like Martin Luther King Jr., Adolf Hitler, Joseph Stalin, Osama bin Laden and Paris Hilton.

So why, after six years in the White House are we still struggling to define Obama? Perhaps on the international front because in complex times there is no readily tangible “Obama doctrine”—or a simple idea that can be applied throughout his foreign policy. And on the domestic front, Obama has also swung between moments when he was hyper partisan, like the first two years of his tenure, to moments when he tried to be more bipartisan, as when he attempted a Grand Bargain with House Speaker John Boehner. He has done things to anger parts of his base: his inability to close Guantanamo, his backing of the National Security Agency and FISA courts snooping, his continued use of drones, his big pushes on trade, and his offers to cut entitlements to reduce federal deficits. And things that have delighted them: ObamaCare, ending Don’t Ask Don’t Tell, endorsing gay marriage, financial reregulation, ending the wars in Iraq and Afghanistan and the stimulus.

Obama himself invokes Reagan when he’s trying to be bipartisan or tough—think of his Berlin speech during the campaign where he tried to echo Reagan’s rally call to “tear down this wall!” But mostly, he references Lincoln, announcing his 2008 campaign in Springfield, Illinois where Lincoln announced his presidential bid in 1858. Obama screened Steven Spielberg’s “Lincoln” at the White House and cited Lincoln in March defending his decision to appear on Funny or Die’s “Between Two Ferns” comedy show. “If you read back on Lincoln, he loved telling the occasional bawdy joke and, you know, being out among regular folks,” Obama said March 20 in a radio interview with ESPN’s Colin Cowherd.

But if Lincoln’s goal was to unite a divided nation, Obama’s challenge has been to unite a much more fractured America. Lincoln had one question to answer in his time. Obama has 50. Lincoln was criticized for waiting too long for public opinion to come around to make a decisive move against the South. Obama has moved as the nation has swung: for gay marriage when it reached a tipping point, for and then against involvement in Syria in deference to public opinion, for and against aggressive measures by the National Security Agency as public opinion swung around recent classified leaks. Which is partly what makes Obama so hard to define. In some respects he is like LBJ, FDR, Reagan, Clinton, JFK. In other respects, he’s like none of them. And with just three years left in his presidency, his legacy is not yet written in stone. 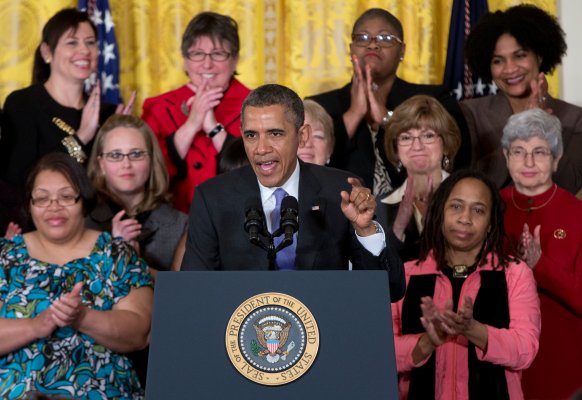 Prez vs. The Pay Gap
Next Up: Editor's Pick