If We Want to Address the Crisis of Veteran Suicide, We Must Acknowledge Its History

In 2018, 33-year-old American Marine veteran Justin Miller died by suicide in the parking lot of the very organization he had turned to for help. After four days in the Minneapolis Department of Veterans Affairs (VA) Hospital, Miller had been released and immediately took his own life. Between October 2017 and November 2018, 18 additional suicides were recorded on VA campuses around the country. As recently as Aug. 7, 2019, another veteran took his own life in a VA parking lot.

These types of deaths are not limited to the United States. In December of 2018, a public mass vigil in Britain remembered 70 Scottish veterans who died by suicide that year. This event formed part of a public protest at the lack of official care and support for veterans. In April of this year, debate within the House of Commons clarified that the official statistics that determined there had been 58 veteran suicides in 2018 had grievously underestimated the actual figure. Third-sector organizations, public groups and charities assured the British government that the figure was almost double the official statistics.

An investigation in 2019 claimed that in Germany many veterans felt ignored and disassociated from society to the point of suicide as a result of the negative public perception of the German military that had developed throughout the 20th century. Concerns are also growing in Australia, both politically and publicly, as recognition of 373 military suicides between 2001 and 2016 has led to increasing calls for an investigative Royal Commission to safeguard the lives of former military personnel.

Veteran suicide is a growing issue and is a crisis that can only be improved through recognition and discussion in society. However, one part of the story that is rarely recognized is how deep its history goes. This problem is not one limited to a single country or point in time, nor is its importance limited to awareness days like World Suicide Prevention Day on Sept. 10. Military suicide has occurred for centuries around the world but has most often been overlooked or ignored. It is a difficult topic, yet, to save futures lives and pay respect to those who took their own lives, that history must be researched, acknowledged and debated.

A Century of War and Suicide

Military suicides both within and outside service date back to the formation of military groups. However, as a look at U.S. and U.K. responses to the problem shows, attention has only really begun to increase over the last century.

When the British Ministry of Defence in June of this year unveiled plans to increase spending on the care and support of British veterans, the measure came over a century too late to save the life of Private Walter Were Joyce in 1914, whose suicide note confirmed that he had taken his own life after being returned home unwell and feeling he had lost his societal purpose. The note read, “As I am unable to march, I am no good as a soldier.”

In the years surrounding World War I, governments on both sides of the Atlantic were unsure how to deal with the issue of military suicide and the accompanying association between war trauma and mental illness. In the U.S., veteran suicide quickly became apparent as a postwar problem, at least for those inclined to recognize it. As a result of his work with returning veterans, American psychiatrist Dr. Thomas Salmon claimed that over 400 American veterans had died by suicide in New York State alone as a result of psychiatric trauma of the First World War.

Yet official action was minimal. Both in Britain and the United States, for the most part, veterans’ health was left to personal responsibility and autonomy, an omission that gained certain public sympathy for the plight of the returning heroes, at least until financial recession took priority in the 1930s. However, the politicians of the day were not entirely blind to the issue. In Britain, landmark legislation was introduced in 1919 allowing the widows of suicide cases to receive their husbands’ pensions—a positive step in showing some sensitivity to the impact of self-destruction.

Following the Second World War, both nations established somewhat better systems for veteran support, including the Servicemen’s Readjustment Act of 1944 in the U.S., and the focus on improving skills and education for British soldiers before demobilization in Britain. However, much of the overall care and investigation was left to charitable organizations that developed over the next 70 years, including the British Legion, Combat Stress and Help for Heroes.

Later conflicts brought new challenges. Some unsubstantiated claims allege that between 50,000 and 100,000 Vietnam veterans have taken their own lives since 1980. Official investigations rebuke this figure, setting it closer to 10,000 deaths between 1980-1990. Yet such claims—as well as films such as Taxi Driver and Full Metal Jacket—helped grow public concern about the issue of service and veteran mental health in the later 20th century.

Recent wars in the 21st century have also taken a significant toll. In March 2019 the White House promised an “aspirational, innovative, all-hands-on-deck approach to public health” that would include a focus on veteran suicide, as veteran death rates have risen above 20 per day since 2001.

Much has undoubtedly improved over the last century. However, concerns remain high that while much is being promised, little is being done.

In the United States, concerns surrounding the training and effectiveness of the Department of Veterans Affairs has been compounded by reporting that veterans are 21% more likely to take their own lives than their civilian counterparts. The Secretary of Veteran Affairs in 2018 confirmed that combinations of addiction and insufferable daily pain increase the likelihood of suicide in veterans. In the U.K., the impact of the issue has been felt at the highest level; Prince Harry, Duke of Sussex, in August mourned the death of his friend Jules Roberts, which the Sunday Mirror reported was the result of suicide, and with whom he had helped raise money for organizations like Heads Together and Walking With the Wounded, which support veteran mental health.

U.S. House Speaker Nancy Pelosi (D-CA) speaks while flanked by members during during a news conference on suicide prevention among U.S. Veterans, at the U.S. Capitol on April 29, 2019 in Washington, D.C.
Mark Wilson—Getty Images

One of the reasons for this limited response is the fact that suicide is a difficult topic in society. Historically, in western cultures, with some notable exceptions, suicide cases were treated with at best disdain and at worst barbarous practices. In Ancient Greece, suicide was justifiable under times of immense suffering. In Ancient Rome, suicide was permitted as an alternative to dishonor, but not for slaves and soldiers, the former because of the mercantile nature of their existence and the latter as a mark of patriotism. Mark Antony’s suicide stands as an exception in the grey area between personal disgrace and military duty.

Early Christianity struggled with suicide, as the notion of mortal life as the prelude to a paradisiacal existence actively encouraged early retirement from life, due in part to the ambiguous wording by Paul in Acts 20.24. In the 5th century, St. Augustine clarified suicide as a sin within The City of God, and so began the Christian war on suicide. Increasingly, suicide became socially and morally aberrant. Attempted suicides could be excommunicated from the Church, while successful cases were refused Christian burial in consecrated ground, could be dragged through the streets, buried at crossroads to torment their soul and have their bequeathments and estates confiscated.

During the 19th and 20th centuries, attitudes toward suicide began to change from disgust to shame. New understandings of mental health and social illness connected self-destruction to insanity, which carried a stigma of its own. Beyond the religious implications, the morality of self-destruction captured social attention as questions developed over blame, causality and responsibility. Those themes continued to permeate society for decades.

In the 21st century, suicide is just as difficult to discuss, except the debates are significantly broader. Social and medical responsibility lie at odds with individual autonomy and personal bias. Social media and shows such as 13 Reasons Why and Black Mirror have opened new debates on suicide, whether they are accused of glamorizing it or hailed for condemning society and governments for lack of care and support.

Suicide is an emotional and emotive topic that is difficult to understand, hard to investigate and challenging to prevent. Knowing that it has been going on for so long might be discouraging. However, only through discussion can issues such as mental illness, societal change, social pressures and causal links between self-destruction and military service be confronted.

Simply, men and women are dying. It is crucial that societies around the world recognize this, discuss it and face it—to understand the past and to save lives in the future.

Simon Harold Walker is a suicidologist and medical historian associate researcher at the University of Strathclyde and author of the forthcoming book Physical Control, Transformation and Damage in the First World War: War Bodies. 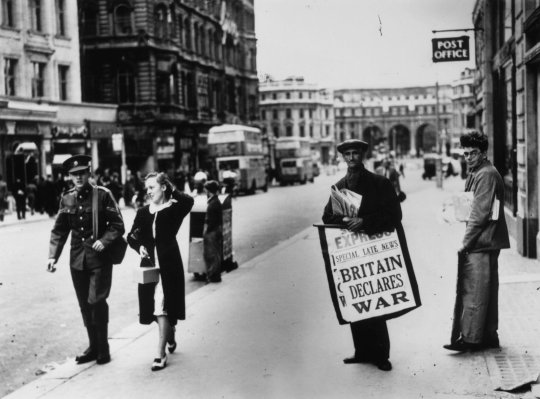 World War II Launched a New Age of Global Power. 80 Years After the War Began, That Era Is Ending
Next Up: Editor's Pick