In There’s Something In the Water, a new documentary premiering at the Toronto International Film Festival this weekend, co-directors and producers Ellen Page and Ian Daniel introduce viewers to several women who are taking a stand against environmental racism in Page’s home province of Nova Scotia, Canada. In a first clip from the movie, above, we meet one such woman, Michelle Francis-Denny.

The granddaughter of a former Pictou Landing First Nation chief, Francis-Denny has seen the ramifications of environmental injustice in her community. When her grandfather was in charge, local government officials lied to him in their efforts to secure the rights to Boat Harbour — a valuable resource for the indigenous community — to use it for pulp effluent, or liquid waste, from a nearby mill. Promising that no harm would come to the area, the provincial government paid the Pictou Landing First Nation $65,000 to gain control of the water. In what’s now known as one of the worst instances of environmental racism in Canada, Boat Harbour became a dumping ground for toxic waste from the mill.

In the clip, Page is seen drawing her scarf over her face, trying to block the stench that now emanates from Boat Harbour, following about 50 years of pollution. Francis-Denny explains that the smell pervades the entire indigenous community that calls the area home.

“It just sticks to the walls,” she says. “All this is blowing over into our community, so not only are we suffering knowing that this exists to our water, look at our air as well. It’s sad.”

Boat Harbour is just one example of the way environmental racism — the decisions and policies implemented by local governments and corporations that expose minority communities to environmental hazards — plagues indigenous and black communities across Nova Scotia. Page grew up unaware of the impacts of such policies, but upon coming to understand them more fully as an adult, decided to shine a light on the issue in partnership with Daniel, her collaborator on the Viceland series Gaycation.

Inspired by sociologist Ingrid Waldron’s book that shares the film’s name, Page and Daniel, who shot the film themselves, traveled to three different parts of Nova Scotia, including Boat Harbour. They spoke with the women — and it’s primarily women leaders who are leading the charge — taking on the challenge to end the exposure to toxins and bring healing to their communities. At the Shubenacadie River, a group of indigenous women who call themselves the “grassroots grandmothers” bands together to protect the water from pollution by a gas company. In Shelburne, a woman takes Page around a predominantly black neighborhood where few residents appear to be unaffected by cancer and other disastrous health problems following decades of exposure to toxins from a garbage dump installed nearby in the 1940s.

The pain revealed in There’s Something In The Water will stick with viewers long after watching. Beyond the physical toll brought on by the pollutants, the film explores the generational effects of environmental racism and the chain of devastating events it can set off within a person, a family and a community. Later in the film, Francis-Denny says her grandfather’s guilt over what happened with Boat Harbour was inherited by the rest of his family. Most of them are dead now, whether from cancer or suicide, alcoholism or drug addiction, she says.

“I often wonder, if this didn’t happen, would we have had a chance to live in a way where we could grow old together?” she asks through tears.

Page, whose impassioned call for recognizing environmental racism during an appearance on The Late Show With Stephen Colbert went viral earlier this year, says she feels a strong responsibility to use her platform to educate others in the hopes of affecting change. “It’s hard for me to imagine you can’t hear these stories and witness these individuals and what they’re doing every day, and not have a wakeup call,” she tells TIME.

This original version of this story misstated the way in which There’s Something in the Water was filmed. Co-directors Ellen Page and Ian Daniel shot the documentary themselves, they did not use a camera crew. 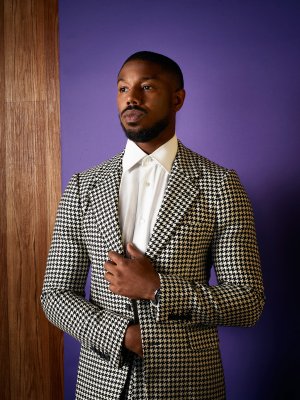 Michael B. Jordan Is Redefining What It Means to Be a Movie Star
Next Up: Editor's Pick