The Oldest House is a maze of concrete and paperwork. It’s a building full of secrets, stuffed top to bottom with government bureaucrats, some of whom are now host to an interdimensional plague. The Oldest House is an office building in the heart of New York City, but it’s also a portal to everywhere and all the spaces between. It’s a place where office drones file paperwork. It’s a place where the U.S. government researches the “paranatural.” It’s the place where Jesse Faden thinks she can find information about her long-missing brother.

This is Control, a third person action game available now on the Playstation 4, Xbox One, and PC. Playing Control is like watching an episode of The X-Files directed by David Lynch where Dana Scully has Jedi powers. It’s also one of the best games I’ve played this year. Within hours of picking up the controller, I had protagonist Jesse Faden ripping hunks of concrete from the office walls and hurling them at bad guys while dashing around the room like Obi-Wan Kenobi.

Control is the latest game from developer Remedy Entertainment, the studio behind Max Payne, Alan Wake, and Quantum Break. Remedy has long flirted with Lynchian themes and aesthetics — Max Payne and Alan Wake are full of Twin Peaks references — but Control is the first time Remedy has given itself over to Lynch’s worldview in total. The result is a clever mix of Max Payne’s gameplay and Lynch’s aesthetics with a story you’d be happy to watch as a show on HBO or Netflix.

Read more: The 10 video games we can’t wait to play this fall

The game starts when Faden shows up at The Oldest House on the trail of her missing sibling. The Oldest House is home to the Federal Bureau of Control, a federal agency that studies and contains “paranatural” events. Faden finds The Oldest House in disarray, with some workers missing and others taken over by a horrifying creature known only as “The Hiss.” When she gets to the boss’s office, she finds him dead and picks up his service weapon — a strange undulating pistol. The weapon talks to her in cryptic riddles and informs her that she’s the boss now, and has to rid the Oldest House of The Hiss.

Control is obviously a labor of love from Twin Peaks junkies. The first character Faden meets in The Oldest House is Ahti, a janitor of vaguely Scandinavian heritage who clearly knows more about what’s going on than he lets on. One of the game’s most mysterious areas is The Ashtray Maze, a spiraling and looping portion of the office clearly based on Twin Peaks’ Red Room. The Board — the powers that seem to govern the Astral Plane and, by extension, The Oldest House — sound a lot like Lynch’s backwards-talking supernatural creatures.

If all Control did was pay homage to Lynch, it’d be a cult favorite quickly forgotten. But Control is also fun to play. As Faden explores The Oldest House, she collects Objects of Power that give her control over paranatural forces. A large floppy disc that once contained Soviet nuclear launch codes allows Fadden to pick up and throw objects around. A safe that constantly bleeds and rumbles lets her create a shield. An early 20th century x-ray box allows her to take control of her enemies.

The entire suite of Control’s powers feel like they’re copied directly from Star Wars — and that’s a good thing. I levitated through The Oldest House’s corridors while taking control Hiss soldiers’ minds and hurling concrete at distant enemies. When I got into trouble, I levitated bits of the surrounding environment — office chairs, desks, pieces of the floor — to swirl around me like a shield.

Control also looks and sounds incredible. The Hiss constantly chatter and ramble a string of nonsense sentences that you have to focus on to understand. The louder the chattering, the closer The Hiss. It’s disturbing stuff that sounds exactly like what you’d imagine you’d hear in an office building possessed by evil forces.

Fadden, Ahti, and the rest of the game’s characters look lifelike, and Control intersperses its in-game cutscenes with real world footage. The graphics are so good that the transition from in-game scenes to real-life cutscene is never jarring. The environment is destructible, so Faden can toss staplers, paperwork, and office chairs around with abandon. The walls are pockmarked with bullet holes, while pillars of steel and concrete are left gutted by explosives and “parantural” forces. And while Control is a blast to play and looks stunning, it’s the story that really holds it together. Faden’s journey through The Oldest House to find out what happened to her brother and rid the FBC of The Hiss kept me hooked until the very end. 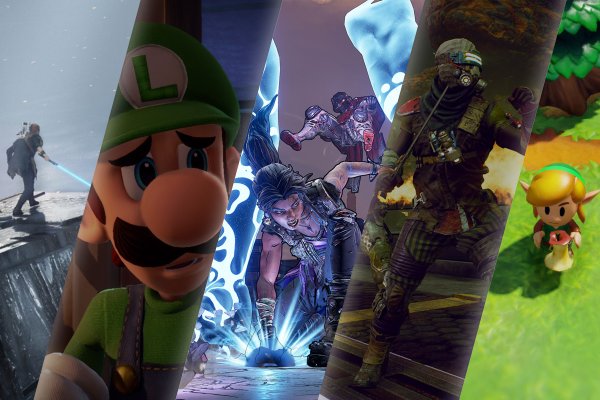 The 10 Video Games We Can't Wait to Play This Fall
Next Up: Editor's Pick