A massive chunk of free-floating sea ice is seen from above during NASA’s IceBridge mission in November 2017.
Paolo Pellegrin—Magnum Photos for TIME
By Jeffrey Kluger

Humans were not around to see Antarctica in the good times, tens of millions of years ago, when it was home to palms and baobab trees, reptiles and marsupials. It had some of the same mountains it has today, some of the same valleys and inlets. But it didn’t have the same address.

Long ago, Antarctica was located in the mid-­latitudes, once part of the super­continent Gondwana, until it slowly broke away, leaving continental kin like Africa and South America behind. It then went its own way, carried off by continental drift at just 1 to 2 in. per year, until it wound up where it is today, banished by tectonics to the bottom of the world.

There, the 5.4 million sq. mi. ­continent—larger than Australia’s 2.9 million and Europe’s 3.9 million—gets its sunlight only laterally, never vertically, and will thus ever be sunk in a deep freeze, until the same crustal migration carries it to a kinder part of the planet. For now, Antarctica is buried under a layer of ice that averages 7,100 ft. deep—or 1.3 miles. That dense covering represents 90% of all the world’s ice and 70% of its fresh water, locked in a wasteland.

Only it’s not a wasteland. Antarctica is home to penguins, seals, visiting whales, gulls, krill, albatross and more. Like all continents, it has its complex food web; like all continents it has its seasons and its landscapes and its peaks and valleys. They aren’t the seasons we might like; it’s not a landscape we could survive. But our species is not the sole measure of a continent’s worth.

What’s more, all of that entrained ice is serving us well. In a world in which Antarctica were situated elsewhere, the ice would be water and the oceans would be deeper, inundating what are now our coasts. It wouldn’t have mattered to us if we’d been born into that world. If there had been no Florida in the first place, we never would have built a Miami. But there is, and we did. And now, thanks to our industrial enterprise and our fossil-fuel gluttony, we’re raising the temperature and melting the ice. The Arctic is already vanishing and the Antarctic is following, threatening us with the very inundation the polar ice spares us. The numbers here tell an alarming story—and it’s a story we are every day authoring. 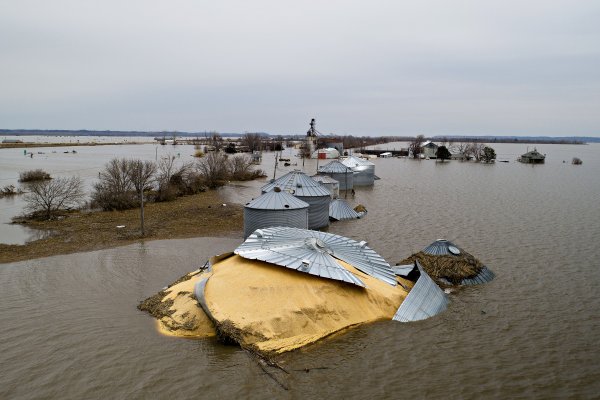 How Climate Change in Iowa is Changing U.S. Politics
Next Up: Editor's Pick