A Background Check Loophole Let the Odessa Shooter Get a Weapon. Millions of Guns Change Hands That Way

A chalk message at a memorial for victims of a mass shooting, at the University of Texas of the Permian Basin (UTPB) on Sept. 2, 2019 in Odessa, Texas.
Cengiz Yar—Getty Images
By Tara Law

Reports say that the gunman who murdered seven people in a mass shooting in Odessa, Texas, on Saturday, legally never should have been able to buy a gun. But after reportedly failing a federal background check, he managed to get ahold of a gun anyway by purchasing it from a private seller.

Some experts say that this case shows that private sales are a “gaping loophole” in the background check law, which must be closed to reduce gun violence.

About 22 percent of gun owners in the United States report obtaining their most recent firearm in the last two years without a background check—which means millions of guns are exchanged this way each year.

The question of expanding federal background checks has taken on increased urgency over the last year. The House of Representatives passed an expanded background check bill earlier this year. President Donald Trump has gone back and forth on background checks. After shootings in Dayton, Ohio and El Paso, Texas last month, he has expressed willingness to support expanding the law, but on Sunday he said that the measure wouldn’t have stopped most shootings.

“For the most part, sadly, if you look at the last four or five (shootings) going back even five or six or seven years … as strong as you make your background checks, they would not have stopped any of it,” Trump said, according to the Associated Press.

However, some background check advocates say that the Odessa shooting illustrates why closing loopholes in the law is crucial for preventing gun violence. As California Rep. Adam Schiff, a Democrat, tweeted after the shooting, “Could there be a more compelling case for why we need universal background checks?”

Not all legislators were convinced that the Odessa shooting should be interpreted in this way. Rep. Dan Crenshaw, a Texas Republican who has voted against universal background checks, responded to Schiff’s tweet that the expanded law would only have prevented the shooting if the law had been “self-enforce[d].”

“This is the first mass shooting where a universal background check *possibly* would have prevented him from having a gun, if and only if, they decided to self-enforce that law. Guys who shoot cops tend not to self-enforce laws. And we don’t make sweeping policy on one situation,” Crenshaw wrote on Twitter.

Gun violence experts, meanwhile, say that while closing background check loopholes won’t prevent every mass shooting, expanding the law is an essential component of keeping guns away from people who are potentially dangerous.

According to Dr. Garen Wintemute, the director of U.C. Davis’s Violence Prevention Research Program, closing the private sales loophole would make it more difficult for criminals to avoid creating a paper trail or for a prohibit a banned person from buying a firearm. Otherwise, Wintemute says, there’s little to prevent people from selling guns to people that they don’t know.

“It’s only a crime for the seller to sell to me, a prohibited person, if – to use the exact words- ‘they know or have reasonable cause to believe” that’s what they’re doing,” Wintemute says. “What extending background checks to private party sales does is make the operations of the criminal market much less efficient.”

Dr. Michael Siegel, a professor at Boston University School of Public Health, says that the idea that laws don’t matter makes about as much sense to him as removing traffic lights from roadways and having an “honor system.”

“Traffic lights save lives, create order where there would be chaos. And there’s no question that [background checks] save lives, even though there are people who are occasionally going to violate the law,” Siegel says.

He adds that expanding background checks would ensure that the law fulfills its original intent:f making sure that dangerous people cannot obtain guns.

“You don’t accomplish anything by having the prohibitors [for possessing a gun] if you’re not checking to see if someone is in that category,” Siegel says.

However, some experts are convinced that the current background check proposals could have broader implications for individual rights.

David Kopel, an adjunct scholar at the Cato Institute and Denver University adjunct law professor, tells TIME that he is concerned that the federal proposal would help to create a registry of gun owners, which could someday be used to seize firearms from their owners. He also fears that a requirement for gun exchanges to take place at a gun dealer would be too inconvenient for most casual gun sales, and deter people from following the law.

Siegel and Wintemute agree that there are other ways to make background checks more effective.

For instance, Wintemute argues that states and the federal government should work to encourage more states to add felonies to record systems. Only 71% of all felony charges with final disposition were recorded in state criminal history information systems in 2016. Wintemute notes that the guns used in some mass shootings – including the Charleston, S.C., and the Sutherland Springs, Texas, shootings – might not have been sold if the background checks had reviewed the gunmen’s entire histories.

Siegel also argues that Congress should put in place other measures to make sure that dangerous people cannot obtain guns, including ending a rule that lets people buy a gun if a background check isn’t completed in three days and banning people who have committed violent misdemeanors from buying guns.

Even without these measures, however, Siegel argues that background checks should be expanded.

“On the whole, background checks will save lives,” Siegel says. 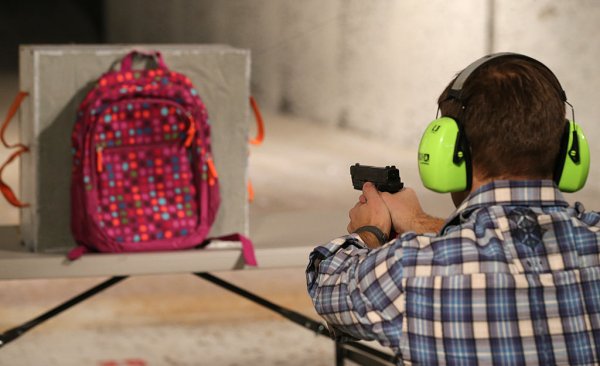 Sales Of Bulletproof Backpacks Rise After Mass Shootings
Next Up: Editor's Pick