A Mississippi Wedding Venue Refused to Serve Gay or Interracial Couples. Amid Backlash, the Owner Is Now Apologizing

A Mississippi wedding venue that refused to serve an interracial couple has apologized in the face of backlash over its discriminatory policy.

A woman believed to be the owner of Boone’s Camp Event Hall in Booneville, Mississippi was recently captured on video explaining why the venue was unwilling to accommodate gay and interracial couples.

“First of all, we don’t do gay weddings or mixed race — because of our Christian race, I mean, our Christian belief,” the woman says in the now-viral video. “I don’t want to argue my faith,” she says. “We just don’t participate.”

The video — which was posted by 24-year-old LaKambria Welch and first reported by the website Deep South Voice on Sunday — quickly sparked backlash, prompting an apology on the Boone’s Camp Event Hall Facebook page. (The page has since been deleted.)

Welch’s original video post appears to have been deleted as well, but she told the Washington Post that she traveled to the event hall to get answers after the owner told her brother, who is black, and his fiancée, who is white, that the venue could no longer accommodate their nuptials.

“When she explained that she doesn’t do the two specific type of weddings, I felt myself starting to shake,” Welch told the Post. “Just hearing it gave me chills.”

“Religion should never be exploited as a license to discriminate,” Alphonso David, president of the Human Rights Campaign, said in a tweet. “This incident is yet another glaring example of how white supremacy and anti-LGBTQ bigotry are not merely things of the past. We must take action against these blatantly illegal practices.”

In a statement posted on its Facebook page, the City of Booneville said city leaders “do not condone or approve these types of discriminatory policies.”

In 2016, Mississippi passed a controversial law allowing businesses to refuse services to LGBTQ people based on religious objections. That means the venue’s refusal to host weddings for gay couples, based on religious beliefs, is protected by state law.

But the law does not address race or ethnicity, and the landmark 1967 U.S. Supreme Court decision, Loving v. Virginia, made interracial marriage legal across the United States. Under federal law, it’s illegal to discriminate on the basis of race in public accommodations.

Opponents of religious-exemption laws — like Mississippi’s — have long argued they could be used to enable discrimination on the basis of race. As NAACP Legal Defense and Educational Fund President Sherrilyn Ifill noted, historical objections to interracial marriage and integration were often grounded in religious beliefs.

“The conduct in this video is illegal,” Ifill said on Twitter. “A reminder that battles won long ago are being reignited.”

It’s not clear whether this incident could result in legal action. In a statement provided to the New York Times, Boone’s Camp Event Hall said they had invited the couple back to use the venue, but Welch told the Times her brother had been already contacted by many other event spaces.

In the apology that briefly appeared on the Boone’s Camp Event Hall Facebook page, according to screen shots captured before it was deleted, the venue’s owner said she had studied the Bible, spoken to her pastor in recent days and learned her belief about interracial marriages was “incorrect.”

“I have, for many years, stood firm on my Christian faith not knowing that biracial relationships were NEVER mentioned in The Bible!” the post said. “All of the years I had ‘assumed’ in my mind that I was correct, but have never taken the opportunity to research and find whether this was correct or incorrect until now.”

“To all those offended, hurt or felt condemn by my statement I truly apologize to you for my ignorance in not knowing the truth about this,” she wrote. 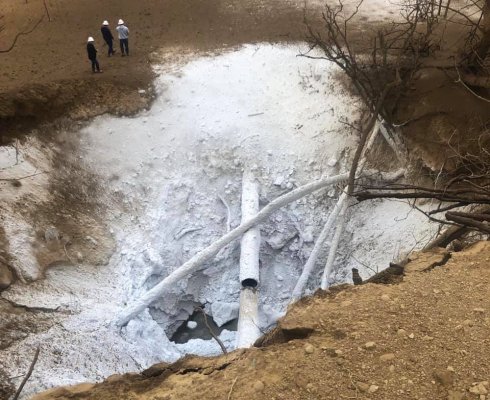 Dozens Hospitalized After Miss. Pipe Rupture
Next Up: Editor's Pick