Secretary of State Mike Pompeo meets with Afghan President Ashraf Ghani, at the Presidential Palace in Kabul, Afghanistan, Tuesday, June 25, 2019, on an unannounced visit to the country.
JACQUELYN MARTIN—AFP/Getty Images
By Kimberly Dozier

The U.S. is closing in on a deal with the Taliban that is designed to wind down America’s 18-year war in Afghanistan, but the best indication of how risky the pact may be is this: Secretary of State Mike Pompeo is declining to sign it, according to senior U.S., Afghan and European officials.

The “agreement in principle” that U.S. envoy Zalmay Khalilzad has hammered out in nine rounds of talks with Taliban representatives in Qatar would take the first tentative steps toward peace since U.S. and allied forces deployed to Afghanistan following the attacks on 9/11, according to senior Afghan and Trump Administration officials familiar with its general terms. Defense Secretary Mark Esper was scheduled to discuss the closely held details of the deal with President Donald Trump in a Sept. 3 meeting, according to senior administration officials. If Trump approves and a deal is struck, it could begin a withdrawal of some 5,400 U.S. troops, roughly a third of the present force, from five bases within 135 days.

But the deal doesn’t ensure several crucial things, those familiar with the discussions tell TIME. It doesn’t guarantee the continued presence of U.S. counterterrorism forces to battle al Qaeda, the survival of the pro-U.S. government in Kabul, or even an end to the fighting in Afghanistan. “No one speaks with certainty. None,” said an Afghan official taking part in briefings on the deal with Khalilzad. “It is all based on hope. There is no trust. There is no history of trust. There is no evidence of honesty and sincerity from the Taliban,” and intercepted communications “show that they think they have fooled the U.S. while the U.S. believes that should the Taliban cheat, they will pay a hefty price.”

That may explain why Pompeo declined to put his name on the deal. The Taliban asked for Pompeo to sign an agreement with the Islamic Emirate of Afghanistan, the official name of the government founded by the Taliban in Afghanistan in 1996, four U.S., Afghan and European officials familiar with the discussions tell TIME. Having the Secretary of State sign such a document would amount to de facto recognition of the Taliban as a legitimate political entity, and he declined to do so, the Afghan officials say.

Pompeo’s office declined to comment before publication of this story. After it was published, Pompeo said through a spokesperson that he might sign if Trump and all parties struck a deal. “There is no agreement to sign yet. If and when there is an agreement that is approved by all parties, including President Trump and if the Secretary is the appropriate signatory, he will sign it,” State Department spokesperson Morgan Ortagus emailed TIME Wednesday evening.

There are two alternatives. Khalilzad himself may sign it. Or the U.S. and the Taliban may simply issue a joint statement, supported in turn by the U.S.-backed government in Kabul and a number of other countries, including Japan, Russia and China, two Afghan sources familiar with the deliberations tell TIME.

That diplomatic sleight of hand might solve the signature problem, but it won’t do much to address the core challenges facing those who want to give peace in Afghanistan a chance after four decades of war. As it stands, the agreement would set the stage for the withdrawal of most American forces by the end of November 2020 if the Taliban do three things: open negotiations with the U.S.-backed Afghan government; reduce violence near areas U.S. forces control; and keep foreign militants out of the areas they control, according to current and former U.S., Afghan and European officials, who all spoke anonymously to describe the sensitive and fractious deliberations.

U.S. military and intelligence officers and diplomats who have served in Afghanistan worry that once a withdrawal is underway, it will be irreversible, given Trump’s promise to end the U.S. involvement in the war there, the fast-approaching 2020 U.S. elections and the absence of public support for the war. The price of peace, they fear, might include reversing much of the hard-won progress towards building a stable country over nearly two decades of war. These officials fear a roll back of civil, human and women’s rights in Afghanistan; a weakening of the national, regional and local governments; the deterioration of anti-Taliban military and law enforcement forces; and a rise in corruption.

It is “not clear whether peace is possible,” nine former high-ranking U.S. officials, including a former deputy secretary of state, warned in a Sept. 3 letter distributed by the Atlantic Council. “Secondly, there is an outcome far worse than the status quo, namely a return to the total civil war that consumed Afghanistan.”

That risk was made plain Monday, when a massive, deadly Taliban car bomb exploded in Kabul, just as Khalilzad was concluding an hour-long interview promoting the tentative peace deal to an Afghan news outlet. It was a reminder that as it now stands, the agreement does not require the extremist Islamic group to reject terrorism or stop attacking Afghan forces, officials say. The talks between the Taliban and the U.S.-backed Afghan government are expected to begin in Oslo shortly after a U.S.-Taliban agreement is finalized, officials say.

For their part, the Taliban have assured their fighters that the U.S. will withdraw all foreign troops within a little more than a year. In their communications with their rank and file, Taliban officials also go light on mentioning any “conditions” that would give the Americans the right to freeze or reverse the troop withdrawal, Afghan officials familiar with the Taliban communications tell TIME.

Taliban commanders have radioed their followers to “prepare for victory” by welcoming Afghans who sided with the Americans rather than engaging in bloody revenge, a senior Afghan official said. Senior Taliban officials have bragged to other foreign officials that all you have to do to defeat the Americans is refuse to surrender, and ultimately, the Americans will give up, a former senior U.S. official told TIME.

“The Taliban’s goals for Afghanistan have not changed,” said Bill Roggio, of the Washington, D.C.-based Foundation for Defense of Democracies. “It seeks to eject the U.S., reestablish its Islamic Emirate of Afghanistan and impose its Islamic government.”

Still, the agreement may be the best deal the U.S. and its allies can get to head off a pre-emptive pullout of U.S. troops in time for the 2020 U.S. elections. Military officials have long known they need to reduce the number of troops to a smaller, cheaper footprint to mollify U.S. policymakers tired of writing checks after 18 years of war, and a U.S. public that doesn’t understand why the troops are still there.

For Afghan officials, or at least the government of Afghan President Ashraf Ghani, it’s a final insult and a dark turning point in relations with Washington. Publicly, Ghani has tentatively, though not officially, embraced the deal. But privately aides tell TIME that they have heard shouting matches between Ghani and Khalilzad in Kabul over the last two days, with Khalilzad telling Ghani that he’s got to accept this deal because Afghanistan is losing the war.

The disagreements range from the petty to the existential: Afghan-born Khalilzad won’t give a draft of the Taliban agreement to Ghani, the elected Afghan president, and a university classmate of Khalilzad’s, the aides say. Ghani won’t yield on holding Afghan presidential elections that are likely to hand him another five-year term, complicating the nascent Oslo talks with the Taliban.

Each man has given some quarter, with Khalilzad publicly conceding that it’s likely too late to cancel the Sept. 28 election, and Ghani agreeing to send a delegation to Oslo to start talks with the Taliban in the last week of September, just before the voting. The 15-person delegation includes three women, but the names won’t be announced until just before the talks begin, Afghan officials said.

Everyday Afghans, for their part, don’t know whom, if anyone, to trust. But they know Trump wants out, even if it means outsourcing their conflict to Afghan adversary Pakistan. As the violence continues and horror stories re-emerge of public floggings and summary executions in areas the Taliban control, a grim repeat of their puritanical decade in power until the U.S. drove them out after 9/11 for giving al Qaeda a sanctuary.

Says the Afghan official who participated in the briefings with Khalilzad: “If the U.S. decides to leave, we can’t stop them.” Who in Washington will take responsibility for the decision is another matter.

The original version of this story misstated the service history of Bill Roggio. He served as a soldier in the U.S. Army, he was not an intelligence analyst.

Most Popular on TIME
1
Meet TIME's First-Ever Kid of the Year
2
Who Should Be TIME’s Person of the Year for 2020? Vote Now
3
How HBO's Transhood Normalizes the Experiences of Trans Kids 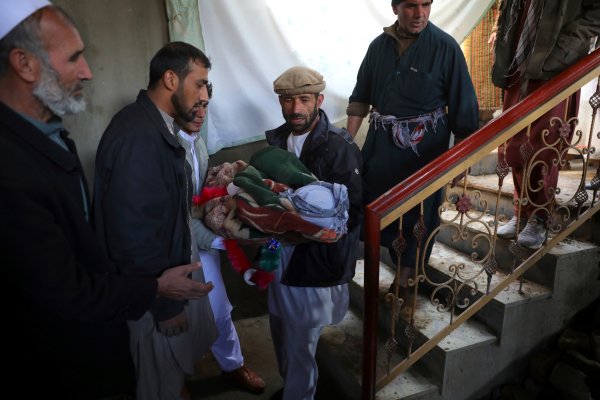