Hurricane Dorian Is Barely Moving at All. Here's Why That Makes It Especially Dangerous

Hurricane Dorian, which slammed the Bahamas early Monday as a catastrophic Category 5 storm, is packing remarkably strong winds — but the storm itself is crawling along, moving at a mere 1 mile per hour early Monday before slowing to “stationary” as of Monday afternoon. The storm’s glacial pace will result in even more devastation, meteorologists say.

With sustained winds of 185 mph and gusts up to 220 mph at the time of landfall in the Bahamas, Dorian made its mark as one of the most powerful Atlantic hurricanes on record. While it was recategorized as a Category 4 storm late Monday morning, with winds of 155 mph, it remains an extremely dangerous storm, forecasters say. In part, that’s because it’s moving so slowly. Adam Douty, a meteorologist with AccuWeather, says Dorian will move as slowly as 1 or 2 mph “for the next 12 hours or so.”

For those in Hurricane Dorian’s path, that’s a big cause for concern. A slow-moving storm “makes the flooding worse, you have continued battering with the wind so it has time to weaken structures, and once they’re weakened it could damage them further,” Douty says. In addition, Dorian will likely cause significant coastal erosion along the coast with “hours and hours of waves” in the Bahamas.

What’s slowing Dorian down? Hurricanes are steered by upper-level winds in Earth’s atmosphere. Forecasters say Dorian has slowed down because a high pressure ridge that was steering the storm westward has weakened. Now, the storm is essentially waiting for another external force before it starts moving quickly again.

“We’re kind of in a holding pattern. There’s nothing to steer it basically until Tuesday, when it starts to get a nudge,” Lance Wood, a meteorologist at the National Weather Service, tells TIME. “It’s just stuck, there’s no large-scale wind moving it right now.”

Douty adds that a cold front moving across the Great Lakes could eventually start pulling Dorian northward, but that would not happen until later on Monday at the earliest.

As of late Monday morning, Hurricane Dorian is expected to approach the Southeastern U.S. late Tuesday into early Wednesday before winding its way up the eastern seaboard. Earlier projections suggested Dorian would make its way more inland and hit Florida over Labor Day weekend.

Despite the downgrade to a Category 4, Hurricane Dorian remains extremely dangerous. As TIME has previously reported, “a Category 4 hurricane will blow out most windows on high-rise buildings, uproot most trees and will likely down many power lines. Power outages can last for weeks or even months after storms of this level. Water shortages are also common in the aftermath of Category 4 hurricanes, potentially making the affected area uninhabitable for weeks or months.”

The latest forecasted track for Hurricane Dorian as of 11 a.m. ET on Monday, Sept. 2.
NOAA

The hurricane’s effects on the Southeastern U.S. are not expected to be “anywhere near as dangerous as what the Bahamas has seen,” Douty says. The Bahamas will likely face the worst damage caused by the storm from Sunday morning until Monday afternoon, he adds.

“(Dorian is) basically not moving and spinning over the Grand Bahama,” Wood says. “We’re expecting (Dorian) doesn’t make landfall in the U.S., but we still could see some hurricane-force winds right along the immediate coast. That’s why there are some watches and warnings.”

A hurricane warning is in effect for parts of the Florida coast, while northeastern Florida and parts of the Georgia coast are under a hurricane watch. A warning means hurricane conditions are imminent, while a watch means they are possible.

Florida is expected to face the worst of Hurricane Dorian from mid-Tuesday into Wednesday. By then, Dorian could be a Category 3 storm, but still potentially dangerous. The hurricane is then expected to move towards coastal Georgia on Wednesday night and arrive in the Carolinas later on Thursday, by which time it could be a Category 1 storm, Douty says.

As long as the core of the hurricane stays offshore, the impacts could be limited to power outages and wind damage to trees, Wood says. Still, even “a small deviation to the west could bring a little more wind and water.”

Dorian is expected to gradually weaken as it makes its way north into colder waters or onto land. 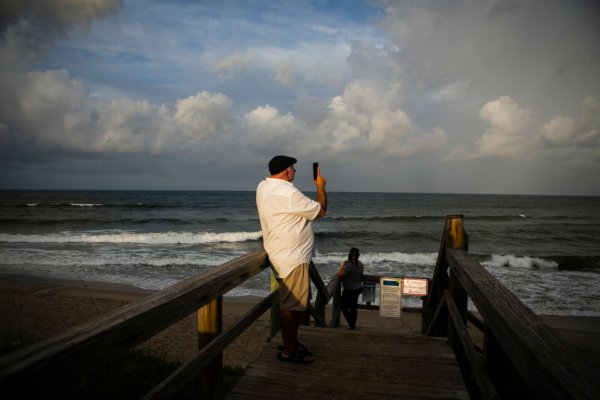 At Least 1 Million Under Hurricane Evacuation Orders
Next Up: Editor's Pick