(Bloomberg) –– President Donald Trump said he canceled a trip to Poland this weekend because Hurricane Dorian is poised to strike Florida, and will send Vice President Mike Pence in his place.

Trump said he would remain in Washington “to ensure that all resources of the federal government are focused on the coming storm.” He said he had called Polish President Andrzej Duda on Thursday to inform him of the change in plans.

“The storm looks like it could be a very, very big one indeed,” Trump said. “Mike will be going.”

Airlines are considering whether to cancel flights, cruise lines are rerouting ships in the region and travelers are rethinking Labor Day holiday plans as the storm approaches.

About 17.5 million Americans were expected to fly during the Labor Day weekend, according the trade group Airlines for America, with Friday typically the busiest day. But that’s when the U.S. National Hurricane Center says the state could start feeling the storm’s early effects.

Florida Governor Ron DeSantis, a close political ally of the president, declared a state of emergency on Wednesday. On Thursday he expanded it to include all 67 counties, compared with 26 in his original executive order. He said he took the step due to Dorian’s “uncertain projected path,” according to an emailed statement.

Florida will again be a critical swing state in the 2020 elections. Trump has suffered criticism for his response to Hurricane Maria, which devastated Puerto Rico and killed about 3,000 people in 2017.

Trump had planned to arrive in Poland on Sunday for a two-day visit, ostensibly to commemorate the 80th anniversary of World War II. But the timing had added significance in Poland as its Oct. 13 parliamentary elections approach.

For Duda, hosting Trump was a chance to show he’s in favor with the U.S. — viewed as the ultimate guarantor of Poland’s security — to boost the standing of his Law and Justice party ahead of the vote. Trump, meanwhile, planned to highlight lucrative energy and defense deals as evidence that his foreign policies are creating manufacturing jobs in key U.S. swing states. 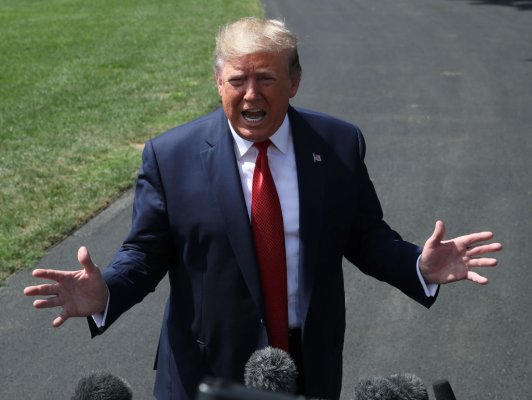 Trump Denies Wanting To Nuke Hurricanes
Next Up: Editor's Pick