Paul Kehmeier is a fourth-generation farmer from western Colorado. One hundred and twenty years ago, his great grandfather Wilhelm Kehmeier bought land in Delta County, dug an irrigation ditch to bring water from a nearby stream, and got to work planting. The Kehmeier family has been farming on the same land ever since, growing alfalfa, hay and oats. But a few years ago, Paul Kehmeier did something unusual: he decided not to water about 60% of his fields.

He was one of a few dozen farmers and landowners in Wyoming, Colorado, Utah, and New Mexico—the four states comprising the upper basin of the Colorado River— who volunteered for a pilot program meant to test out a new water-conservation strategy: paying farmers to temporarily leave their fields dry, to save the Colorado River.

“I participated in the pilot program because we ought to live in the reality over here in Western Colorado,” says Kehmeier. “Demand for water is increasing, and supply surely isn’t increasing.”

Every single drop of Colorado River water is currently spoken for, used by cities, farms and industry across the western U.S. and Mexico. In most years, the river goes dry before it reaches the Gulf of California, and demand for its water is only expected to increase as populations grow in cities across the Southwest. Compounding the problem, climate change is leading to hotter and drier weather, projected to diminish the Colorado’s annual flow by as much as 30% by 2050.

But scarcity is the mother of invention, and western states are coming up with innovative ways to save water. One was a pilot program which ran from 2015 to 2018 and paid farmers—including Kehmeier—about $200 for every acre-foot of water that they had the right to but did not use.

An acre-foot is about 326,000 gallons, the amount of water needed by two average American households for a year. Over the course of four years, the pilot program sponsored 64 projects, conserving an estimated 46,000 acre-feet of water. There was so much interest in some districts that participants had to be selected via a lottery system. Participating farmers closed off some of their irrigation canals, allowing water that would normally go to their fields to flow downstream; at the same time, water administrative agencies and environmental groups like The Nature Conservancy and Trout Unlimited helped monitor flow rates.

The pilot cost about $8.5 million, with funding coming almost entirely from the major municipalities that rely on the Colorado River, including Denver, Las Vegas and Los Angeles. Now the states in the upper Colorado River basin are exploring how to scale it up. Colorado has formed a series of working groups, set to meet for the first time in September, which will tackle questions like who will foot the bill for a large-scale program (which could run in the hundreds of millions of dollars), how to ensure participating farmers are legally allowed to lease out their water rights, and what sort of mechanisms can safeguard conserved water as it makes its way to reservoirs.

The Colorado River isn’t the first basin to look to a water market in times of scarcity; the results elsewhere have been mixed. California relied on a water market in the 1990s to successfully navigate a drought; since then the state’s water market has remained active but muted, largely due to cumbersome regulations and prohibitively high transaction costs. Chile has had a national water market since the 1980s, which has led to some beneficial redistribution of water but also to “speculative hoarding of unused water rights,” according to a 2014 academic paper.

Perhaps the clearest success story is the market established in Australia’s Murray-Darling river basin. During the so-called “Millennium Drought” from 2001 to 2009, the Murray-Darling water market saved the region as much as AUS$11.3 billion by allowing cities and producers of high-value crops to purchase water from willing sellers. There were also environmental benefits, since the government could spend a few billion Australian dollars to acquire water rights for the river itself. There are now online marketplaces with real-time pricing, allowing buyers and sellers to trade water with ease.

The success or failure of water markets is largely shaped by unique state and regional water laws, hydrology, agricultural practices and goals. For example, the severe drought in Australia during the 2000s catalyzed the government to pass a series of reforms, which were unpopular, but worked, by reshaping the country’s water laws, centralizing oversight of much of Australia’s water use and clarifying water rights in order to make them more tradable. Water rights in the American west are still regulated by individual states, and an overhaul like the one in Australia would certainly run up against enormous political resistance. Still, the example shows that despite the challenges, water markets can work.

Not everyone is thrilled about the possibility of a water market in the upper Colorado River. “Let’s be honest about what it is that we’re doing here: paying farmers not to farm, and drying up land to buy water,” says David Harold, a sweet-corn farmer from Olathe, Colorado, who participated in the pilot program for one year. “This is ‘buy-and-dry’ with another name,” he says, referring to the practice of cities buying land purely for the water rights tied to them, leaving rural communities parched and jobless.

Harold isn’t the only skeptic. “Every single person I interviewed mentioned ‘buy-and-dry,’” says Kelsea MacIlroy, a PhD student at Colorado State University who interviewed 34 irrigators and water experts in western Colorado to understand local perceptions of a demand management program, which is a technical name for a water market where farmers can lease out their water. “People said ‘maybe it’s not exactly the same thing, but we’re afraid that demand management could lead to ‘buy and dry.’’’

Water in the arid West has long been a hot commodity, and farmers and ranchers, who hold most of the water rights in the region, have often felt like they have a target on their backs.

Consider Crowley County, in southeast Colorado. Until the 1970s, Crowley was farm country, growing vegetables and grains, and raising livestock. Then the nearby municipalities of Colorado Springs, Aurora and Pueblo began to buy up the county’s water rights. In a few decades, Crowley was left with less than 10% of the water it once had. Irrigation ditches dried up and the farming economy collapsed; of the 60,000 acres that once made up Crowley’s pastures and farms, only about 7% are farmed today, and barren fields stretch for miles.

Some, like Harold, see a water market as putting their counties on the road towards becoming another Crowley. But others view a demand management program as a way to avoid the fate of Crowley County. As the pressure mounts along the Colorado River, something’s got to give, and a water market—in which farmers choose to lease their water out for a set period, regaining it again when the program times out—is a more palatable option than selling their water entitlements outright. “Demand management is different than ‘buy and dry’ because it leaves the water in the hands of the farmer,” says Kehmeier.

For a demand management program to significantly reduce water security risks along the Colorado River, it will need to attract a lot of farmers and funding. Policymakers are envisioning a scaled-up version of the pilot that could lease out as much as half a million acre-feet of water by 2026, costing around $100 million. But even that won’t keep the Colorado River from over allocation. That’s why, MacIlroy says, some of the irrigators she spoke with felt demand management “was a Band-Aid and that there’s no point in continuing that conversation unless there are efforts being made to address the larger issues in the Colorado River.”

The root of the Colorado River’s over-allocation problems can be traced back to 1922, when its water was divided up between the seven states that used the river. No one at the time understood that the water allocations were based on bad data—the early 1900s were an especially wet period, with more snow and rainfall than normal. The result is that there is more water promised on paper than flows annually in the river, by over one million acre-feet.

Over allocation didn’t matter in the past, because not everyone was using all the water to which they had rights, and the region experienced good snowpack in the 1980s and early 1990s. And so, over the years, much of this unused water was saved up in reservoirs. But now, with more people in the West demanding more water, and an ever-hotter climate with less snow and rain, the bank account is shrinking. The goal of the proposed demand management program is to help close the gap between supply and demand, saving water during wet periods and storing it in the Lake Powell Reservoir, on the border between Utah and Arizona, from which it can be released during dry periods.

Experts who have worked on the demand management pilot program acknowledge that it isn’t a silver bullet for all the Colorado Basin’s problems. But they believe it can play an important role in reducing the water-security risk in the area. “If things get worse, we need to be ready, and I think that [a] 500,000 acre-feet account in [Lake] Powell is a good start,” says Aaron Derwingson, Water Projects Director for The Nature Conservancy’s Colorado River Program.

It is hard to overemphasize how important the Colorado River is for the American West. It provides drinking water for more than 40 million people, electricity for some 780,000 homes, and irrigation for nearly 5 million acres of farmland. As the river confronts the triple threats of climate change, population growth and over allocation, competition for water will likely increase.

Mark Twain supposedly said, “Whiskey is for drinking; water is for fighting.” The Colorado River has lived up to this ethos, with states long having fought for a larger share of the river. Demand management presents a potential way out, engendering collaboration instead of competition. It could also provide a template for what will certainly be a growing issue in shared water systems across the globe. “The Colorado is a famously hardworking river,” says Derwingson. “If we can create a demand management program that works for such a complex system, people will take notice—it would highlight a pathway to deal with water scarcity in an unpredictable world.”

Reporting for this story was supported by The Nature Conservancy. 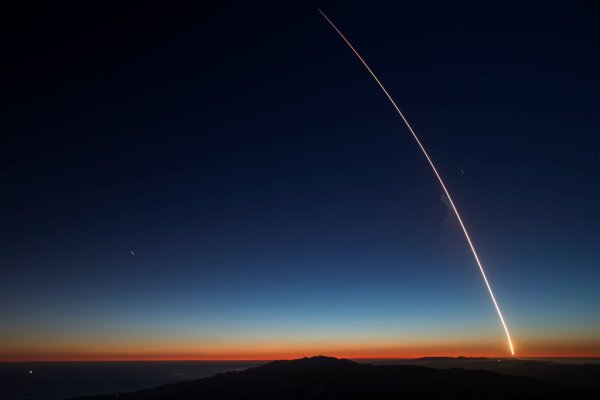 A European Satellite Had to Fire Thrusters to Avoid Colliding With a SpaceX Satellite
Next Up: Editor's Pick