Since their marriage in 2012, Hollywood stars Ryan Reynolds and Blake Lively have shared a relationship in the spotlight (as well as two daughters). But instead of shying away from the public eye as many star pairs often choose to do, the two actors have seemed to have fun with their celebrity status — by trolling each other all the time. From teasing comments to funny one-liners, here are the best times the Deadpool actor has given the former Gossip Girl icon the troll treatment over the past few years.

Aug. 26 was Blake Lively’s birthday, so of course her husband had to mark the occasion on social media. But instead of putting up a glowing post of pretty photos, he chose a series of snaps in which Lively looks a little less than ideal — mostly because her eyes are closed.

Back in 2017, for Lively’s own post for Reynolds’ birthday, she sweetly said “Happy birthday, baby.” Her choice of image, however? A close-up of Reynolds with fellow actor and fellow Ryan, Ryan Gosling. And in her photo crop, Reynolds is mostly invisible, leaving Gosling as the star of the image. (Her 2018 post for Reynolds was much more sincere.)

When Blake Lively joked about cheating on Reynolds with Anna Kendrick

While promoting her movie A Simple Favor with Anna Kendrick, Lively wondered on social media if it would really “count as cheating” if she went for Kendrick over Reynolds. “[She] is the hotter, female(r) version of my husband,” Lively wrote about her co-star. In fact, for most of that movie’s promotional run, Lively made sure to include her husband in some gentle needling.

When Ryan Reynolds joked about divorce

While at Comic-Con in San Diego in 2018, Reynolds fielded some questions about his marriage. “My wife’s been shooting a film overseas so I’ve been having a ton of time to pretend like I’m watching the kids,” he joked at one of the event’s panels. “She’s probably filing [divorce] papers as we speak.” (Over a year later, the two appear to be going strong, as far as we know. In fact, Lively is pregnant with their third child at present.)

When Lively congratulated herself

This Instagram post may look like an image of an adoring wife sharing a celebratory moment with her husband on a red carpet. But no, Lively’s caption says it all: “If there’s one thing I’m infinitely proud of in this picture, it’s the incredible hair styling that I did on myself,” she wrote, drily.

While Lively was pregnant with the pair’s second daughter, Inez, Reynolds was out promoting their partnership with an outdoors brand and an environmental initiative. But there was a hitch: she couldn’t exactly partake in many athletic activities herself at that moment. “My wife is just extraordinarily pregnant, so there’s not a lot of hiking going on, which I’m told is my fault!” he joked to reporters at one point.

Often, female stars are make multiple outfit changes in an evening, between walking the red carpet and attending whatever the event might be. At one such event for a premiere of her movie All I See Is You, Lively called out her husband for only wearing one suit instead of making a switch. “[He] didn’t even do one outfit change from the sidewalk to the inside. (Lazy),” she joked.

When Reynolds called out his “ex-girlfriend” Betty White

For Betty White‘s 97th birthday in January, Reynolds shared a tweet with a photo of him with the screen icon. “I don’t usually talk about ex-girlfriends,” he wrote, “But Betty’s special.” Sorry, Blake Lively: looks like Reynolds still harbors feelings for this one. 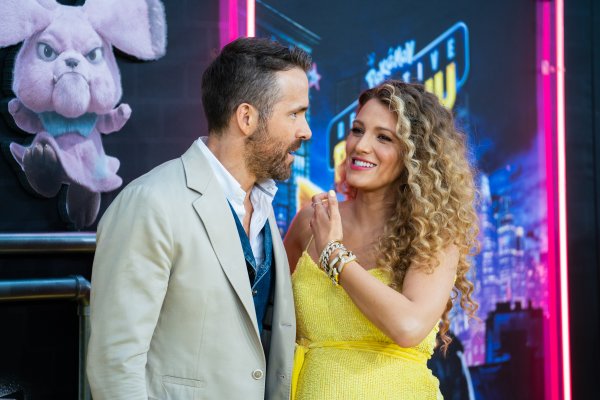 Ryan Reynolds Wishes Blake Lively a Happy Birthday By Trolling Her Mercilessly With a Slideshow
Next Up: Editor's Pick