Three men had entered Avianne & Co in New York City’s Diamond District, an area in Midtown Manhattan known for its cluster of jewelry stores and dealers, around noon. At first, they asked about buying jewelry, according to the New York Police Department. Then, however, two of them pulled out their guns and forced four people in the store to a back room, where they were zip-tied and duct taped. An employee later got loose and called 911, according to a police report.

No serious injuries were reported as a result of the incident.

The thieves stole jewelry from the safes and display cases before fleeing eastbound. Security footage released from the scene appears to show clear pictures of all three men’s faces, and police are appealing for help identifying them.

Security footage taken as the three men left the store appears to show them all carrying duffel bags; CBS2 New York reports the store was “cleaned out,” and quoted a man who spoke with one of the people in the store during the robbery: “He told us, ‘Yeah, we got robbed. It was crazy.’ He said thank God nobody was injured… He said they stole like $4 million worth of retail.”

Police have not yet publicly stated how much jewelry was taken (or its value).

Avianne & Co describes itself on its Facebook page as “the leading custom diamond jewelers in hip hop and pop culture,” catering to customers reportedly including Nicki Minaj, Lil Wayne and Cam’Ron.

The store was not immediately available for comment on Monday. 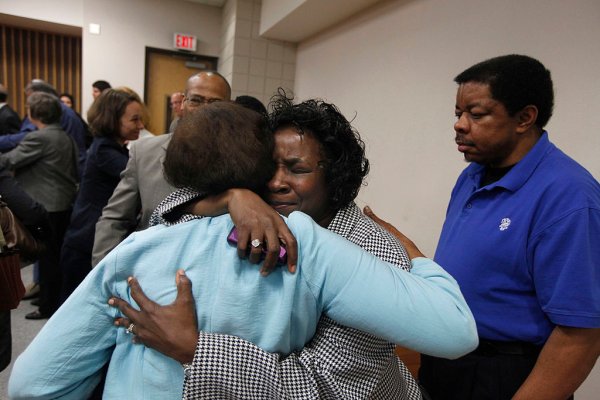 Their Death Sentences Were Overturned Because of Racial Bias. Now North Carolina Might Leave Them Back on Death Row
Next Up: Editor's Pick