Banksy's Brexit Mural Has Disappeared From the Side of a U.K. Building

A painting depicting a workman chipping away at a star on the E.U. flag by artist Banksy is seen in Dover, England, on Jan. 3, 2019.
Leon Neal—Getty Images
By Hillary Leung

Banksy’s mural depicting a worker chipping away at a star on the flag of the European Union has disappeared from the side of a building in a coastal English town, CNN reports.

The artwork, symbolizing the U.K.’s impending exit from the E.U., had become a tourist landmark in the southeastern port city of Dover, which connects the U.K. with mainland Europe. The mural was painted in May 2017, a month before a general election at which Brexit-related discussions took center stage.

According to a resident, a scaffolding platform was pitched next to the building Saturday and the mural was gone the next day.

“Just glad I captured this original @banksy artwork before it was painted over — think it’s unfair that someone decides to ruin another’s piece of art,” wrote one Instagram user, posting a dated picture of the mural.

“Why??? I can’t understand why they’ve whitewashed this masterpiece, it’s an absolutely tragedy,” another user on Facebook wrote.

The mural has been confirmed, as per the secretive artist’s Instagram page, to be his genuine work. Known for his politically charged art, the elusive graffitist has left his mark at hundreds of locations around the world, his creative satire touching on issues including the European migrant crisis and Israel-Palestine relations.

The family that owned the property on which the mural was painted said shortly after the work was erected that they were looking at options to sell the artwork to a London gallery, with proceeds to go to charity.

Last year, the artist pulled a million-dollar prank after his famous “Girl with Balloon” was automatically shredded in its frame after it was sold at Sotheby’s auction house in London.

Banksy has yet to address the disappearance of his Brexit-inspired art. The U.K. is due to leave the E.U. on Oct. 31 after delays in working out an exit deal. 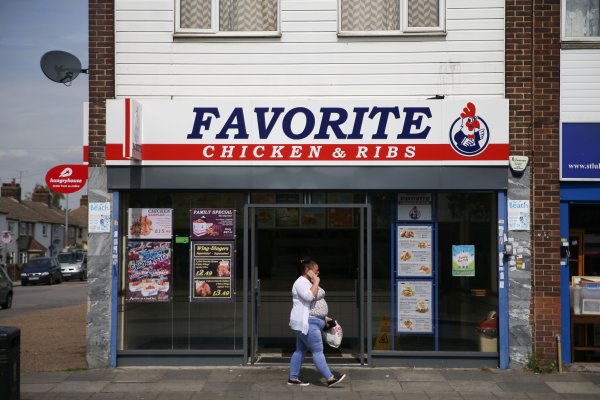 'Racist, or, at Best, Unfathomably Stupid.' Britons Finding it Hard to Swallow Campaign to Curb Knife Crime With Ads on Fried Chicken Boxes
Next Up: Editor's Pick