Everything We Learned About Frozen II From the D23 Footage

Disney dropped a sneak peak of Frozen II at its annual D23 convention in Anaheim on Aug. 24. The scenes involved Elsa being drawn out of her castle by a mystery from her past.

The creators of the film promised that the film will answer questions like, why does Elsa have powers? Where were Anna and Elsa’s parents going when their ship went down? And does “happily ever after” even exist? The movie will hit theaters Nov. 22.

Frozen was a phenomenon when it debuted back in 2013, becoming the highest-grossing animated film ever. Since then, the popular movie about a princess with powers to turn the world cold and her brave-hearted sister have spawned an a Broadway show, a short film, a theme park ride and thousands of imitations and parodies. Now, it’s finally getting a sequel.

Robert Lopez and Kristin Anderson-Lopez will return as the songwriters for the film. Kristen Bell (who plays Anna), Idina Menzel (who plays Elsa), Josh Gad (Olaf) and Jonathan Groff (Kristoff) took the stage at D23 to sing one of their new original songs.

Here’s everything we learned about the movie at D23:

The film will begin in the past

Disney has a tendency to kill off parents. But Anna and Elsa’s parents are coming back in the sequel — for a scene. The movie will begin with a prologue set in the past. The flashback will feature the princesses’ mother, voiced by Westworld star Evan Rachel Wood. In a scene shown at D23, the mother sings to her two young daughters to help them fall asleep. Anna later sings that song to Elsa to comfort her.

That song seems to trigger some memory in Elsa. She keep hearing singing that nobody else can hear. In the footage, Elsa sings a song about trying to ignore her secret siren. But inevitably she is drawn into the unknown to solve the mystery about her past that is beckoning to her. She sings that while she’s surrounding by everyone she loves, there’s a part of her that knows she’s not where she’s meant to be.

We’ll find out how Elsa got her powers

Directors Chris Buck and Jennifer Lee (who is also the head of Disney animation) said that the biggest inspiration for the film was the question they heard most from fans: How did Elsa get her powers?

They will go on a quest

Ultimately, Elsa isn’t happy with tranquility. She wants to explore the unknown. This sends the sisters on some sort of journey that likely involves the story of how Anna got her powers and what her parents’ plan was when they ventured away from their kingdom. This Is Us star Sterling K. Brown is also joining the cast as a lieutenant who helps Anna and Elsa in their mission to find answers about their parents.

Kristoff will propose to Anna

At the beginning of the movie, Anna, Elsa, Kristoff and Olaf play charades together with clues like villain and Elsa. During the game, Elsa hears a sound from afar and suddenly leaves.

With the the room clear Kristoff gets down on one knee and tries to propose to Anna, but Anna doesn’t notice as she tries to go check on Elsa. It’s sure to be a plot point throughout the film. 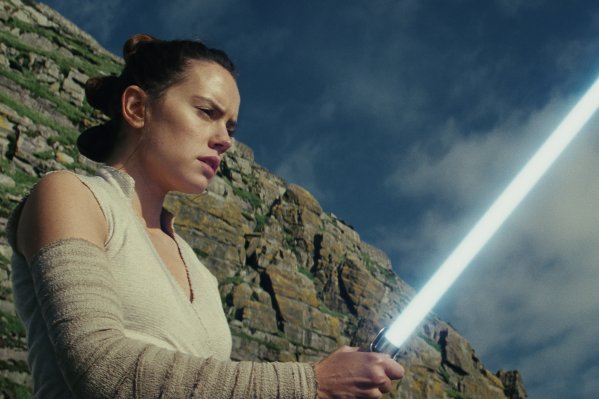 Will Rey Turn to the Dark Side in Star Wars: The Rise of Skywalker?
Next Up: Editor's Pick