Salman Rushdie’s Quichotte Is a Fantastical Dream Within a Dream

Quichotte, the Booker Prize long-listed 14th novel from Salman Rushdie, is pitched as a “Don Quixote for the modern age,” but the book–a brilliant, funny, world-encompassing wonder–is a far more ambitious exercise than mere homage.

The titular character (pronounced Key-shot) was born under a different name, in a city also under a different name: Bombay, now Mumbai. The Indian-immigrant traveling salesman of pharmaceuticals, aging, addled into holy foolishness by a lifetime of TV worship, and recently laid off, bestows the name Quichotte upon himself as a nod to Cervantes’ famous knight, or rather, as a nod to a French opera which was “loosely based” on the book. (“It seems you’re a little loosely based yourself,” Quichotte tells himself, aware that he might be cracking up a bit.)

Under his nom de plume, he embarks on a picaresque mission across America to win over the heart of one Salma R, a beautiful celebrity in New York City whom he knows only through the TV screen. For a squire to ride beside him in his Chevy Cruze, he conjures into being a son, named Sancho. Quichotte is delighted to find out that the world, in its fraying state, seems to bend under the strength of his conviction, which bodes well for his impossible dream. “The Age of Anything-Can-Happen! How overjoyed he was, Quichotte exclaimed inwardly, how grateful he was to live in such a time!” In this latter age of man, the narration continues, “A whole nation might jump off a cliff like swarming lemmings. Men who played presidents on TV could become presidents. The water might run out … And a TV star might miraculously return the love of a foolish old coot, giving him an unlikely romantic triumph which would redeem a long, small life, bestowing upon it, at the last, the radiance of majesty.”

But wait — we learn that Quichotte and Sancho are characters twice removed, the fictional subjects of a book being written by a midlist author of middling spy fiction named Sam DuChamp, who hopes to branch out into meaningful work with “a book radically unlike any other he had ever attempted.” Like his main character, he is also an Indian immigrant operating under a nom de plume, also in the autumn of his years, also dragging behind him into an unknown future a knotted and dysfunctional family history. If Quichotte has been deranged by his consumption of media, the man who is writing him into existence has been deranged by his creation of it.

DuChamp describes the full scope of the book that he is trying to write, which also happens to describe Rushdie’s project: “He talked about wanting to take on the destructive, mind-numbing junk culture of his time just as Cervantes had gone to war with the junk culture of his own age. He said he was trying also to write about impossible, obsessional love, father-son relationships, sibling quarrels and, yes, unforgivable things; about Indian immigrants, racism toward them, crooks among them; about cyber-spies, science fiction, the intertwining of fictional and ‘real’ realities, the death of the author, the end of the world.”

You would be right to think that for a writer to take all of this on at once would be to risk a mess of a novel. But in Rushdie’s hands all borders are indeed porous: between author and subject, reality and magic, hope and folly. As he weaves the journeys of the two men nearer and nearer, sweeping up a full accounting of all the tragicomic horrors of modern American life in the process, these energies begin to collapse beautifully inward, like a dying star. His readers realize that they would happily follow Rushdie to the end of the world, which it turns out they will have to do.

If the writer is his work, and the work is its characters, then they all die together. Like any serious book, this one is written with a long view toward the apocalypse, and the one written here is shared evenly: the end of the book, the end of Quichotte, the end of the author, and the end of the world. And yet somehow, a glimmer of hope, like an impossible dream, is left for us.

Nicholas Mancusi is the author of A Philosophy of Ruin. 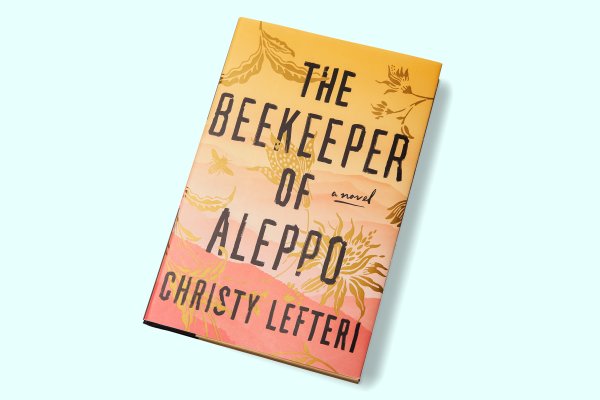 A New Novel Sees Beyond the Abstraction of Today's Refugee Stories
Next Up: Editor's Pick