“I learned that I’m capable of a lot of things. I��learned to fight,” Coco Gauff, describing lessons from Wimbledon, where she advanced to the fourth round.
Jane Stockdale—The New York Times/Redux
By Sean Gregory

After an astronomical rise, re-entry can feel strange. When Coco Gauff, 15, came back to her hometown of Delray Beach, Fla., in July, following a star turn at Wimbledon where she defeated her idol Venus Williams and became the youngest woman to reach the fourth round of the world’s most prestigious tennis tournament since Jennifer Capriati in 1991, she found a lot had changed. One Saturday afternoon, the gym in which she sometimes shoots hoops with her father hosted a packed homecoming celebration in her honor. She also quickly learned to leave a few minutes earlier for appointments, since strangers inevitably stop to ask her for a selfie.

On one of those Florida summer mornings when the temperature reads 87°F but it feels like 150°F, wide-eyed admirers wandered over to a court where she was conducting a routine training session, not quite believing that was actually Coco Gauff working on her serve. “Is there an admission charge to watch?” one guy asked. (No, replied Coco’s dad Corey. If you want to stand in this heat, he said, we should pay you.) A fellow from Amsterdam, in town visiting friends, came by to offer his respects. An older woman told Gauff she was so proud of her, and just lingered before finally leaving for her pickleball game.

Eventually a group of kids from the Delray Beach Youth Tennis Foundation, who happened to be attending a clinic a few courts over, migrated toward Gauff. Her agent had told a foundation rep she was too busy practicing to stop for a picture. But during a break, Gauff wasn’t about to keep at arm’s length from newfound fans–especially ones her own age. “Can I have a hug?” asked one girl before a group shot. Gauff obliged.

“How did you feel at Wimbledon with all those eyes on you?” asked a boy. Gauff’s reply: “I tried to pretend I was here.”

That mind trick worked wonderfully, as Gauff showed that no moment will overwhelm her. A few days after taking a science exam, she nonetheless managed her 6-4, 6-4 first-round win over Williams, a five-time Wimbledon champ, on July 1, capturing the world’s attention. “On my science test, I got a B,” Gauff said afterward. “Today I would give myself an A.” Even better, she wasn’t done with her high-grade play.

“Some people were probably saying this was one time, this was the match of her life,” Gauff says while eating zucchini pasta for lunch at a Delray Beach restaurant that blares classic rock songs that are nowhere near her playlist. She sometimes stretches a braid across her chin while talking. “I had those thoughts as well.” So she immediately put the Venus win behind her and pulled off two more victories, including a three-set comeback thriller on Centre Court against Polona Hercog, who had two match points but couldn’t put the teen away. “I learned that I’m capable of a lot of things,” says Gauff. Her magical run didn’t end until a fourth-round loss to eventual champ Simona Halep, who defeated Serena Williams in the final. “I learned to fight.”

Gauff earned social-media shout-outs from A-listers like Michelle Obama–the pair met in D.C. in August–Magic Johnson, Snoop Dogg and Jaden Smith, one of her favorite singers. Her Instagram following, 30,000 before Wimbledon, is nearly 400,000. Companies of all kinds–airlines, hotels, banks, cosmetics makers–have reached out to discuss possible sponsorship deals. Seven years ago, Gauff attended Arthur Ashe Kids’ Day at the U.S. Open as a spectator. This year, she’ll take the stage and sign autographs in New York as a featured guest before playing in the tournament’s main draw.

Tennis cognoscenti have long rushed to anoint the “next Serena,” an unfair label for any young player trying to make her way. Gauff shone in a single Grand Slam tournament, and she’s not yet old enough to drive a car, though she could surely afford one with her $227,786 in Wimbledon winnings. But her breakout effort is far from a fluke. Two years ago, she was the youngest to ever reach the U.S. Open girls’ final. In May, she became the youngest player to win a women’s qualifying match at the French Open. Gauff arrived ahead of schedule. And she declines to tamp down expectations.

Gauff’s always been a step ahead. Her mom Candi, who ran track at Florida State, says her daughter could recognize letters, in any font, when she was 2. She’d keep up with her 10-year-old cousins on a track when she was 3. While most kids nod off in church or stare at the ceiling on field trips, Gauff would take notes. In preschool, she drew a picture of her favorite food: broccoli.

Corey, who played point guard at Division 1 Georgia State University, got his daughter a pink racket when she was 4: she’d spend hours hitting a ball against the garage. After Coco finished second grade, they moved from Atlanta to Delray Beach, where Corey and Candi had grown up, to give Coco access to better tennis training. Candi started homeschooling her, which gave Coco more-flexible hours to practice. (She’s starting 10th grade.)

At Wimbledon, Hercog remarked that Gauff is “probably older in her head than the numbers show.” Gauff agrees with that assessment, tennis-wise. “Off the court,” she says, “I don’t feel mature.” In other words, she feels 15. She still plays hide-and-seek in the house with her brothers Cody, 11, and Cameron, 6; Cody accidentally broke her Junior Fed Cup trophy during one game. When their mom tells them to stop throwing stuff around, they often ignore her. “We’ll do anything,” Gauff says, “just to make my parents mad.”

Gauff says she’s never been on a date. “But I help my friends a lot,” she says. “I’m more a wingwoman.” She plans to get her learner’s permit after the Open but has no plans to start staying out late, since tennis wears her out enough. “The only reason I want my license,” she says, “is to go to Chick-fil-A.” She doesn’t feel like she’s missing adolescent milestones as she travels the world for tennis. “I want to go to prom and all of that, but I definitely can make time to have that,” says Gauff. Plus, she notes, her friends “don’t really enjoy the high school experience.” That may just be typical teen chatter, but it appears to help spare Gauff any regrets.

For now, Gauff’s all about the game. She’s spent the weeks before the U.S. Open adding more depth to her shots. Parents are often cautioned against setting unrealistic goals for kids, to prevent disappointment. But for years Corey has told his daughter she can be the “GOAT”: greatest of all time. “When you’re young, you just believe anything,” says Gauff. “When I got older, I really believed it for an actual reason, instead of just believing ’cause my dad told me.” So she’s comfortable declaring her intentions. “A lot of people maybe think of it as cocky,” she says. “But I think it’s just confidence. I think I can beat anyone on the court.”

Gauff speaks with conviction, but she’s not brash. She won’t, for example, predict that she’ll pass Serena’s 23 Grand Slam wins. “But I know I can do it,” Gauff says. Lunch ends; as she leaves the restaurant, the maître d’ and a cook pop out to take a picture with her. Welcome to Coco Gauff’s new normal. Which has only just begun. 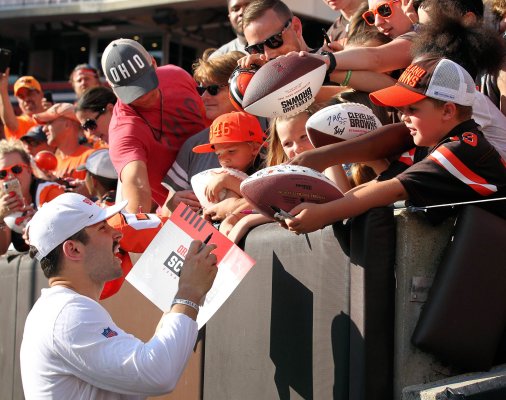 “It's Time.” The Cleveland Browns Are Ready to Start Winning
Next Up: Editor's Pick