Authorities have made an arrest following a multi-day search for a suspect they allege stabbed a California State University, Fullerton employee to death in a “targeted” attack in a university parking lot on Monday.

Around 8:30 a.m. Monday, Fullerton Police responded to a call of a “male down, bleeding from the head” in a parking lot of the campus, located in Orange County. According to Lt. John Radus, when police arrived on the scene they found 57-year-old Hacienda Heights resident Steven Shek Keung Chan sitting inside a silver Infinity with multiple stab wounds across his body. Emergency responders pronounced Chan dead when they arrived on the scene after police attempted life-saving measures, Radus said.

Police said Vo and Chan were coworkers, but didn’t specify a motive. “Beyond them being coworkers, we cannot comment specifically on their work relationship,” Dunn said.

According to a statement from Cal State University, Fullerton President Framroze Virjee, Chan worked as the university’s director of budget and finance and student services for university extended education from 2009 until he retired in 2017. Virjee said Chan returned to campus as a special consultant in early 2019 “to provide his sage guidance and wisdom.”

“Life is so precious and family and friendships so dear,” Virjee’s statement read. “In the coming days, weeks, and months, we will all honor and remember Steven in our own way.”

Police previously said they believe Chan was targeted, and an “incendiary device” was found underneath Chan’s car.

“During the course of the investigation, a backpack, believed to have been left by the suspect, was located underneath the victim’s vehicle,” Fullerton said in a statement released Tuesday. “Inside the backpack, FPD investigators located an incendiary device, along with numerous items that were consistent with a kidnapping attempt or plot, including zip ties, wigs, and other disguise materials.”

Police said they also found a knife, but not the one that was used in the stabbing. Based on the preliminary investigation, police believe Vo acted alone.

Vo is currently in custody on murder charges, but Fullerton Police asserted there is no active threat on campus.

“This was an isolated incident,” Cal State Fullerton President Virjee said at Thursday’s press conference. “We have absolutely no information that would indicate any lingering danger to the health and safety of our campus family.” 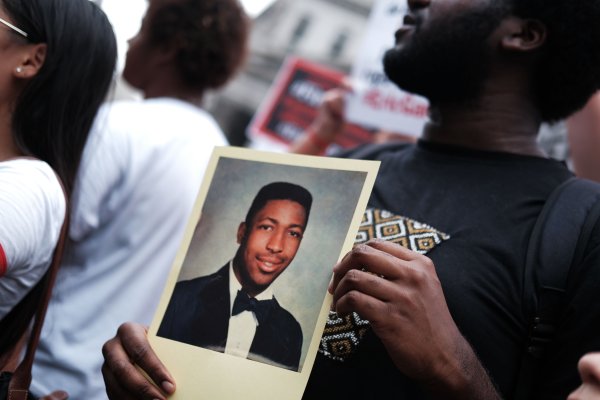 NYPD Fires Officer Involved in Chokehold Death: What to Know
Next Up: Editor's Pick